Hidaka subprefecture is located in the southeastern coast of Hokkaido, the northernmost island of Japan. The area boasts a variety of magnificent nature from the windy sea shores to the ever-changing rivers and the impressive Hidaka mountains, which occupy the lion share of Hidaka’s area. The unique nature of Hidaka has been recognized and there is an initiative to establish a national park in the Hidaka mountains. The amazing nature of Hidaka offers an abundance of activities for the visitors, for example mountain climbing, hiking, kayaking, and canoeing.

Hidaka is known as the area that breeds most of the race horses in Japan and when driving around the area, you can indeed see horses grazing almost everywhere. In addition to that, out of all the subprefectures in Hokkaido, Hidaka has the highest rate of Ainu population—the indigenous people of Japan and Russia, and especially the town of Biratori as a tour destination has attracted people interested in Ainu and their culture for over a 100 years.

In this blog post, you can learn about the breathtakingly beautiful nature of Hidaka and what to do in the area during your off-the-beaten-path adventure travel.

Hidaka subprefecture (which will be referred to as ‘Hidaka area’ from this on for comfort’s sake), located in southeastern coast of Hokkaido, is quite easily reachable from both Sapporo and the Chitose airport by a private car. The land area of Hidaka stretches along the coastline, so the distance and time required for traveling depends of course on your travel destination. The towns in the Hidaka area are the following from east to west: Biratori, Hidaka, Niikappu, Shinhidaka, Urakawa, Samani, and Erimo. Actually, the town of Biratori is not located at the coast but about 15 kilometers (9 miles) further inland in the Saru river valley. 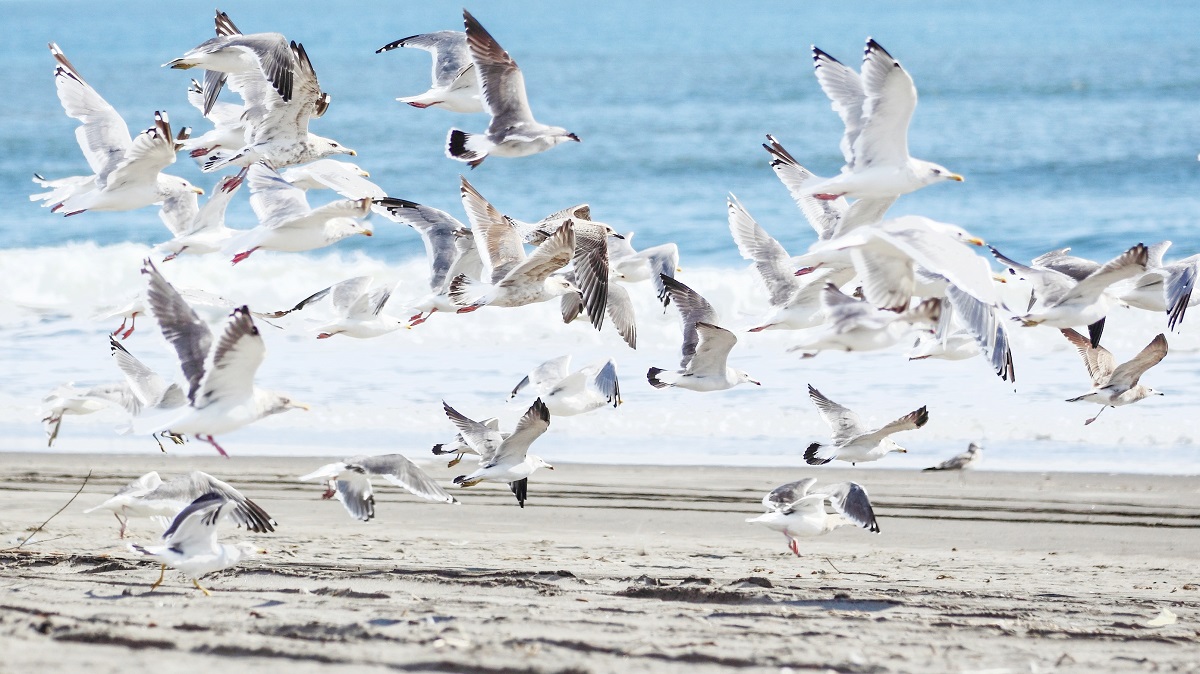 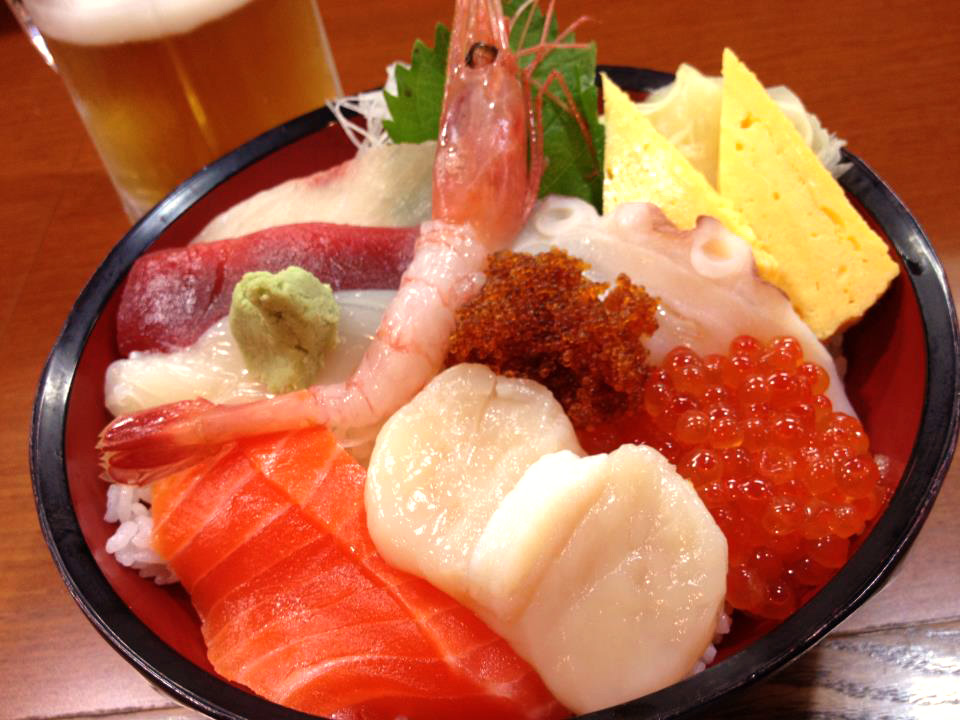 The Hidaka area is located by the coast, so it is famous for its abundant seafood. The coastline of Hidaka is long and you can catch here almost any type of seafood you can imagine: fish, such as salmon, shishamo smelt, and cod, several types of shellfish, squid, octopus, shrimp, crab, sea urchin, and kombu kelp. If you can’t decide which mouthwatering delicious seafood to choose on your plate, a kaisendon or a bowl of rice topped with a variety of seafood is a perfect choice for you. 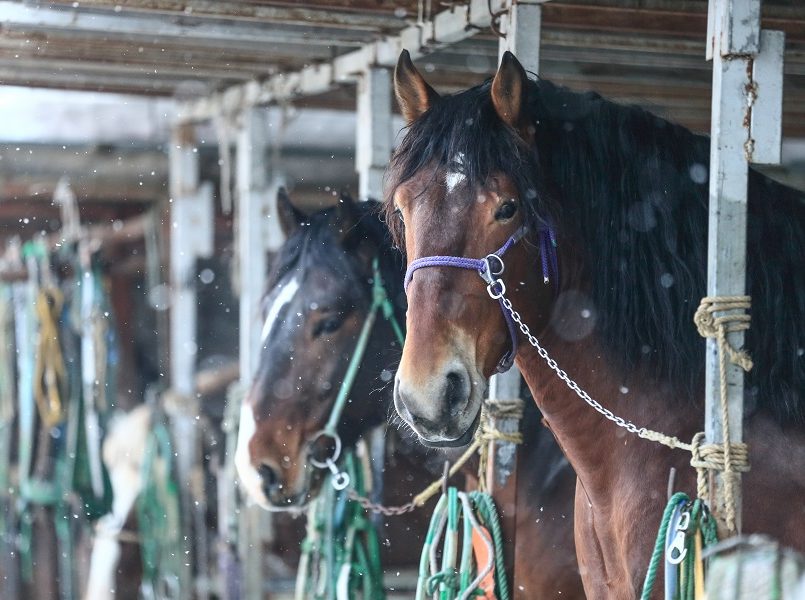 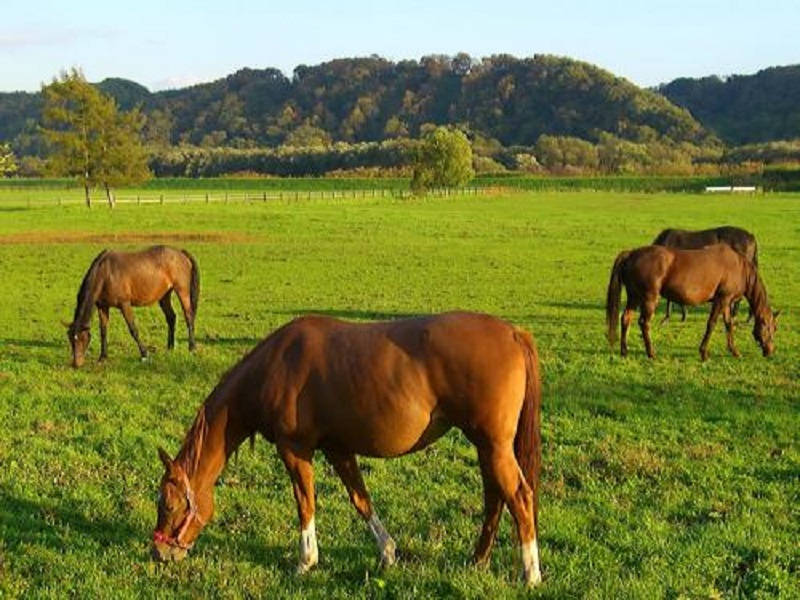 Hidaka is also known as a horse breeding region and it’s especially famous as a race horse breeder. Hokkaido and Hidaka have been producing working horses for agricultural needs for a long time but after World War II, the breeding shifted to race horses. Today about 95% of thoroughbreds in Japan are raised in the Hidaka area. Urakawa town alone has about 300 ranches. The Hidaka area is especially suitable for the job because it has a dry, cool climate even during the summer and there also is a lot of space for horse breeding. The landscape at the eastern side of Hidaka area is relatively flat with occasional mountain and river here and there, and this is where you can see the horses grazing on the numerous ranches of Hidaka.

The name of the area, Hidaka, comes from an ancient Japanese history record called Chronicles of Japan (Nihon Shoki) dated back to the year 720. A place called Hidaka is mentioned in the chronicles but the place’s actual location is unknown, so the area and the history records do not in reality have a connection. Both the towns of Hidaka and Shinhidaka at the shores of the Pacific Ocean have also got their names from the same source. Shinhidaka means literally ‘New Hidaka’ and it was formed when the towns of Shizunai and Mitsuishi were merged.

The other towns’ names come originally from the Ainu language. Biratori comes from ‘pira utur’ and means ‘between the cliffs’ in English (it refers to a place where the Saru river flows between cliffs). Niikappu comes from ‘ni kap’, which means ’tree bark’ (it was an area where Ainu used to peel tree bark from the trees to make fiber for their clothes). Urakawa comes from ‘uraka’ and means ‘intestines’ in English (Ainu used to hunt and fish around Urakawa and there was a certain place where they would disembowel the catch and leave the intestines there, hence the name). The etymology of Samani is a bit unclear, but ‘esaman pet’ or ‘sam an i’ are suggested and they mean ‘otter river’ and ‘the thing (river) that is on its side’ respectively (the second one refers to the way the river flows along the sea coast at a certain place). Lastly, Erimo ‘enrum’ or ‘erum’ means ‘a cape’ or ‘a mouse’ (the first one refers to the cape Erimo and the second one hints that there has been a lot of mice there).

The Ainu people in Hokkaido and Hidaka area

The Ainu are the indigenous people of Japan and Russia. Their traditional living area extended from the northern parts of Japan’s main island Honshu, to Hokkaido, southern parts of Sakhalin, the Kurile islands, and the southern tip of Kamchaka peninsula. Hokkaido is called Aynumosir or Yaunmosir in Ainu’s own indigenous Ainu language. Ainu used to be hunter-gatherers until the late 19th century and the traditional occupations of the Ainu included deer and bear hunting and salmon fishing, tree bark cloth weaving, embroidery, and wood carving. The Japanese living in Matsumae and other places in the south of Hokkaido started slowly to enter further and further in the Ainu lands in Hokkaido and in 1868 the Japanese government decided to make Hokkaido a part of Japan. 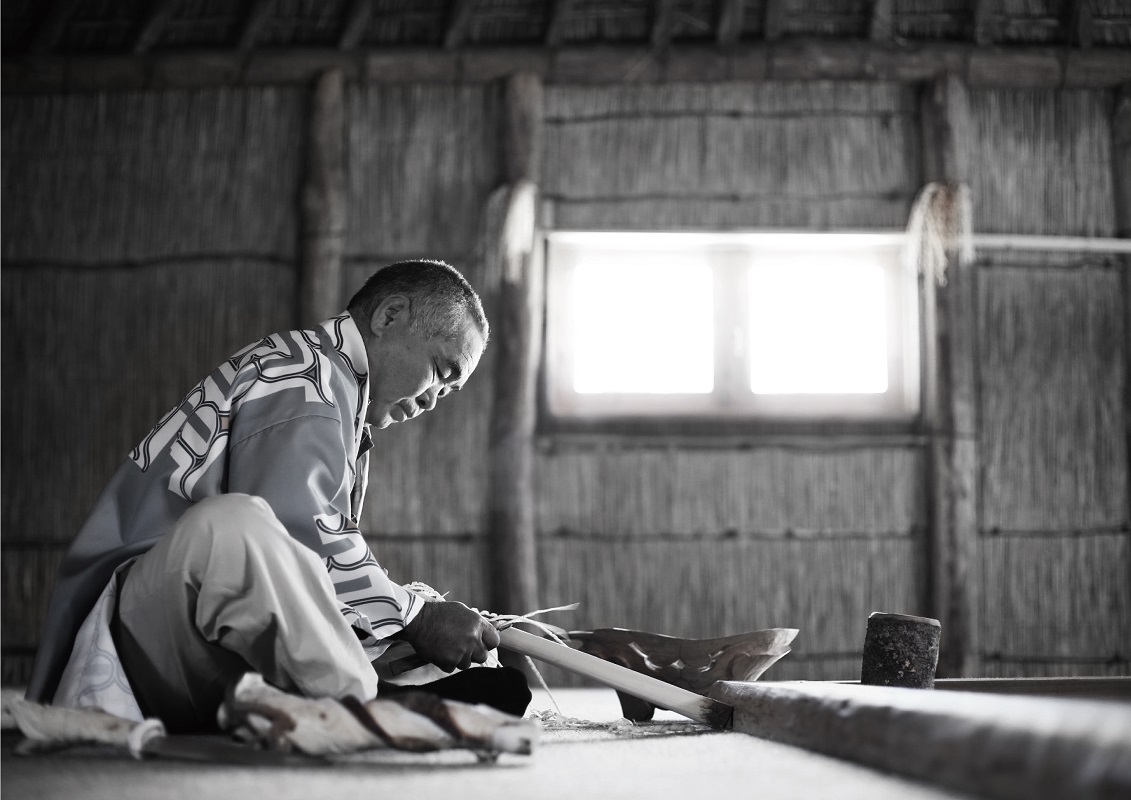 The annexation of Hokkaido started an assimilatory policy and Ainu hunting and fishing where prohibited and Japanese style agriculture promoted, some of the traditional Ainu culture—such as tattooing the hands and the lips of Ainu women and earrings of Ainu men—was forbidden by law and Ainu children were to go to school to learn Japanese language and culture. The Japanese assimilation policy continued for about a hundred year until in 1997 the old legislation was replaced with Ainu culture promotion law. Since then, the Japanese government has slowly started to recognize and support Ainu cultural revitalization, for example updating the law about Ainu to admit Ainu as the indigenous people of Hokkaido in 2019 and opening in 2020 Upopoy, an Ainu culture park that also has the first Japanese national museum concentrating on the history and culture of the Ainu only. 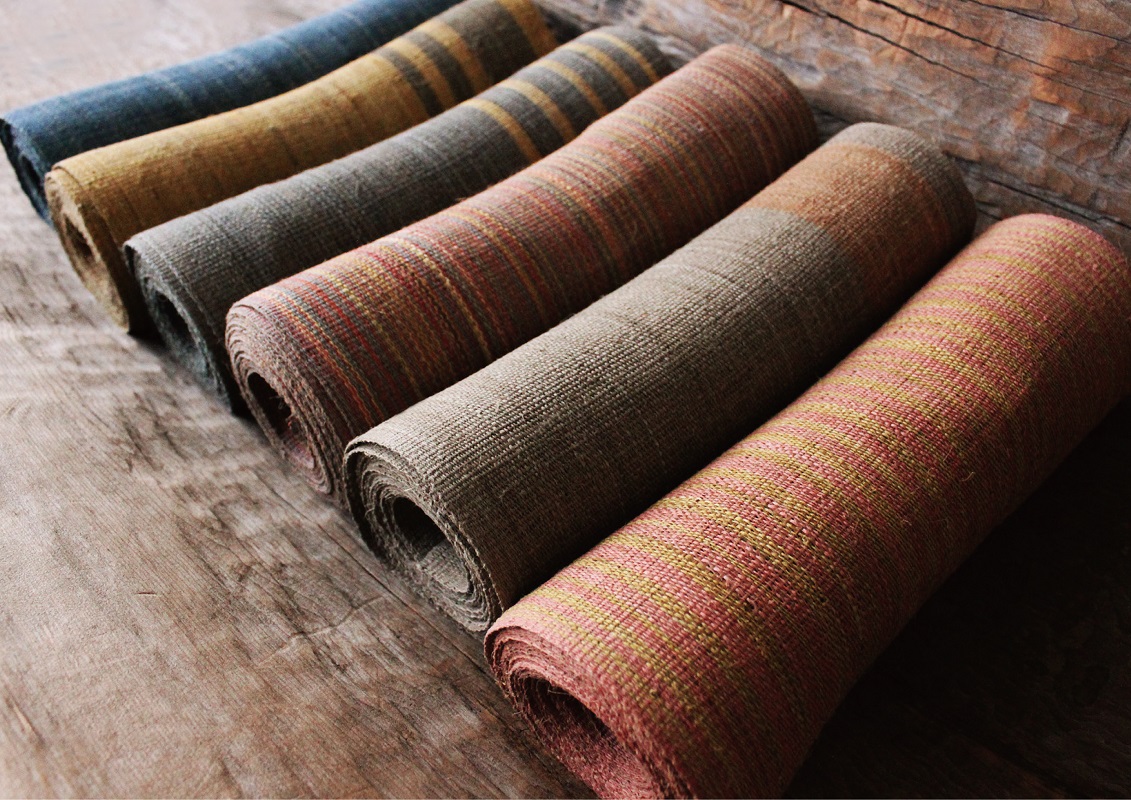 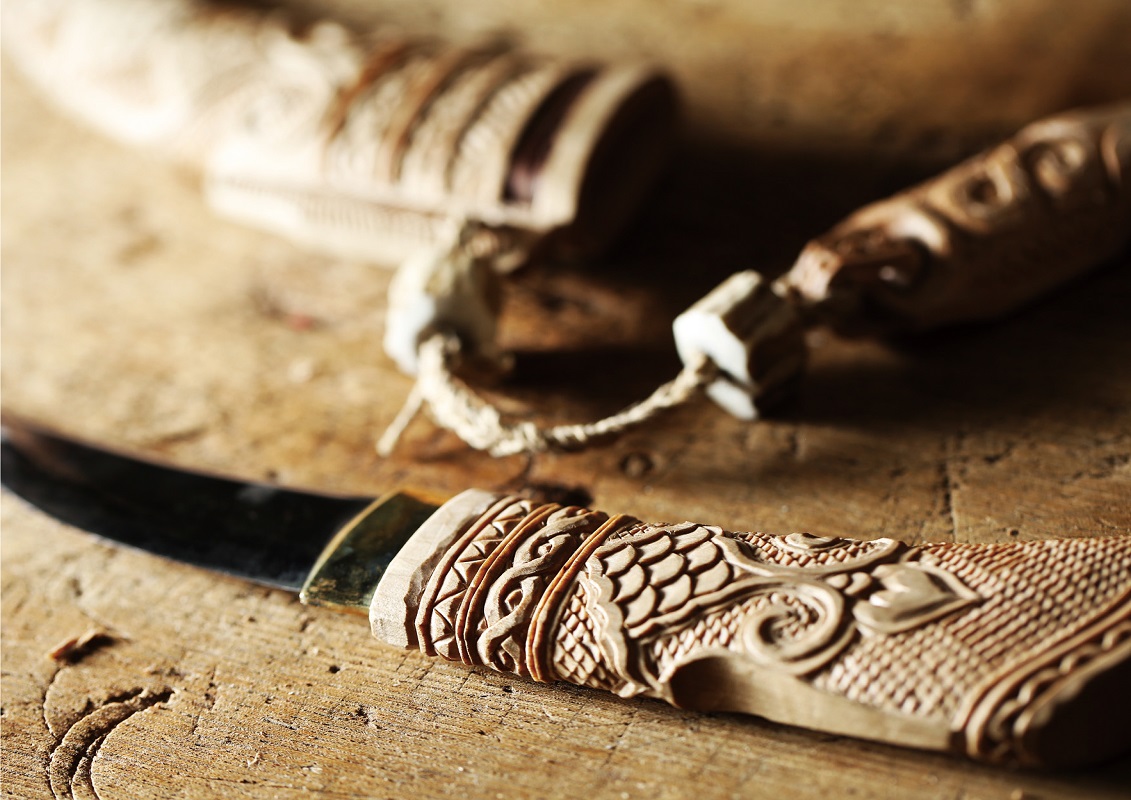 The Hidaka area has the highest percentage of Ainu inhabitants in Japan. According to a government survey, about 38% of the people living in the area identify themselves as Ainu. However, the survey was not sent to all the households, only the ones that were thought of having Ainu roots, so the actual Ainu population rate is probably even higher. There are also certain towns and villages within the Hidaka area, where especially many Ainu are living. One of those places is Biratori town with the majority of the inhabitants being Ainu, and within Biratori in particular the village of Nibutani, where Ainu inhabitants form a great majority by over 80%.

If you are interested in to learn more about the Ainu, take a look at our earlier blog columns Shiraoi: The town of the Ainu and Akan-Mashu National Park: Hot springs and caldera lakes, too.

The untamed nature of Hidaka

Most of the land area of Hidaka is mountainous, with the foot of the mountains covered with lush forests and the peaks with snow. The majestic Hidaka mountain range stretches 150 kilometers (93 miles) from south to north from the tip of the Cape Erimo to Karikachi pass in the middle of Hokkaido. There are several rivers flowing down the Hidaka mountains’ high peaks to the Pacific Ocean. The settlement is concentrated on the lowland river valleys and each of the towns in Hidaka has at least one river flowing by or through the town. Some of the famous rivers in Hidaka area are Saru river, Hidakamonbetsu river, Atsubetsu river, Niikappu river, Shizunai river, Mitsuishi river, Motoura river, Hidakahorobetsu river, Samani river, Horoman river, and Utabetsu river. What comes to the climate in Hidaka area, the summers are cooler than in the western side of Hokkaido and the snowfall in the winter is also smaller than the areas by the Sea of Japan. 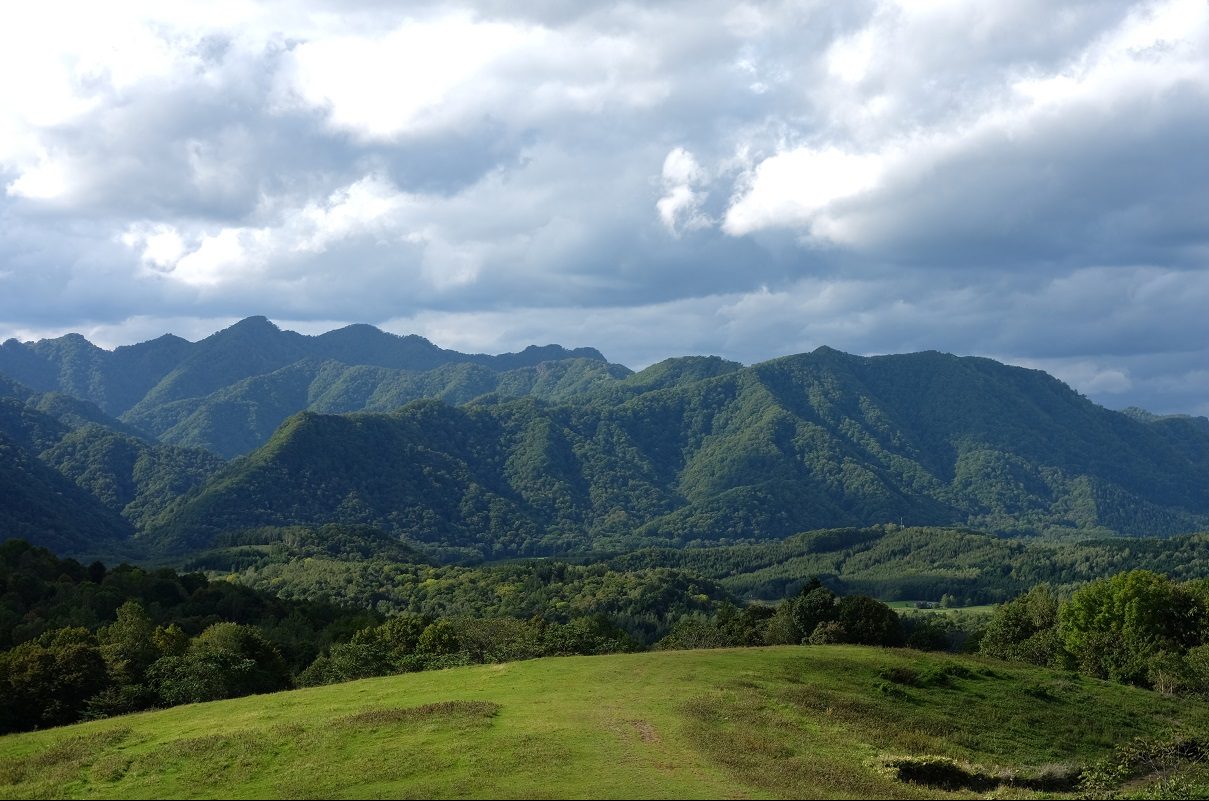 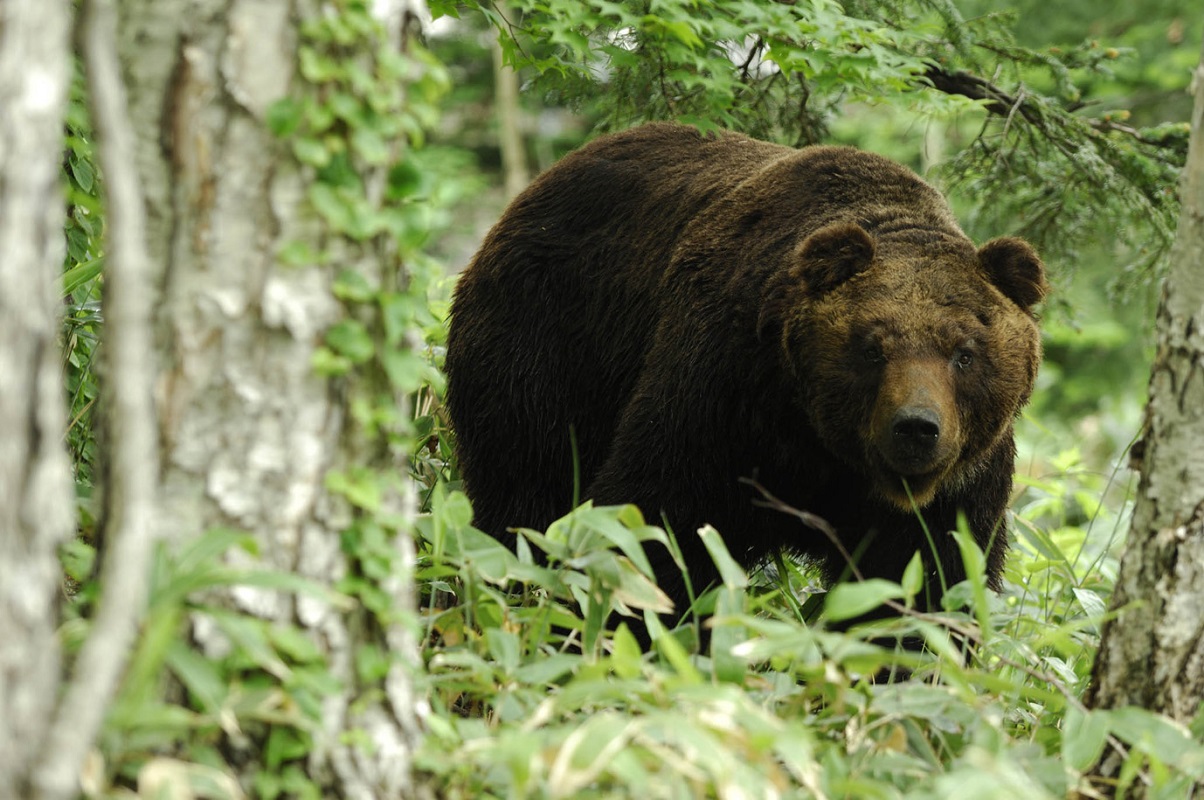 There haven been many initiatives to raise awareness about the significance of the local nature in Hidaka. Mount Apoi close to Samani town has been designated as a UNESCO global geopark (an outbound link) since 2015. To protect the nature of the area, Hidaka-sanmyaku Erimo Quasi-National Park was founded in 1981. The area of the quasi-national park covers Cape Erimo in the south and most of the Hidaka mountain range stretching to north from the cape. There are plans to raise the status of the quasi-national park to that of a national park. The national park project was planned to be completed by the end of 2021 but now it seems that it might take as long as by the end of 2022 to get all the preparations done.

If you want to read more about national parks in Hokkaido, head to our earlier blog columns Akan-Mashu National Park: Hot springs and caldera lakes, Toya: An adventure among volcanoes, Daisetsuzan national park: Playground of the Gods and Rishiri & Rebun: The islands of alpine flowers.

In the summer, we of course recommend hiking in the Hidaka mountains. For a relatively easy climb, climbing Mt. Apoi (810 m/2,658 ft) in Samani gives you an amazing opportunity to enjoy fresh ocean air, breathtaking view to the Pacific Ocean and the unique alpine plantation of the Mt. Apoi at once. If you need something more challenging, you can try to hike Mt. Porosiri (2,053m/6,736 ft) or Mt. Tottabetsu (1,959 m /6,427 ft) instead. 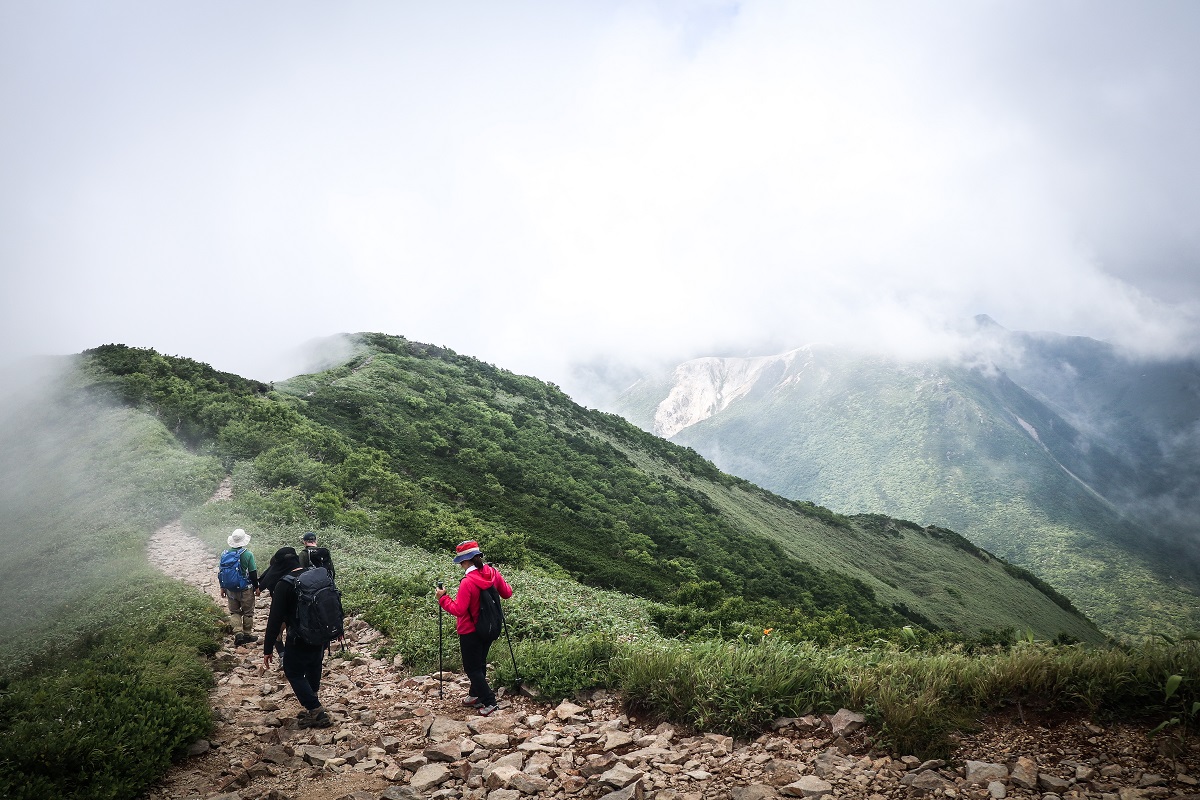 If hiking sounds too tough, we can also offer you walking tours. For example walking tours on the slopes of Mount Apoi and Mt. Apoi geopark in Samani takes you to Cape Enrumu and other interesting places in Samani town.

For birdwatchers, Hidaka offers interesting opportunities. For example, in Urakawa, you can take our Steller’s Sea Eagle and White-tailed Sea Eagle watching tour. The tour takes place in early morning when the birds are the most active. For animal lovers, we recommend  a visit to a horse farm at Hidaka town or Urakawa town. You can try horseback riding and grooming the horses. Another unforgettable experience is to visit a cow farm at Cape Erimo in Erimo town, where you can not only interact with the cows but also have a glimpse of some wild Ezo shika deer or enjoy viewing the night sky full of stars. 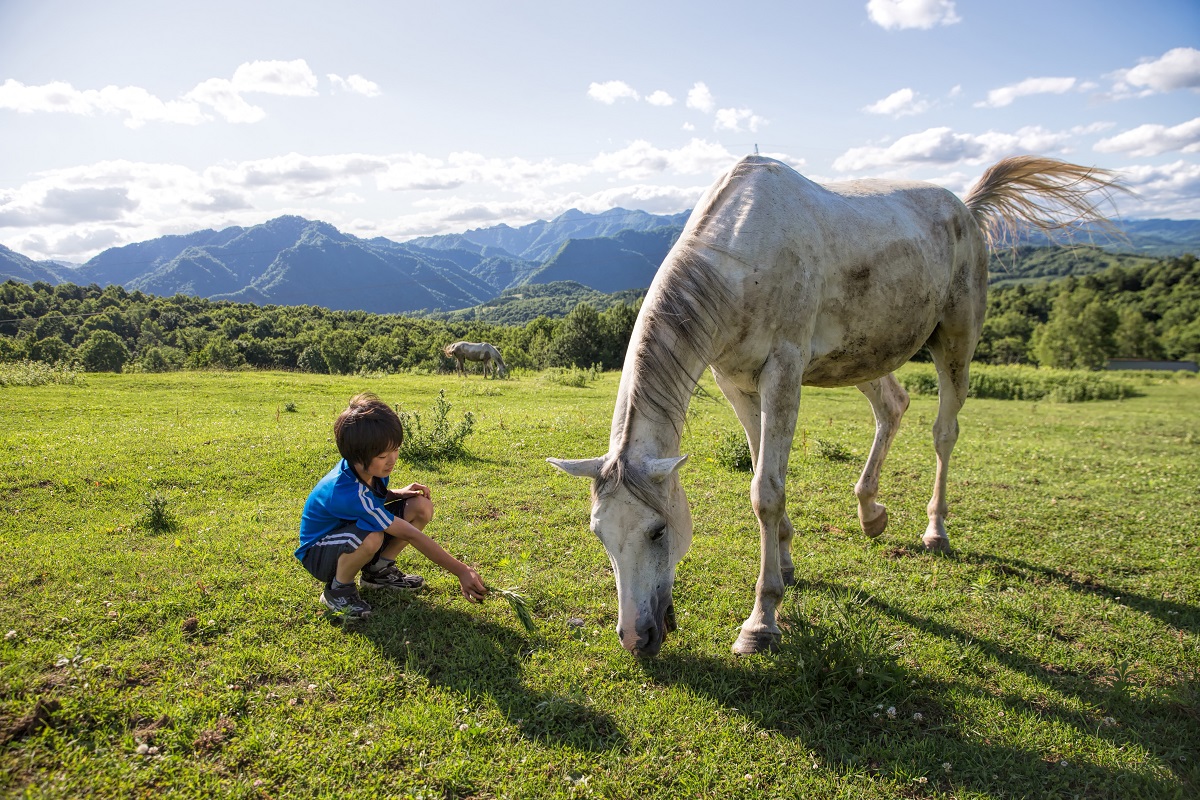 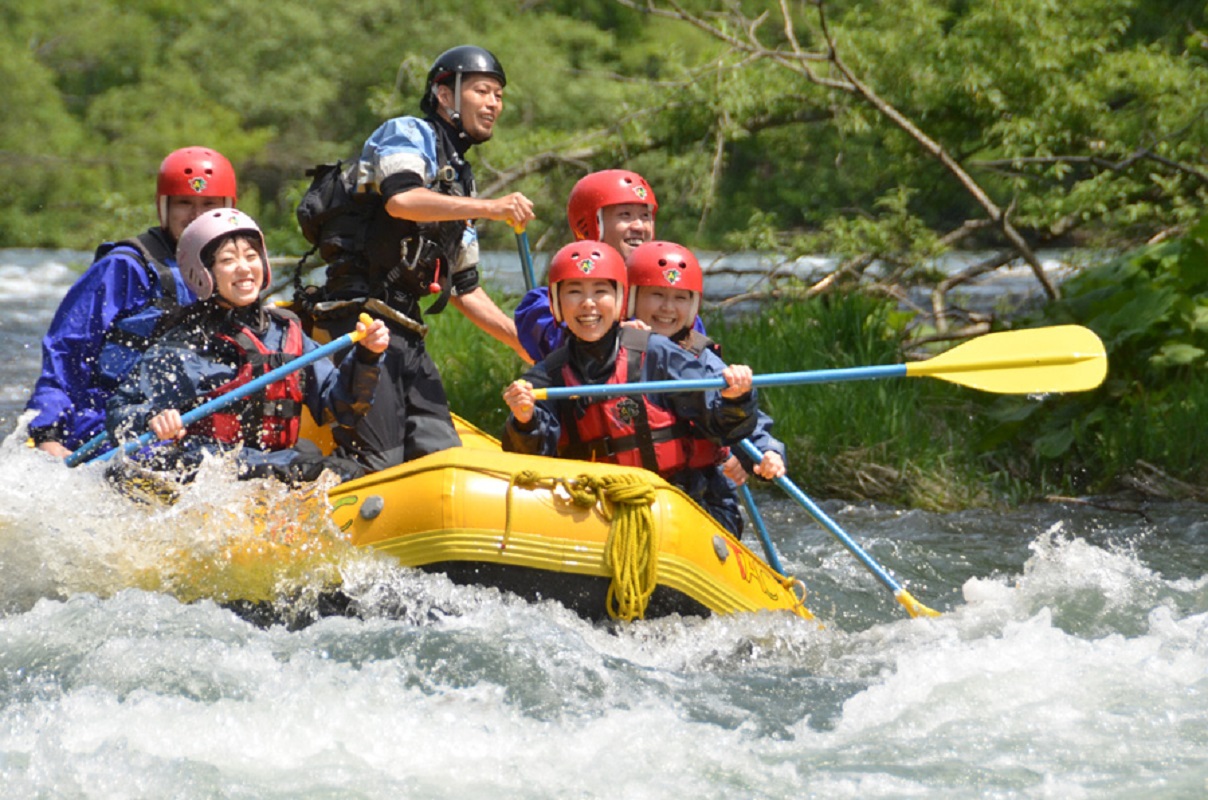 If you don’t mind getting wet, you might want to try out canoeing or kayaking, or if you are in a wild mood, rafting. There are several rivers flowing through the Hidaka area and each of the towns has at least one river. You can get yourself wet rafting at Saru River or at Mukawa river, which is said to be the most turbulent river in Hokkaido, or canoeing at the rivers at the foot of Hidaka mountains.

If you feel that Hidaka deserves to be your next dream travel destination, let us know in the inquiry form!