Toya: An adventure among volcanoes

Surrounded by Shikotsu–Toya national park, Toya is located in the south-western part of Hokkaido—the northernmost island of Japan—only two hours away from Sapporo, the capital city of Hokkaido, and about one and half hours from New Chitose airport.

The area is famous for its volcanic activity, and it has been designated as UNESCO Global Geopark in 2015. Mt. Usu peaking at 733 meters is the highest active volcano in the area and it indeed is very active: it has erupted four times since 1900. The beautiful lake Toya next to Mt. Usu is a volcanic caldera lake that was formed due to an extremely large eruption about 110,000 years ago. Mt. Showa Shinzan is a newcomer and emerged between 1943 and 1945 next to Mt. Usu.

This column introduces some of the activities and adventures to enjoy during your private tour in this enchanting area shaped by volcanic activity around Lake Toya in Hokkaido, Japan. Toya is only about hours away from Sapporo, so it’s easy to take a day trip to this enchanting place. 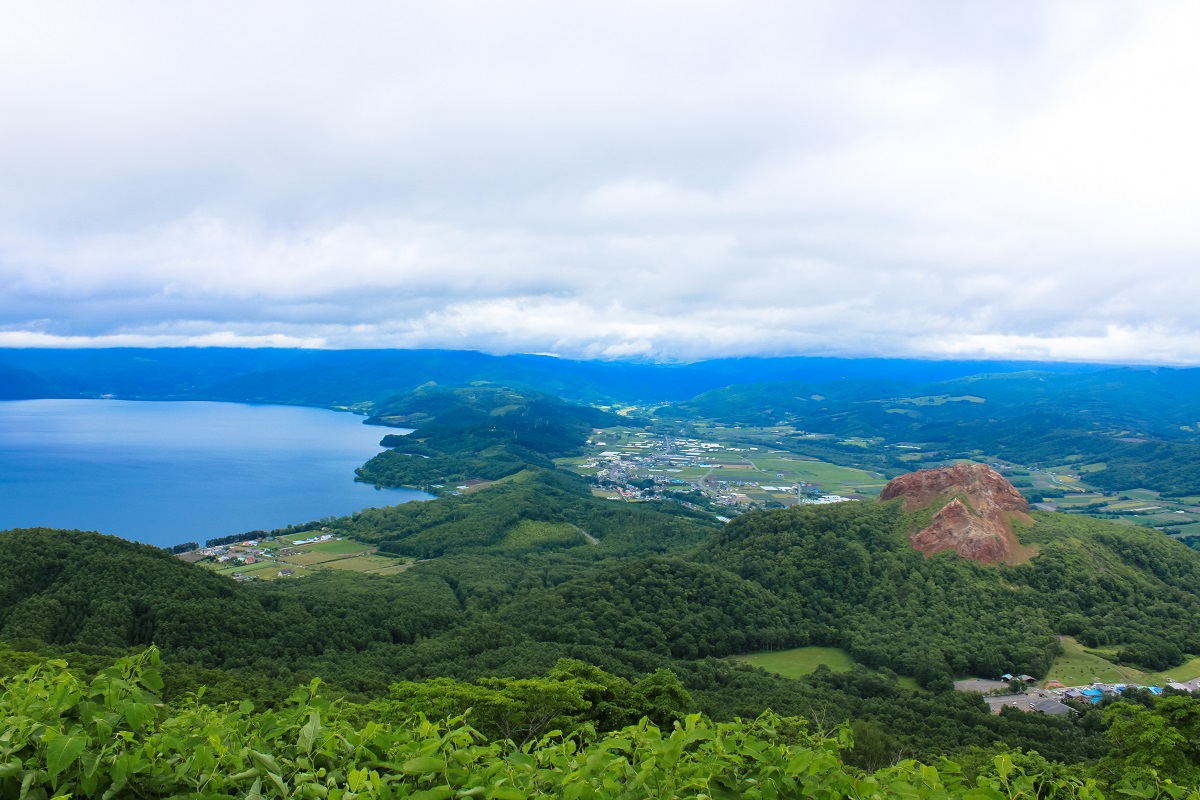 National parks in Japan aim to protect natural sites that are somehow representative of Japanese nature. Shikotsu–Toya National Park was founded because there are many different kinds of phenomena due to the volcanic activity in all the parts of the park: active and inactive volcanoes, caldera lakes, a variety of hot springs, and mud pools, as well as gases fuming out from fumaroles. Apart from the occasional fuming “hell holes”, the area is covered with lush and rich forests as well as towns and farmlands. Also, the wildlife in Toya is abundant and numerous animals are living in the national park, such as Ezo red fox and Ezo deer.

If you want to read about other national parks in Hokkaido, take a look at our blog column about Akan-Mashu National Park and the itinerary about Four National Parks and Wildlife in Late Spring East Hokkaido to get more inspiration on which destinations to include in your private tour. 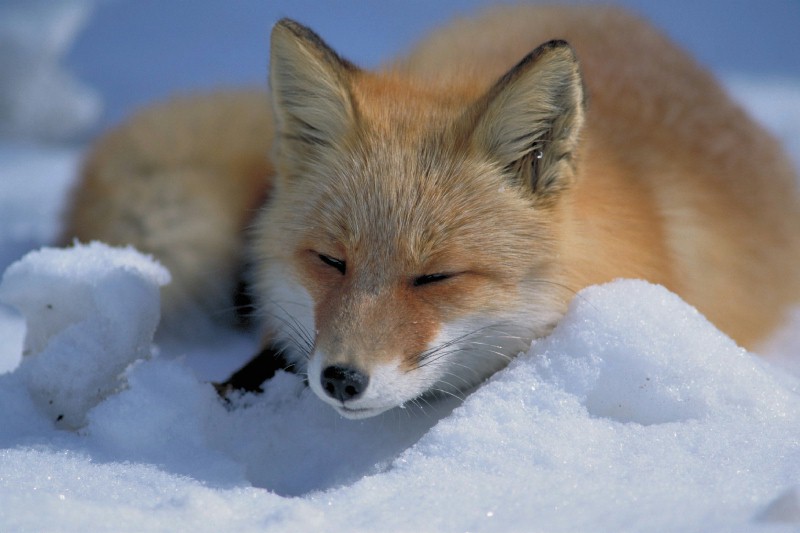 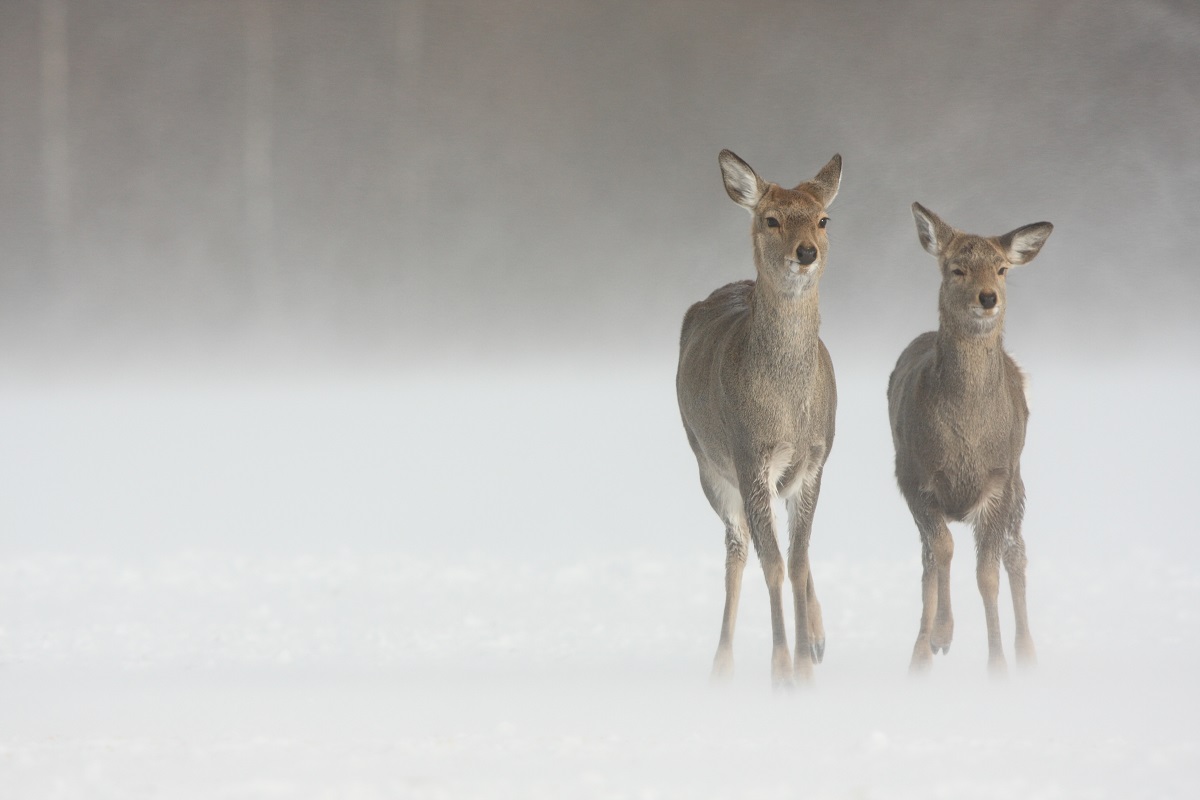 Toya-Usu UNESCO Global Geopark (an outbound link) founded in 2015 is a geopark spreading around Lake Toya. Geoparks are places and regions with geological features that are special and unique in some way. The purpose of geoparks is to protect the geological heritage of the sites, to offer the visitors a possibility to learn about the special features of the site and “the changing world of our Mother Earth” as well as promote sustainable development of the site by encouraging geotourism and developing the local livelihood. In the case of Toya-Usu Geopark the special feature is of course the volcanic activity, the phenomena related to that, and how the surrounding nature changes and adapts to the volcanic activity. 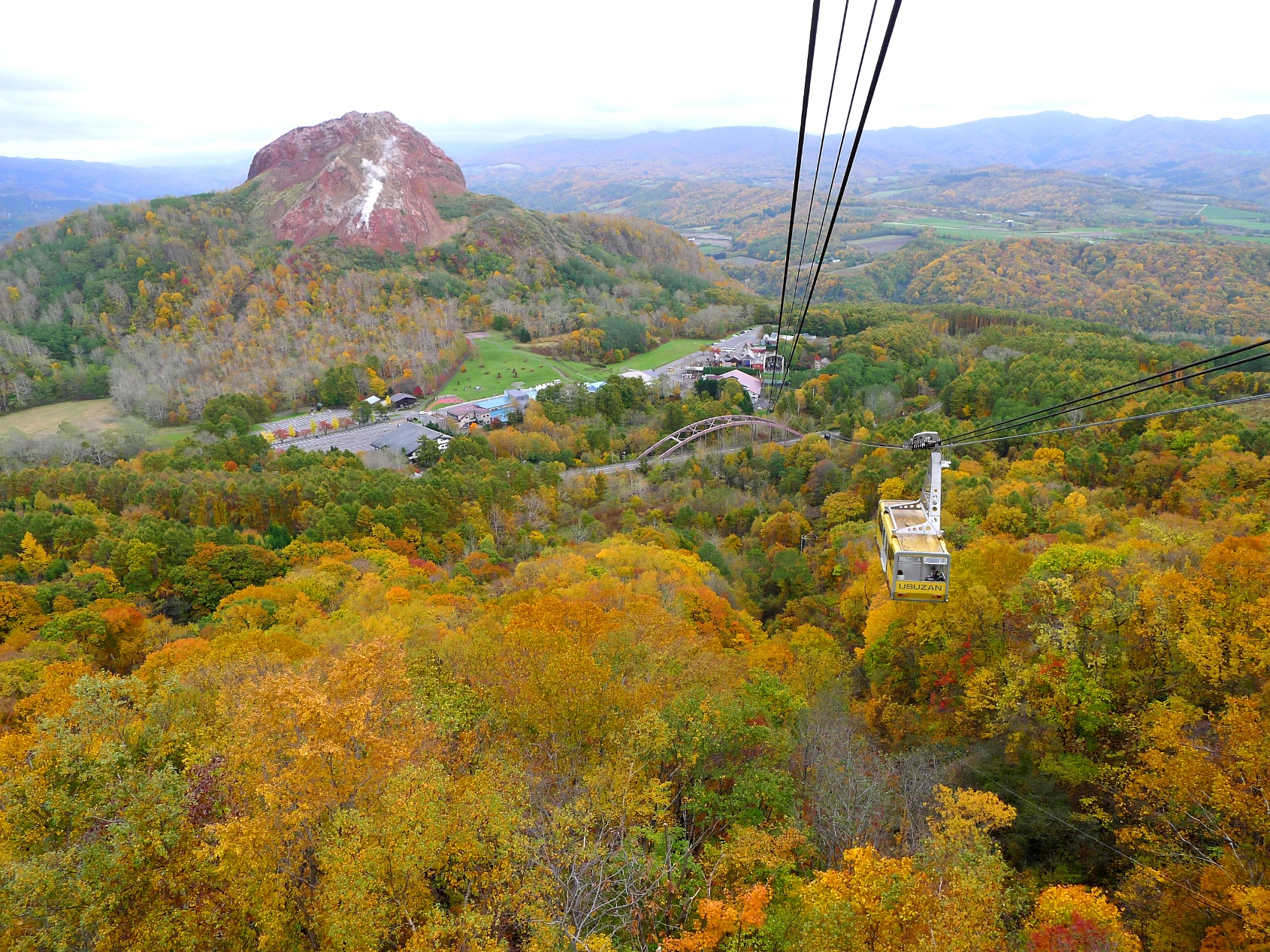 Mt. Usu (Usu-zan in Japanese) is a stratovolcano with a height of 733 meters located between Lake Toya and Uchiura bay opening to the Pacific Ocean. Mt. Usu appeared about 20,000 years ago and it is an active volcano that erupts at intervals of about 50 years, in total nine times since 1663. However, since the beginning of the 20th century, the interval of eruptions has been even shorter, with eruptions in 1910, 1943–1945, 1977–1978, and 2000. This makes Mt. Usu one of the most active volcanoes in Japan. The volcano is famous for creating lava domes when erupting, which is a quite rare phenomenon both in Japan and the whole world.

Mt. Showa-Shinzan started to emerge next to Mt. Usu in 1943, hence the name ‘new mountain of Showa era’ (Showa era spans from 1926 to 1989 in Japanese calendar based on the reign of the emperors). The volcano was formed to its current height of about 400 meters in mere two years. You can still see the smoke and fumes coming out of the cracks on the mountain. Showa-Shinzan is a lava dome, which is a relatively rare type of volcano, so it has also value as a research target as well.

Lake Toya is a beautiful round caldera lake next to Mt. Usu. While the lake was formed about 110,000 years ago, the dome islands in the middle of the lake were formed later, somewhere between 20,000 and 10,000 years ago. The island group is called Nakajima, ‘the Middle Islands.’ Since the lake is almost round and the islands are in the middle of the lake, from the bird’s view, Lake Toya looks like a giant doughnut and it’s easy to spot on the map.

The name of the lake, ‘Toya’, is not a Japanese name but comes from the language of Ainu—the indigenous people of Japan and Russia—and means ‘lakeshore’. Ainu themselves called the lake aptly ‘Kim un to’, ‘lake in the mountains’. Read more about Ainu and how to get to know their culture in our blog column Shiraoi: The town of the Ainu. 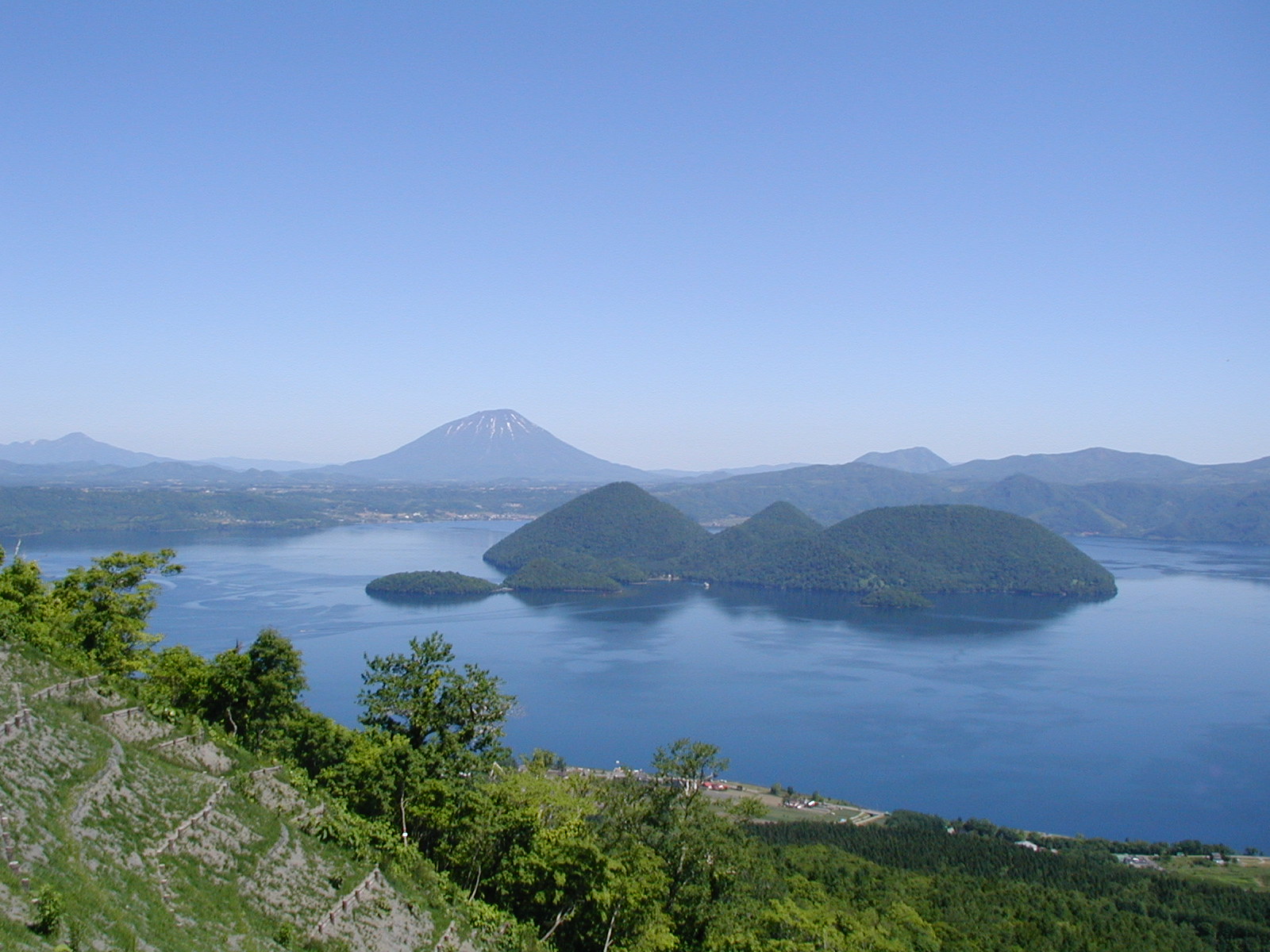 Explore the wonders of volcanoes

There are several exciting activities to do in the national park and the geopark in Toya. Be sure to visit Mt. Usu ropeway (an outbound link) and Showa Shinzan lava dome. Take the ropeway up the volcano to admire the breathtaking view over Lake Toya and peek into some of the craters. You can also go by foot and climb halfway up the volcano (an outbound link) to see the view on the Uchiura bay side and the Pacific Ocean. Contact us so that we can plan together a private tour with a local guide around Mt. Usu and the geopark.

The eruptions do, of course, affect people living around the area. The latest eruptions of Mt. Usu destroyed several facilities and buildings. The ruins of the damaged buildings are preserved so that visitors can go and see what the power of a volcanic eruption can do (an outbound link). The latest eruption in 2000 created several new craters and damaged a public bathhouse. Konpira craters are no longer active, and they have turned into caldera lakes but craters at the foot of Mt. Nishiyama are still active and blow out fumes from underground. In the 1977 Volcano Remnants Park, there are several buildings damaged by the 1977 eruption and preserved as a memorial. You can go and hike around the area by marked routes. Please bear in mind that some of the routes might be closed during the winter. 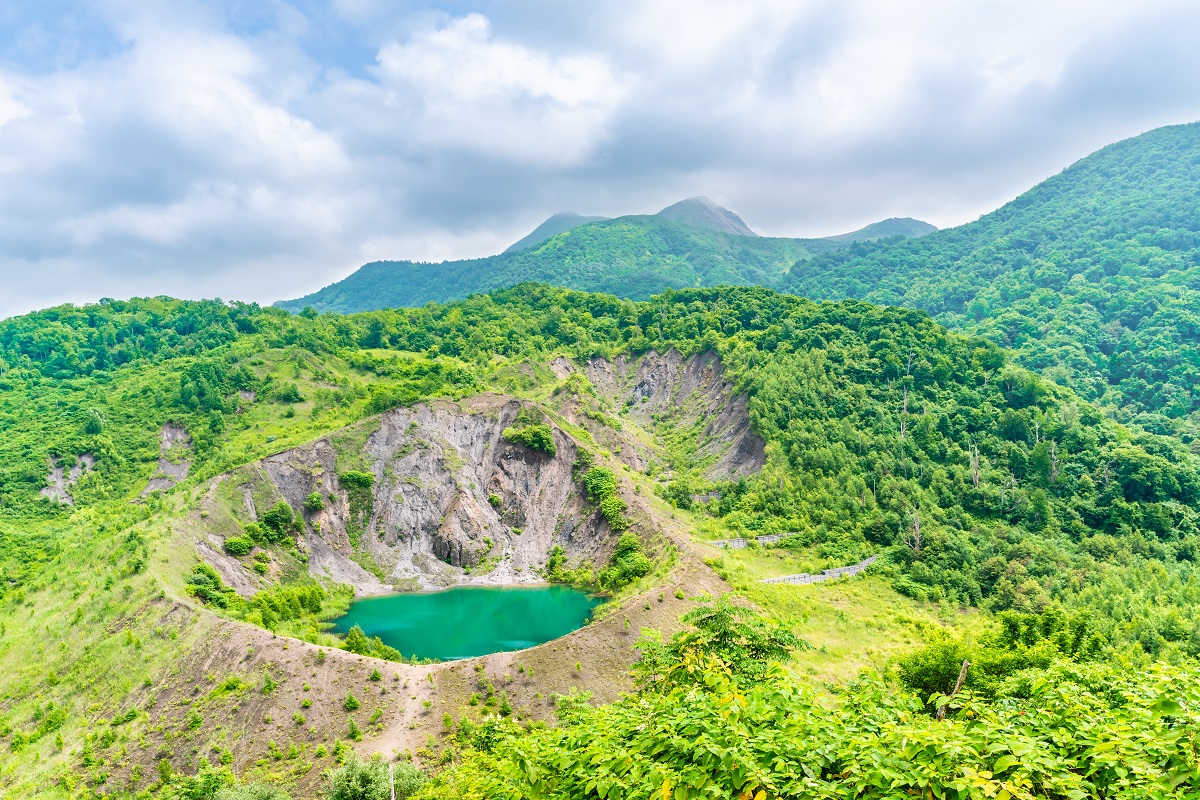 You might wonder why people still live in such a disaster-prone area. The soil around volcanoes tends to be very fertile because of the pumice and volcanic ash and the land around Mt. Usu makes no exception. Besides the fertile farming land, the lake forms a natural basin with a mild sub-climate, so the area is exceptionally well suitable for farming. Archaeologists have found out that there have been people living in the area at least for 10,000 years. Generally speaking, in Japan, there are many frequently occurring natural phenomena—such as earthquakes, volcanic eruptions, floods, tsunamis, and landslides—that can be disastrous for human beings. We cannot prevent them from happening, but we can prepare ourselves and learn how to live with them.

Go for an adventure on and around Lake Toya

If you prefer the lake to the volcanoes, there is also plenty to do at Lake Toya. There is a sightseeing ferry cruise on the lake starting from Toyako onsen hot spring resort and you can also access Oshima—the largest of the Nakajima islands standing in the middle of the lake—with the ferry. On Oshima island, you can visit a small museum about the nature of Nakajima islands and go for a walk in the forest. If you are lucky, you might get a glimpse of some of the wild deer living on the island.

One of the best ways to enjoy the natural beauty of Lake Toya and its surroundings is to take a private cycling tour around the lake. The length of Toya’s shoreline is about 46 kilometers, and the picturesque route follows the shoreline in most of the parts very closely.  This is an amazing way to experience the beauty and fresh air of Hokkaido while riding your bike. 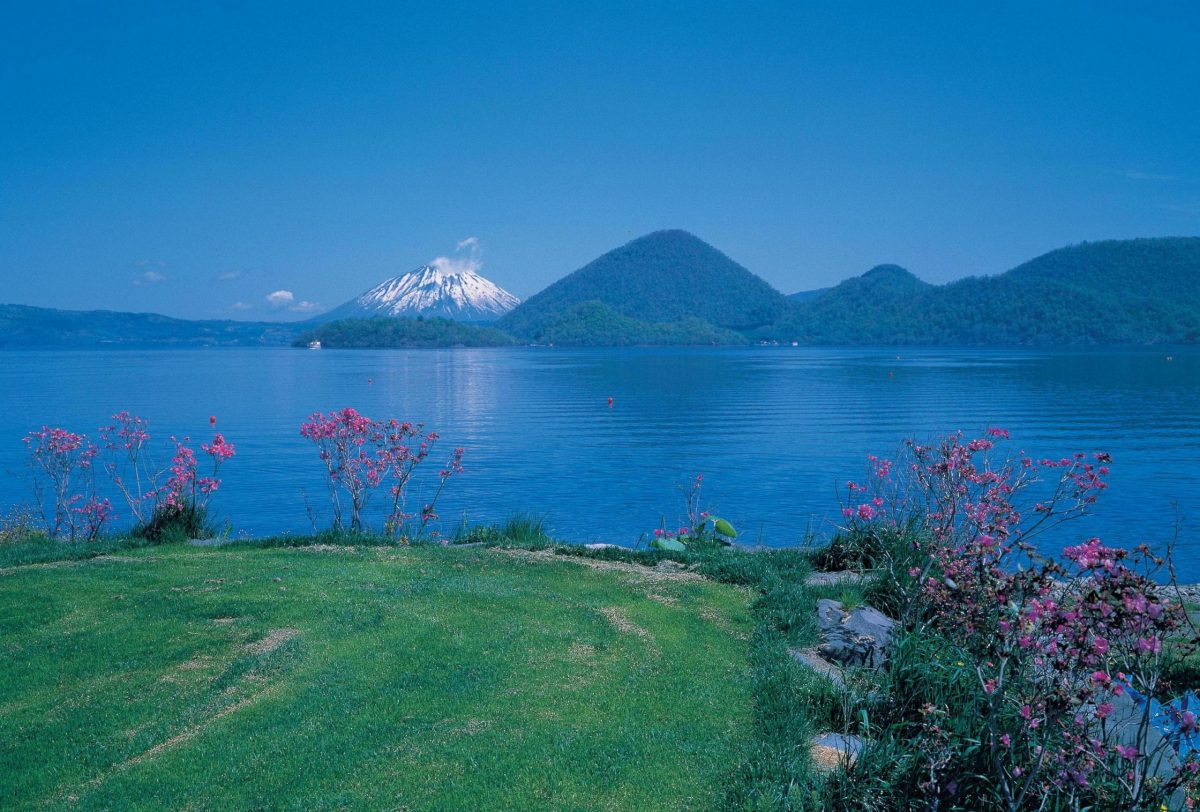 You can enjoy this activity from the end of April up until late November. During the spring you can witness the amazing nature of Hokkaido coming back alive after the winter and might get a glimpse of blooming cherry trees, too. In the summer, the lush greenery of trees around the road will keep you nice and cool from the heat of the sun. If you are eager to view the autumn leaves the best time to go is from mid-October to early November. Whichever you choose, you can enjoy the breathtaking scenery of abundant Hokkaido nature. The choice is yours!

Contact us to add a private cycling tour around Lake Toya to your itinerary.

Feeling tired after all your adventures, what would be a better way to end a busy day than to take a good long soak in an onsen while admiring a breathtaking view over the lake? Volcanic activity means of course that there are also hot springs around and this goes also for Toya. Toyako Onsen hot spring resort town is one of the most popular onsen resorts in Japan. The onsen resort lies at the south side of Lake Toya at the foot of the Mt. Usu and it offers a spectacular view over the lake with Mt. Yotei—also titled the Mount Fuji of Hokkaido—looming on the horizon. The onsen resort was developed starting in the 1950s and setting up such facilities was made possible by Mt. Usu: when the volcano erupted in 1910, it opened a hot spring at the lakeshore. In the resort town, there are several luxury hotels with different types of spas. 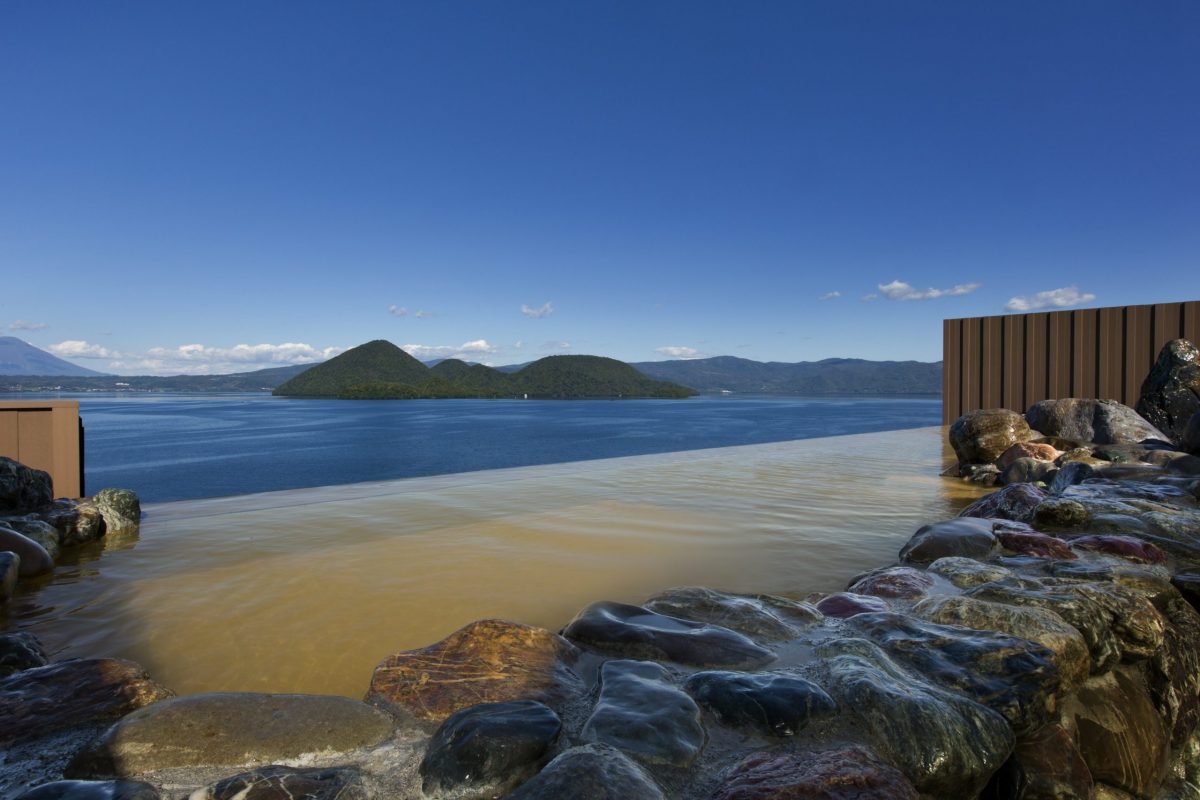 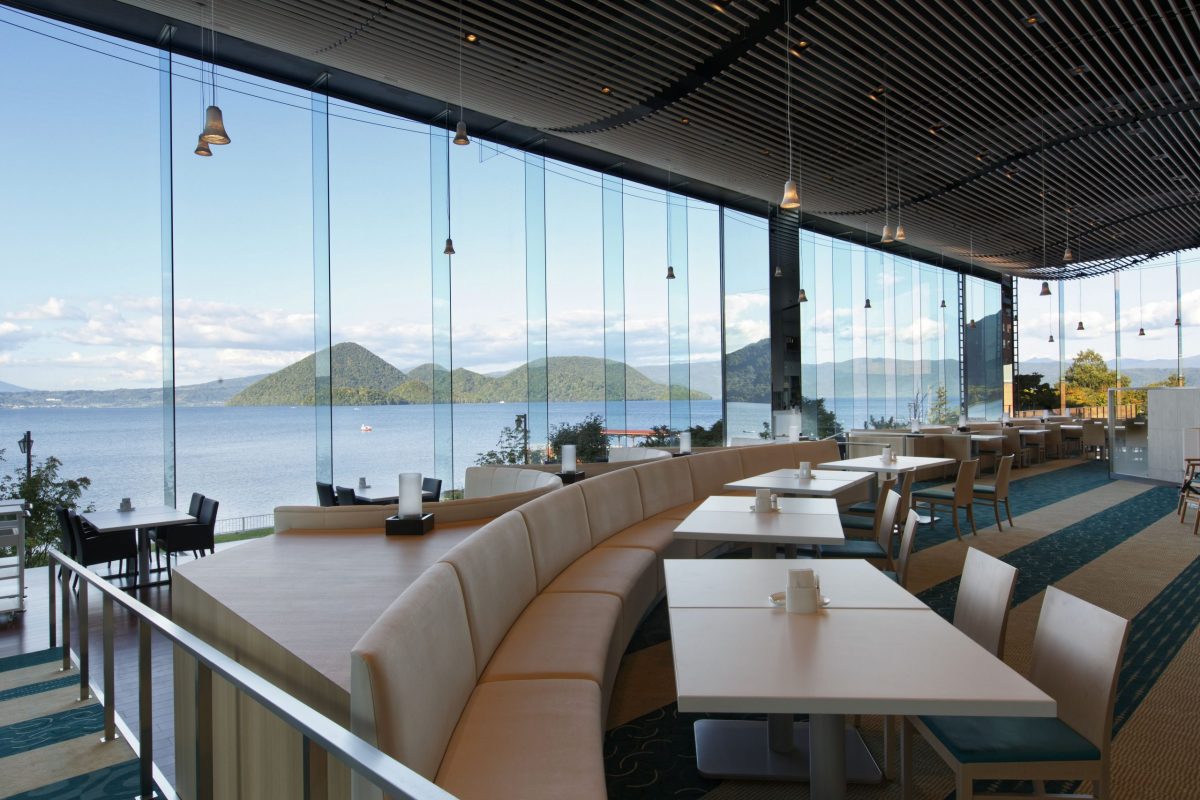 One of the most famed spa hotels in Toyako Onsen hot spring resort is The Lake View Toya Nonokaze Resort (an outbound link). It is known for its minimalist interior design and especially its rooftop onsen bath with an infinity pool. You can feel yourself immersing into the scenery while relaxing in this extraordinary rotenburo (an outdoor pool) with an infinity pool that makes it look as if the onsen and the lake are one. This is also an excellent place to watch the fireworks that are set off every night over Lake Toya. 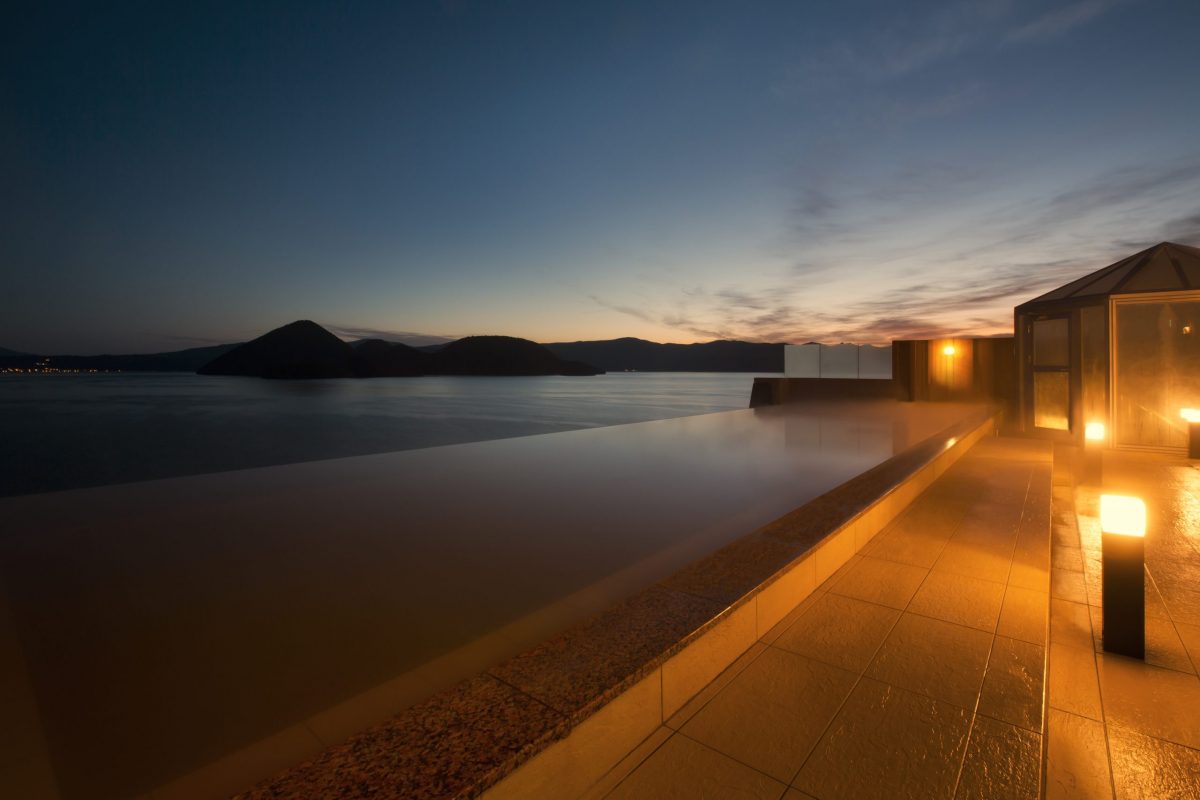 If you think Toya is a must-see place in your next adventure in Hokkaido, feel free to send us a travel inquiry for a private tour or find more inspiration in our blog columns or Hokkaido sample itineraries! 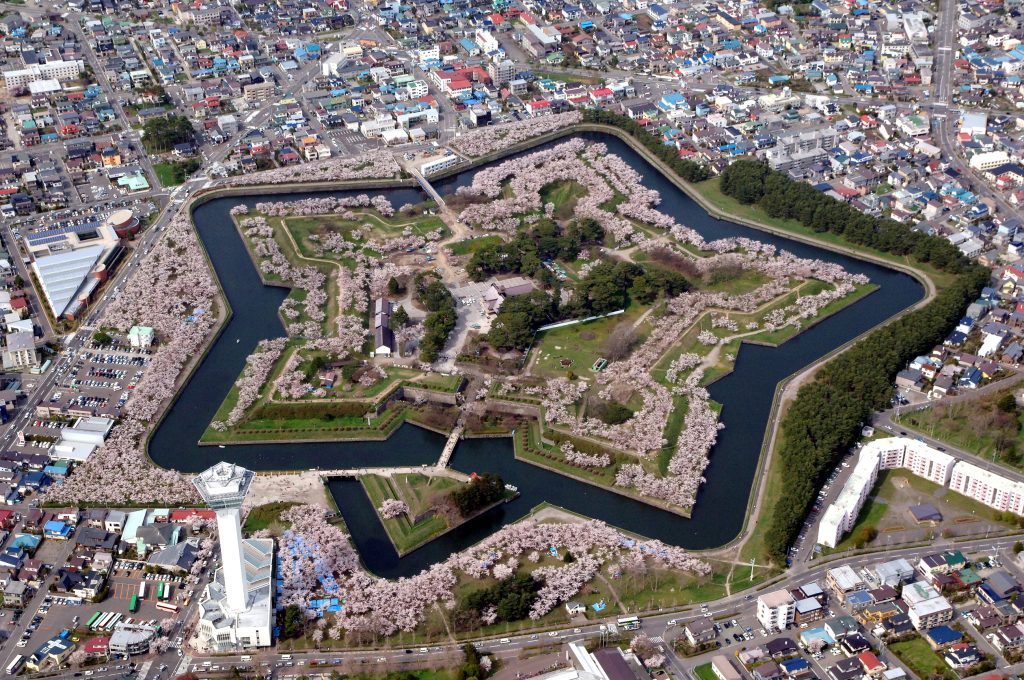 The highly anticipated spring season has arrived in Japan’s Final Frontier! When the “sakura” cherry blossom season in other parts of the country has ended, here the flower viewing peak is just getting started. Spring is also excellent timing for a culinary travel adventure. During this private tour, you will travel in South Hokkaido and experience not only the well-known attractions and classic flower viewing spots, but also the everyday life and special places loved by the locals.

You will be warmly welcomed in small fishing harbors pulsating with life and cozy private kitchens where you can really experience springtime Hokkaido and the authentic, local cuisine up close and personal.