Daisetsuzan national park is located in the middle of Hokkaido―Japan’s northernmost island―and Asahikawa city is one of the most popular entry points to the national park. Asahikawa is the second largest city in Hokkaido after Sapporo and it is known for its brewing and timbering industries.

Both of the industries are enabled by the abundant nature of Daisetsuzan area: the breweries can use the clearest water flowing in the mountain streams and the vast forests that cover the foot of the mountain range have been providing plenty of raw material for Asahikawa’s sawmills. The first sawmill was established in Asahikawa in 1890. However, overharvesting started to become an environmental problem and also demand for timber decreased with the global recession from the late 1920’s, so Daisetsuzan national park was established in 1934 to protect the unique nature of the area.

In this blog post, you can find adventure travel inspiration where and how to explore the northern parts of Daisetsuzan national park (Omote Daisetsuzan area) and learn about the abundant nature of the area.

For more stories about national parks in Hokkaido, take a look at our other blog columns Akan-Mashu National Park: Hot springs and caldera lakes and Toya: An adventure among volcanoes.

The untouched nature of Daisetsuzan 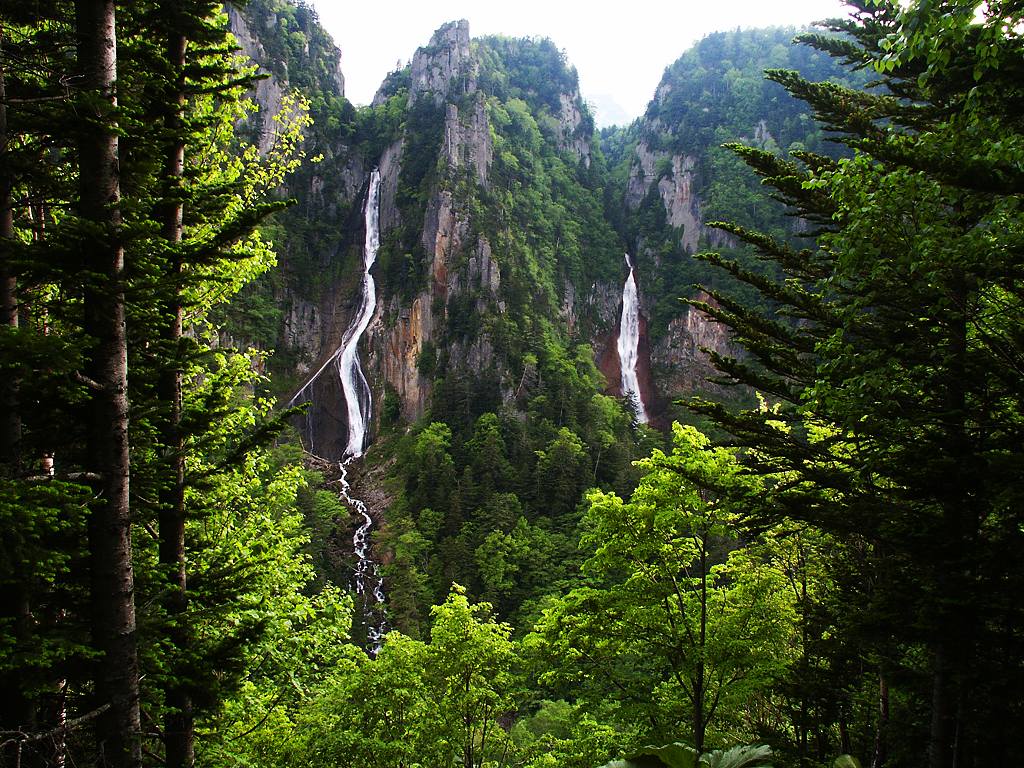 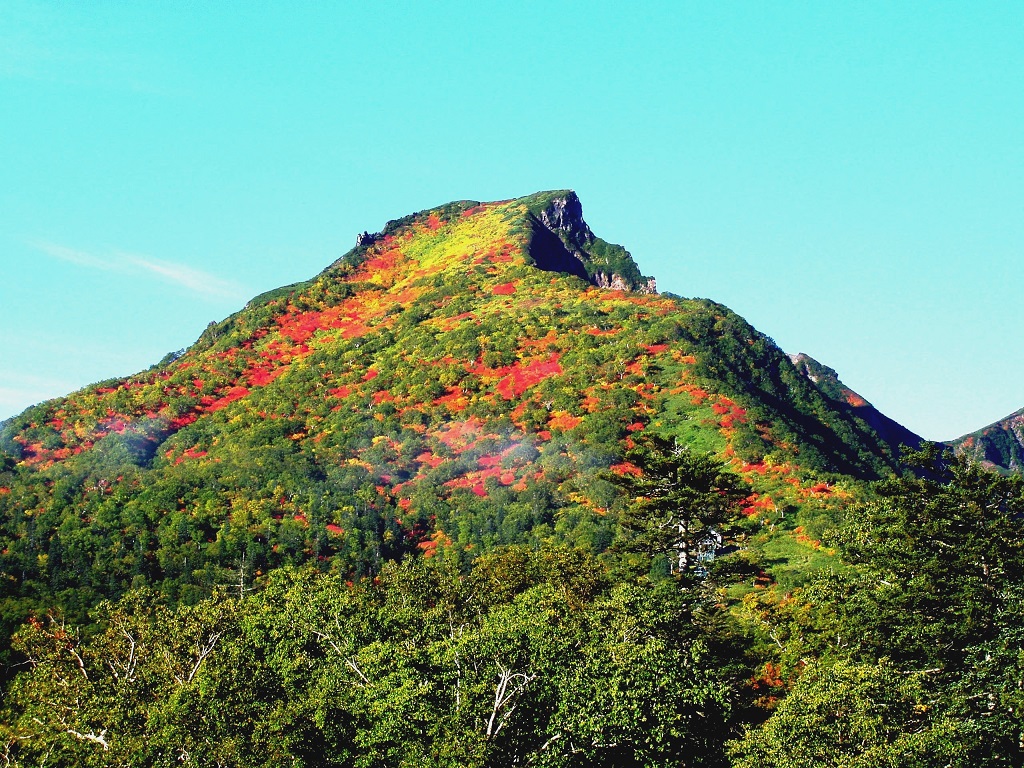 The Daisetsuzan volcanic group is formed on a lava plateau spreading over a wide area on the high altitude. Several volcanoes erupted on the plateau and formed the current mountain range with a number of peaks over 2,000 meter, among them the tallest peak in Hokkaido, Mount Asahidake (an outbound link) towering at 2,291 m (7,510 ft). Other  famous peaks in the area are Mount Hokkaidake (2,149 m), Mount Kurodake (1,984 m), Mount Hakuun (2,230 m), and Mount Akadake (2,078 m). Some of the peaks are still active volcanoes, such as Mount Asahidake. 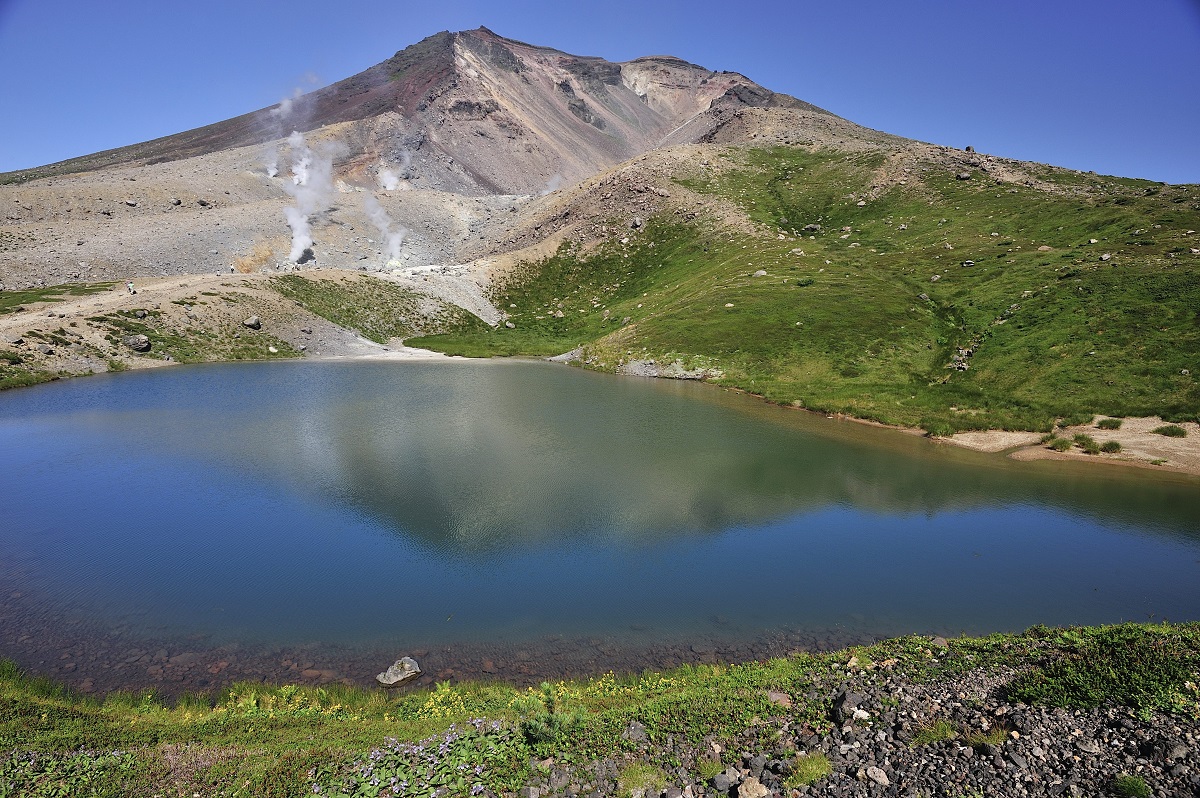 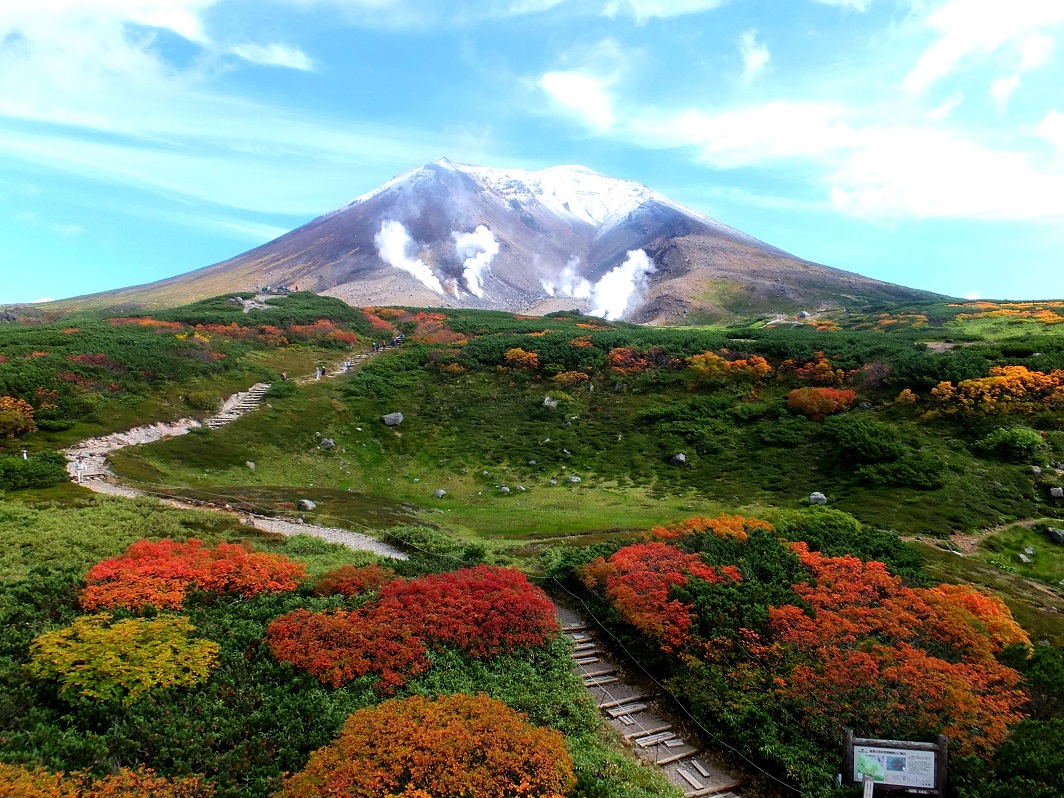 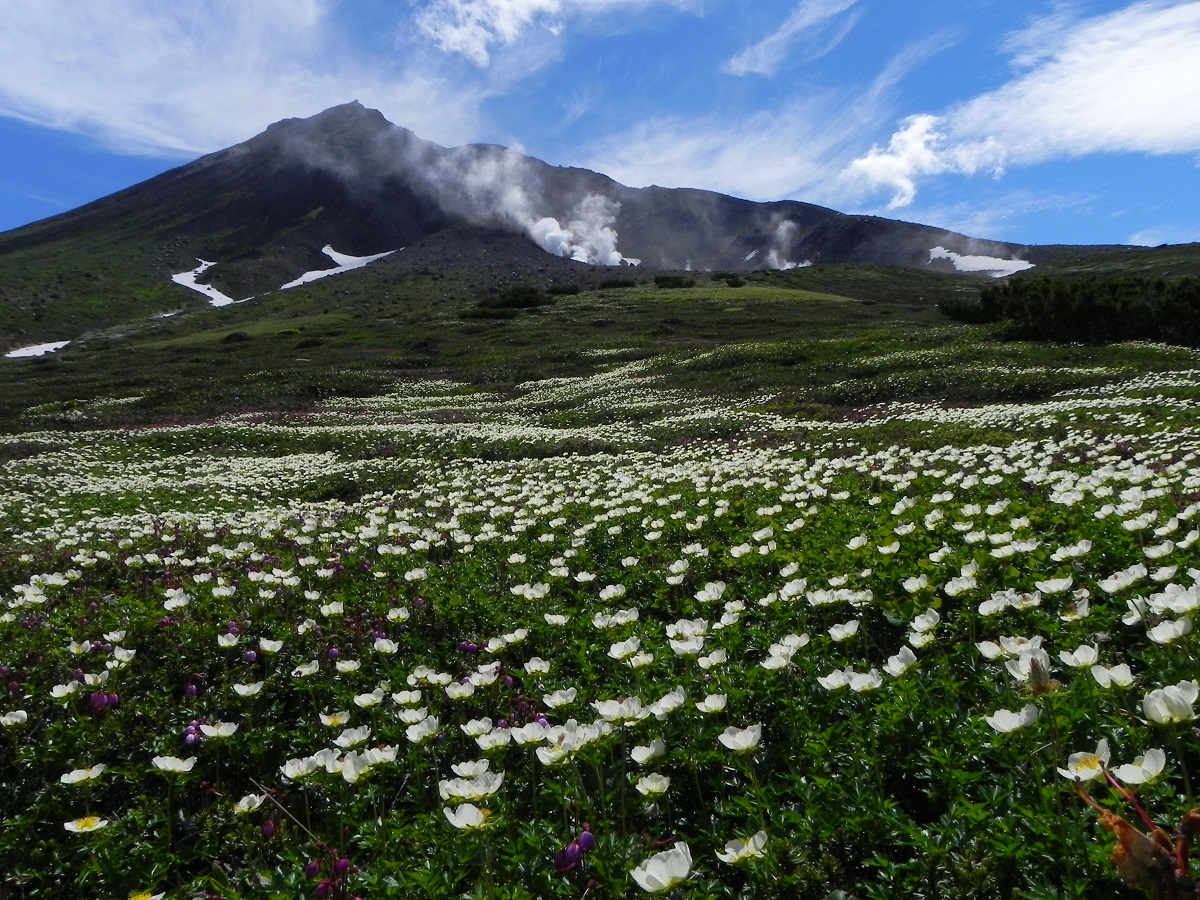 The plantation in Daisetsuzan of course varies the higher you climb: From mixed forest at the lowest reaches of the mountain to evergreen fir tree forests and to alpine plants at the very top. The forests at the upper parts of the foot of the mountain range are mainly subarctic primeval forests of Sakhalin spruce (‘ezomatsu’ in Japanese) and Sakhalin fir (‘todomatsu’ in Japanese). On the plateau between the peaks there you can find alpine ponds and alpine flower meadows. Some of the plants moved to the area from Siberia and the Kuril islands during the Ice Age, but some of the plants and animals can only be found here. For example, the butterfly species Parnassius eversmanni daisetsuzanus can only be found in Daisetsuzan. 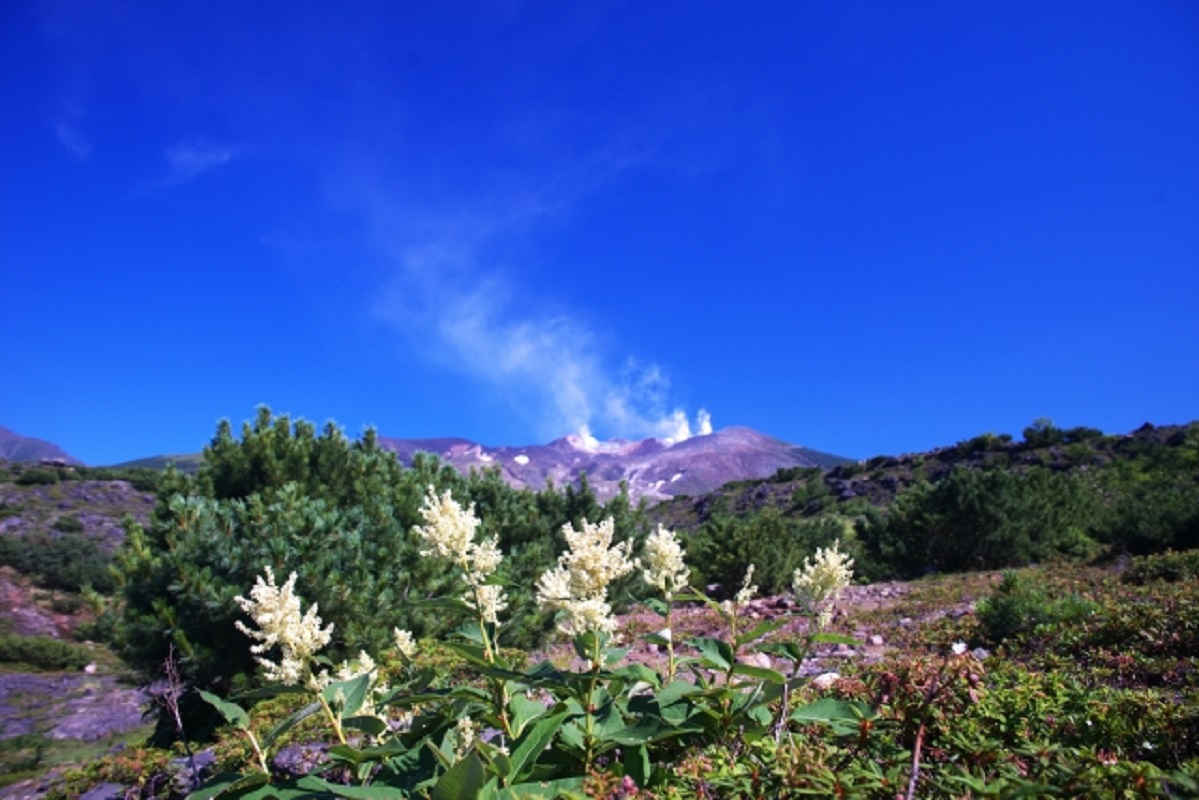 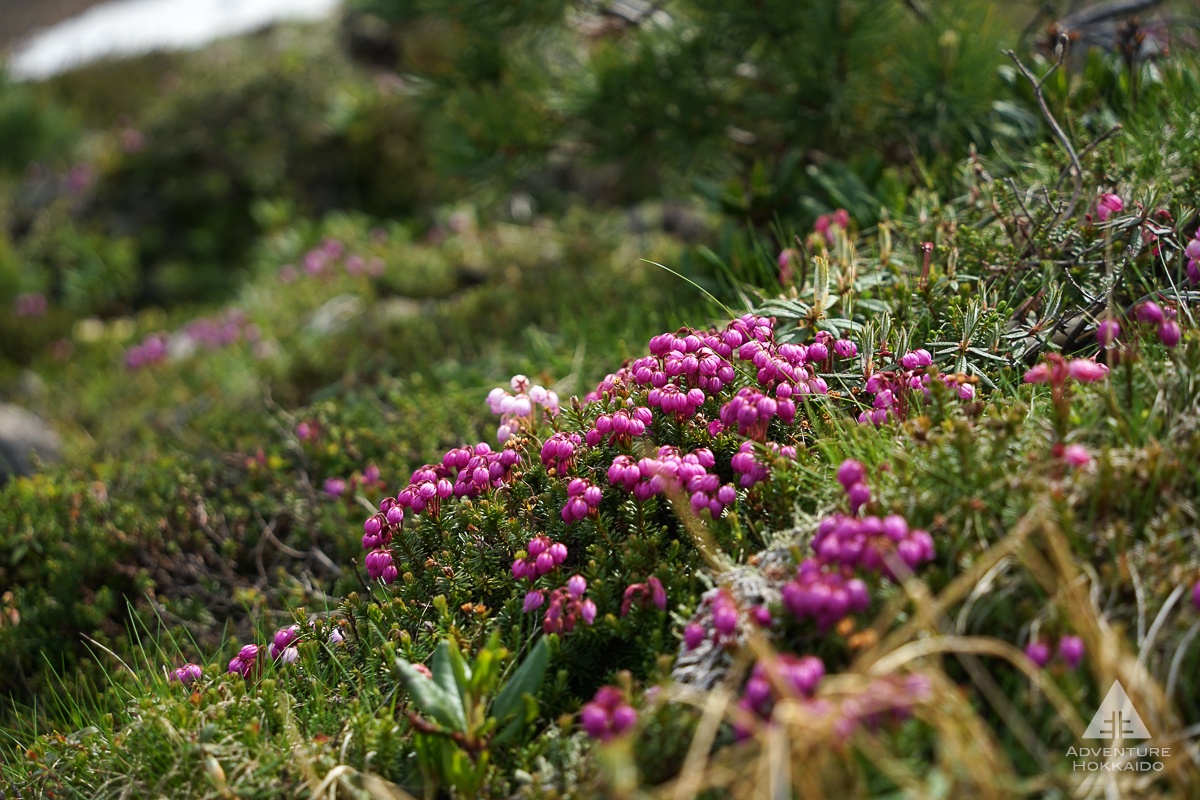 The mountain peaks of Daisetsuzan are not reachable during the long winter due to heavy snowfall. The summer, on the other hand, is extremely short in these high altitudes: summer starts in July and lasts until August. Snow remains in the gorges and fields near the peaks even during the short summer. The best season to admire the park’s stunning autumn leaves is at the end of August and early September. One of the best spots to do this is at Kogen swamp. Sometimes the first snow falls as early as in August, but usually you have to wait until October to get more snow. 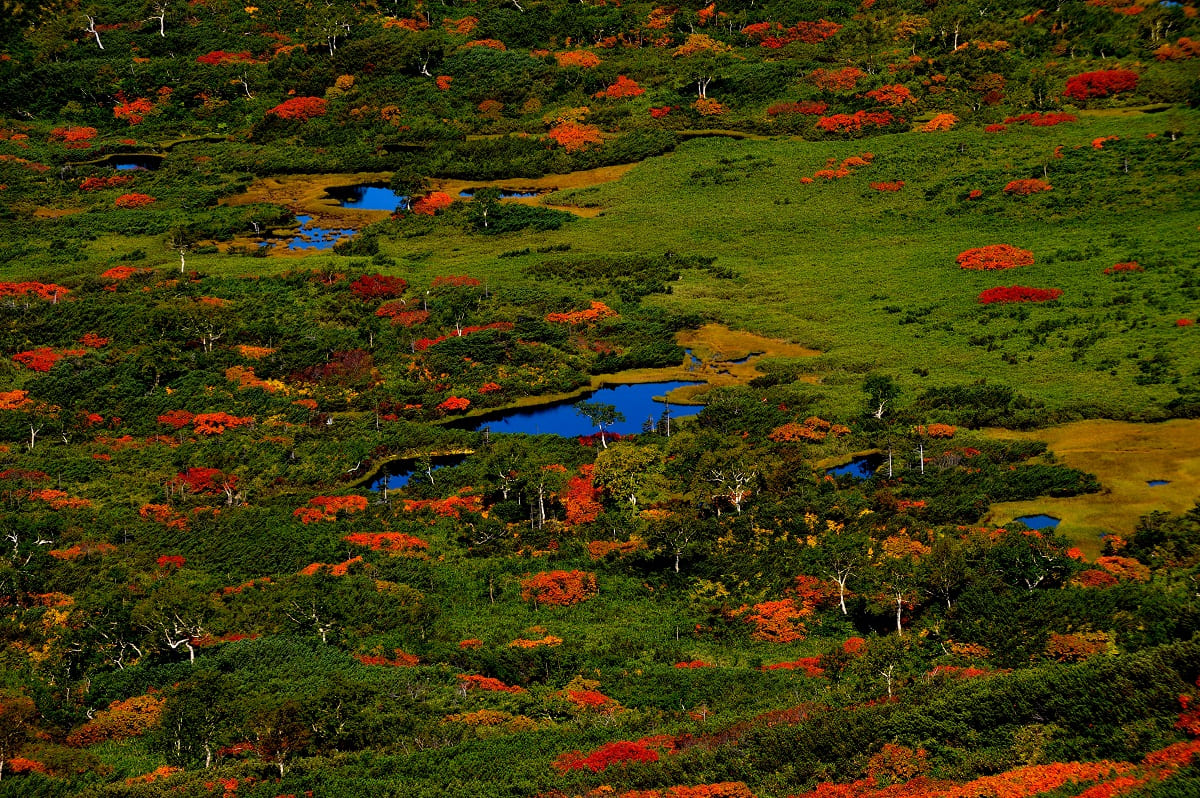 Daisetsuzan national park (an outbound link) was established in December 1934. It is the largest national park in Japan with its area of 2267.64 sq. km (875.54 sq mi), which means its area is larger than that of the whole of Tokyo!

One of the first known travelers at Daisetsuzan was Japanese mountaineer and travel writer Keigetsu Omachi (1869–1925). After traversing between the peaks―and there were no trails at the time―and getting to know the Daisetsuzan area, he aptly stated: “To understand the height of a mountain, climb Mt. Fuji. To understand the vastness of a mountain, climb the Daisetsuzan mountains.” When the nature park was established, trails were built and now there are both short and long courses for hikers of different levels of experience. Ainu, the indigenous people of Hokkaido, the Kuriles and southern part of Sakhalin, call Daisetsuzan ‘Kamuy mintar’, ‘the playground of the gods’ or more literally ‘courtyard of the gods’ in English. The name is due to the awe-inspiring scenery up in the mountains and splendid meadows in the plateau between the peaks, which is so magnificent that there is no other possibility than that it must be made for Gods. The name also shows the respect of the Ainu for the wonders of nature at Daisetsuzan.

At the foot of the mountains, there are several natural hot springs sprouting out, and for Japanese, the presence of hot springs requires building an onsen, a hot spring spa. There are indeed several onsen hot spring resorts in the area, for example Sounkyo onsen (outbound link, in Japanese only) and Asahidake onsen. Both of them are also main access points to Omote Daisetsu, while the former offers access to Mount Kurodake and the latter to Mount Asahidake.

Asahikawa city close to Omote Daisetsu is known for its timbering and related industries, especially furniture making. Timber has been abundant in the Daisetsu area but to protect its unique nature from overharvesting, the national park was established. Today, the industry strives to use the wood material as ecologically and economically as possible. You can admire Asahikawa’s current artisanship of wooden furniture and interior design, for example at Asahikawa JR train station.

Getting active at Daisetsuzan

The Japanese name of the area, Daisetsuzan, means in English the mountain of great snow. The area is indeed known for its abundant snow but also of the finest powder snow you can find. This of course means that there are many ski resorts in the area. For more adventurous skiers the area also offers opportunities for backcountry skiing (off-piste). 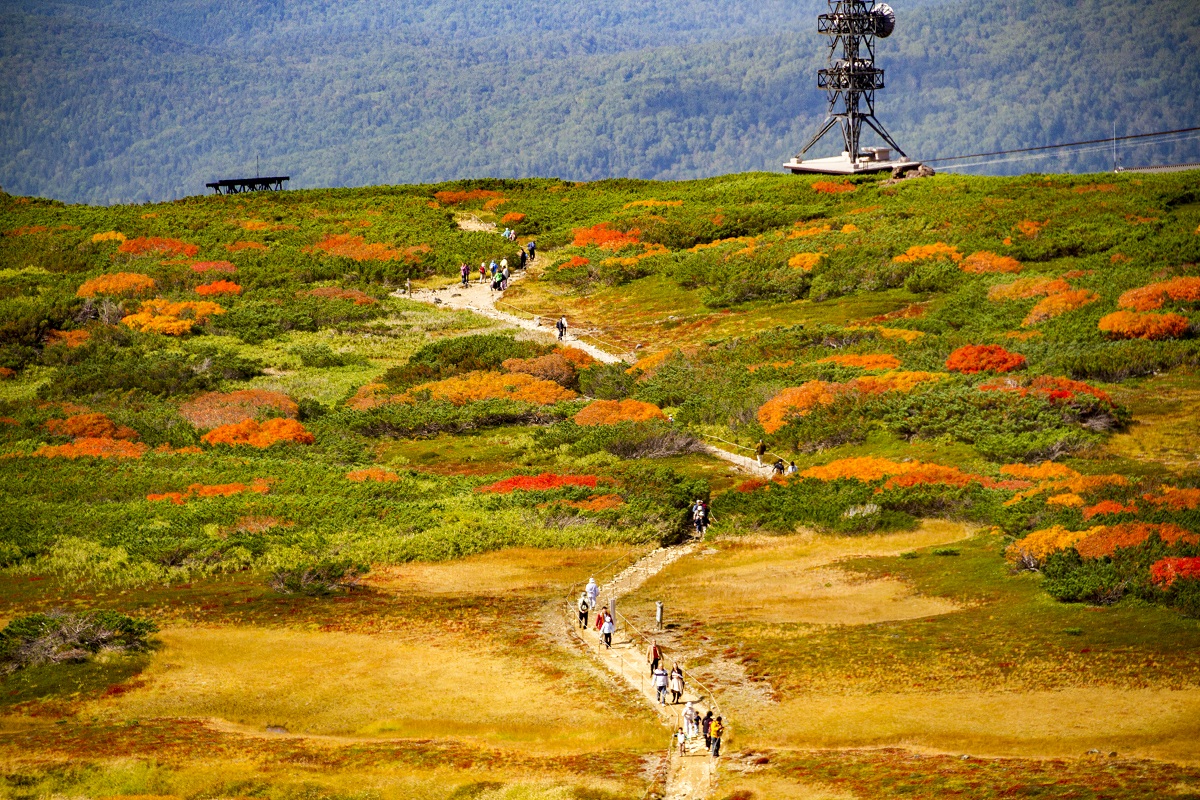 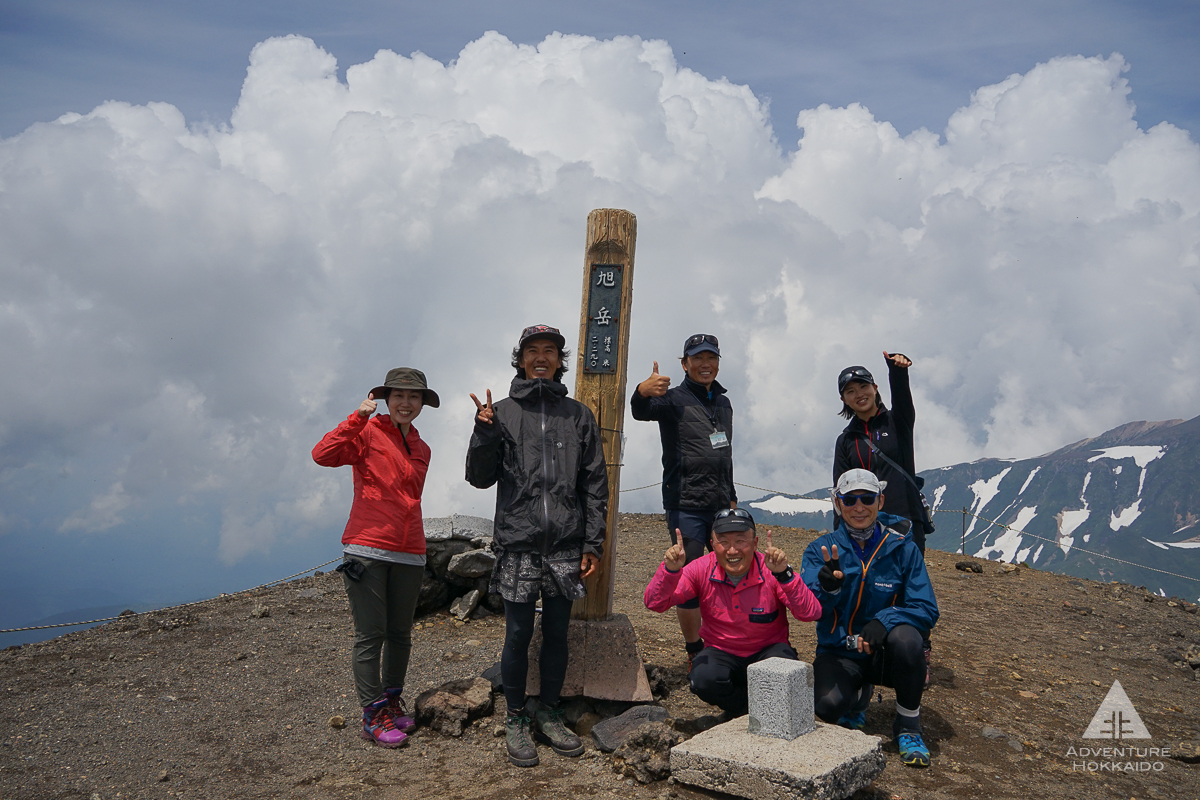 If you follow the outer ring of the majestic Ohachidaira volcanic caldera, you can set foot on the summit of Mount Hokkaidake (2,149m/7515ft) and Mount Kurodake (1,984m/6510ft), too, and then descend into the Sounkyo gorge with the help of a chair lift followed by another cable car. Asahidake onsen–Mount Asahidake–Mount Kurodake–Sounkyo onsen is a popular tour among the hikers and can be traversed within a day.

Maybe not so adventurous but nonetheless an enjoyable activity is soaking at the numerous onsen hot springs around Daisetsuzan. Especially popular onsen resort is Sounkyo onsen village in the middle of the mountains in the Sounkyo gorge. Other onsens worth visiting are for example Asahidake onsen and Daisetsu Kogen onsen deep in the Daisetsuzan mountains.

If you are into adventure travel, traveling around Hokkaido is a must to add to your travel bucket list!

We at Hokkaido Treasure Island Travel inc. can help you to design the adventure travel of your dreams. Not only are we a local company but we also cooperate with the local entrepreneurs, nature guides, and activity providers to offer you the best and the most authentic Hokkaido experience. We put an extra emphasis on supporting sustainable travel in Hokkaido: we make our tours and itineraries environmentally friendly while respecting the local culture and supporting local enterprises.

Check out our website (https://hokkaido-treasure.com/adventures/) for ideas to steal when planning your adventure travels and tours. We have created some sample itineraries for you to draw inspiration from or just to take into use as they are. The adventure tours section is still under construction but we will be adding more tours in the near future, so remember to check it out regularly for novelties. Find out what to do and where to go in Hokkaido depending on the season, see the seasonal itineraries page. One part of the website is the blog columns that you are reading at the moment. In this blog we introduce both off the beaten path destinations and more popular destinations but with a new and a more local twist.

Be it a hiking tour at Daisetsuzan national park or a once in a lifetime private Japan tour full of off the beaten track local activities, we are here for you. If you feel that the Daisetsuzan area should be on your travel bucket list, let us know!