History of Hokkaido: Kitamaebune cargo vessels in Matsumae and Esashi

Matsumae and Esashi are towns located in the southern tip of the Matsumae Peninsula, in the southern part of Japan’s northernmost island Hokkaido. Matsumae peninsula is the western fork of the larger Oshima peninsula and it faces the Sea of Japan and Tsugaru strait that stands between Hokkaido and Japan’s main island Honshu.

Matsumae is famed for its castle, which is the northernmost castle in Japan and the only Edo-style castle in Hokkaido. Esashi and the area surrounding the town is known for being a prosperous merchant town back when Kitamaebune, that is, trading cargo vessels bound to the north (literally ‘north-bound ships’), still sailed from southern Japan to trade for local products, such as herring, and the town still retains the atmosphere of the olden days.

The coast of the Sea of Japan from Matsumae to Eshasi prospered from the Kitamaebune trade, which can still be seen in both towns’ historical townscapes and in local culture, for example in Esashi Oiwake—a traditional folk song that has been passed down from generation to generation. Matsumae town also has many historical sites, the most famous of them, of course, being Matsumae castle (officially Fukuyama castle). The town is also known as the ‘home town of cherry blossoms’ (‘sakura no sato’ in Japanese) and is ranked in the top 100 of the best places to view cherry blossoms in Japan.

In this blog column, you can read about the history and attractions of Matsumae and Esashi.

If you are interested in the history of Hokkaido, you also might want to take a look at our previous blog column Yakumo: The town of samurai and rice.

The southwestern side of the Oshima peninsula in Southern Hokkaido, Japan, is home to towns that were trading centers for Kitamaebune cargo vessels (an outbound link). The coastline of western Hokkaido used to be abundant with a variety of fish, especially herring, and herring was the main merchandise that was traded in the area. The herring was used as food for humans but also as fertilizer to grow rice on the paddy fields of southern Japan to meet the growing demand for rice as well as cotton and other raw materials for developing industries. Unfortunately, this led to overcatching and the herring population of the area is still today only a faint memory of what it used to be.

Kitamaebune refers both to the trading ships bound to the north and the northern trading route they traveled. The route started in Osaka and continued to the west to go through Seto inland sea and Shimonoseki strait and after that to the north along the Hokuriku coastline of Japan’s main island Honshu until reaching Hokkaido and its port towns. The Kitamaebune shipowners did not only offer transportation services but were merchants themselves and were able to make huge profits with the highly demanded products from the north.

The Kitamaebune trade started in the 17th century and lasted until the early 20th century, steadily waning after the feudal system in Japan was abolished in 1871, a bit after when Japan had abandoned its closed country policy and started to adapt to modern innovations from other countries. The improvement in communication methods (telegram, phone) and especially the spreading of the railway system through Japan made the Kitamaebune unnecessary and the trade was no longer as profitable as before.

Esashi: the town of herring business

The history of Esashi town (an outbound link) extends hundreds of years back in time. The city grew on trading with local herring products. It was said that once there was so much herring in the sea around Esashi that the sea looked all white when the huge shoals of fish swam close to the surface. The herring caught during the early spring was processed and was ready to be shipped in May, which then became the busiest month for the trade. That became the origin of the saying:  “Not even Edo has such a May as Esashi” (‘江差の五月は江戸にもない’, ‘Esashi no gogatsu wa Edo ni mo nai’) meaning “not even Edo is as busy in May as Esashi” (Edo is the old name of Tokyo). In addition to herring, the sea around Esashi is also blessed with other kinds of seafood, such as sea urchin and abalone. The famed Kyoto cuisine specialty nishin soba (buckwheat noodles topped with herring) is said to be made from herring from Esashi. The herring business is not so thriving anymore; the town has quieted down quite a bit and had about 7,300 inhabitants at the beginning of 2021. 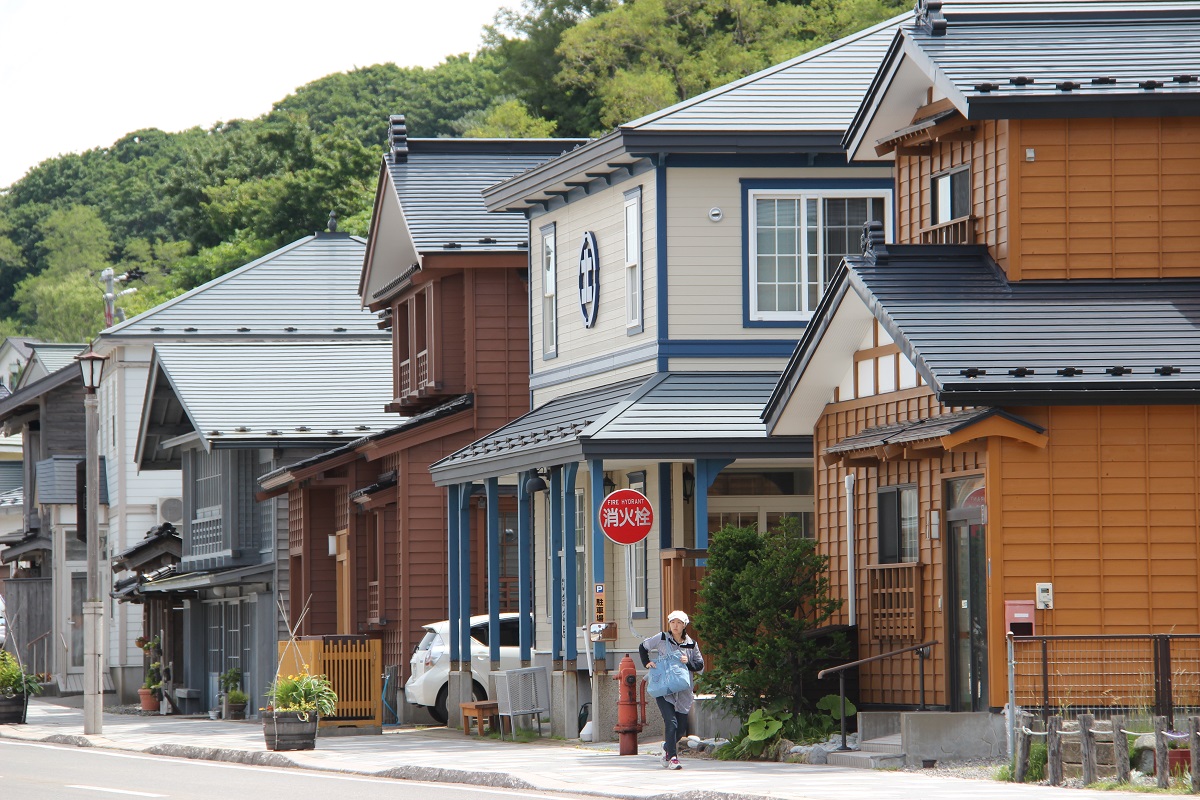 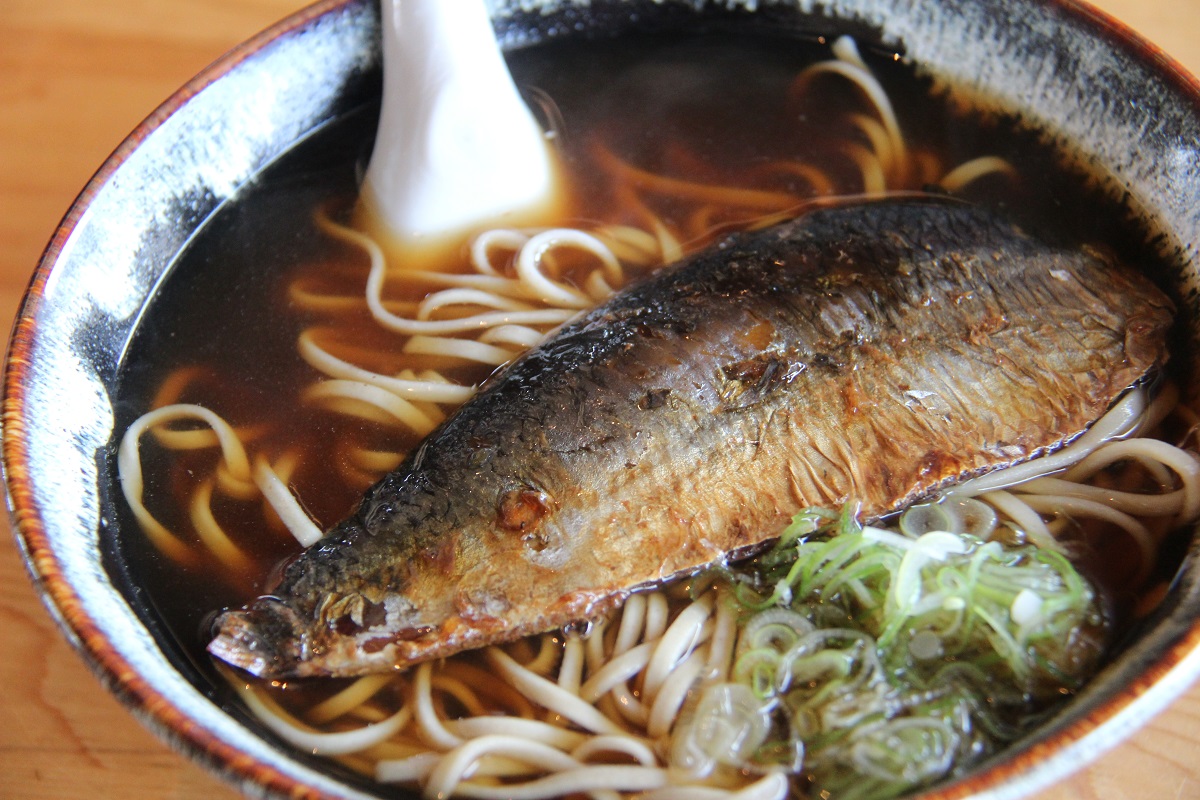 Like most of the other place names in Hokkaido, the name of the town comes from Hokkaido indigenous Ainu language. The name Esashi has two possible explanations: ‘e’ means ‘head’, ‘sa’ means ‘towards the beach’, ‘us’ is ‘to attach to’ and ‘i’ means ‘a place’, so the full name is ‘the place where the head (of the earth) attaches to the beach’, in other words, ‘a cape’. The town is indeed built on a small cape with an island called Kamomejima attached to the tip of the cape with a narrow neck of land. The other explanation is that the name comes from the words ‘e’ (to eat), ‘sas’ (seaweed), and ‘us’ (to grow in abundance), so it is a place where ‘a lot of edible seaweed grows’. The former explanation with the meaning of a cape seems to be a more popular one. 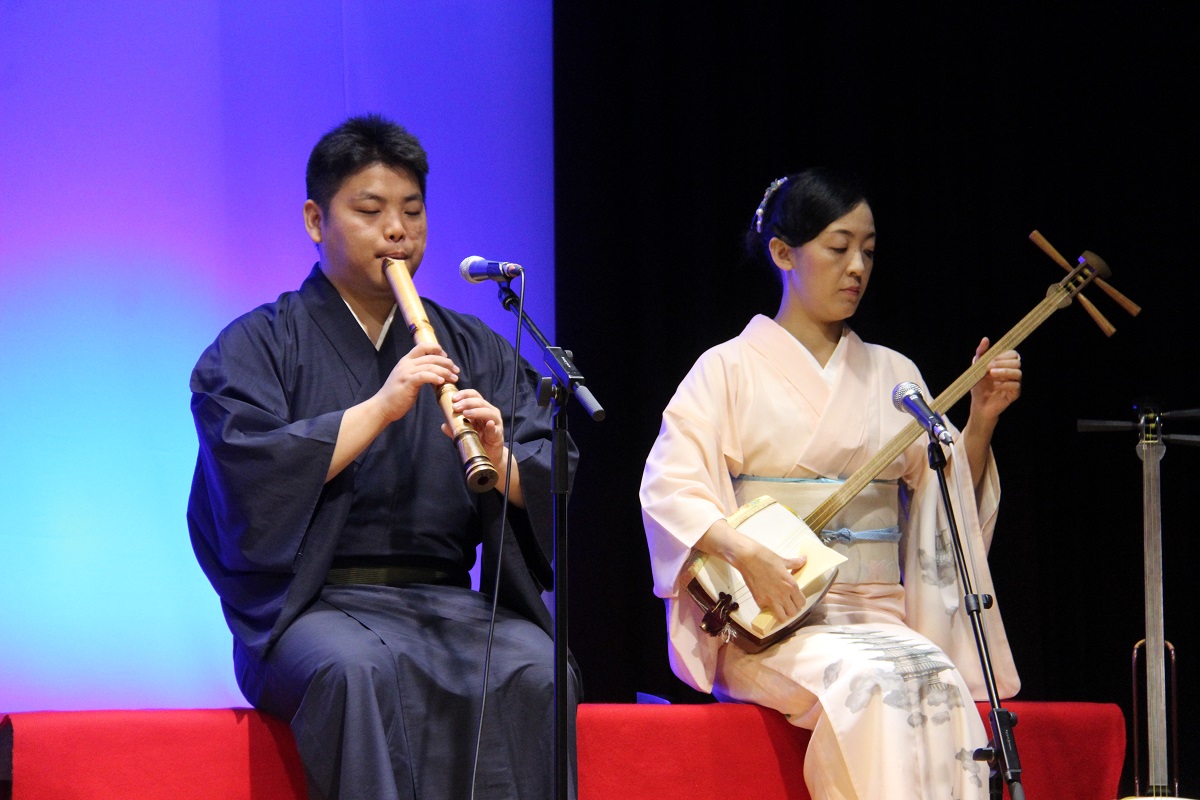 Since the town of Esashi has a long history, there are several long-lasting cultural traditions in the town, too. Esashi Oiwake (an outbound link) is a world-famous traditional Japanese folk song based on a horsemen’s song originally developed in Oiwake village in the Japanese main island Honshu. The original song—at the time called only Oiwake bushi or Oiwake melody—was spread through Japan and carried all the way to Esashi by the sailors of the Kitamaebune. In Esashi, the lyrics of the song were modified to fit the local environment and trade of herring fishing, and the original song was extended longer both at the beginning and at the end. The song is accompanied by a shakuhachi flute and a string instrument called shamisen. The annual contents of Esashi Oiwake singing have been arranged since 1935. You can listen to one version of the song in the video below.

Another interesting point in Esashi’s history is the Kaiyomaru warship. The warship was built in the Netherlands in 1860s and was one of the first modern warships in Japan. The ship was the flagship of the Ezo republic during the Boshin war—Japan’s last civil war between the new government forces and the old shogunate forces—in front of Esashi, but it was damaged in a storm and wrecked at the end of 1868. The wreck was found a hundred years later and the remains of the ship were slowly salvaged from the bottom of the sea. Now at the harbor of Esashi, there is a replica of the ship which serves as a museum that holds the remains of the original ship. 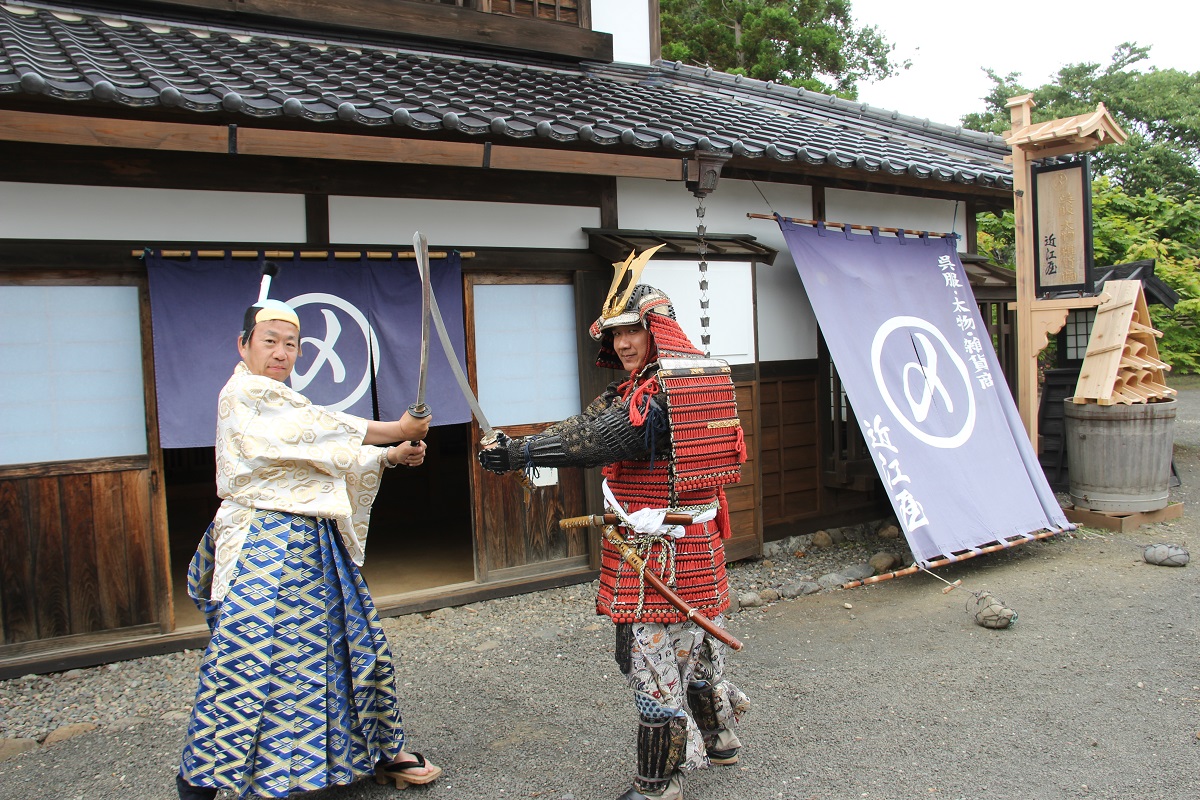 Matsumae town is located in the southernmost tip of Hokkaido with 20 kilometers wide Tsugaru strait separating it from Japan’s main island Honshu. Matsumae town and its castle were once the headquarters of the Matsumae clan and the center of the Matsumae estate, which was the northern limit of Japan until the end of the Edo period (1603–1868). Back then, the lands to the north of Matsumae were lands of Ainu—the indigenous people of Japan and Russia—and were considered as wilderness.

The area where Matsumae stands now was originally inhabited by the Ainu people. The town appears in historical writings from the 15th century and the starting point for the Matsumae clan was Koshamain’s War starting in 1457—named after the Ainu leader of the war—and as you might guess, the war was fought between Japanese living in Southern Hokkaido and the Ainu. Japanese samurai Nobuhiro Takeda (aka Nobuhiro Kakizaki) with his army defeated the Ainu forces and he and his descendants continued to defend their Japanese settlement in Southern Hokkaido for hundreds of years. The Kakizaki clan changed its name to Matsumae around the year 1600 and the town they lived in was also given the same name. From then until the late 19th century, the Matsumae clan monopolized trade with the Ainu. 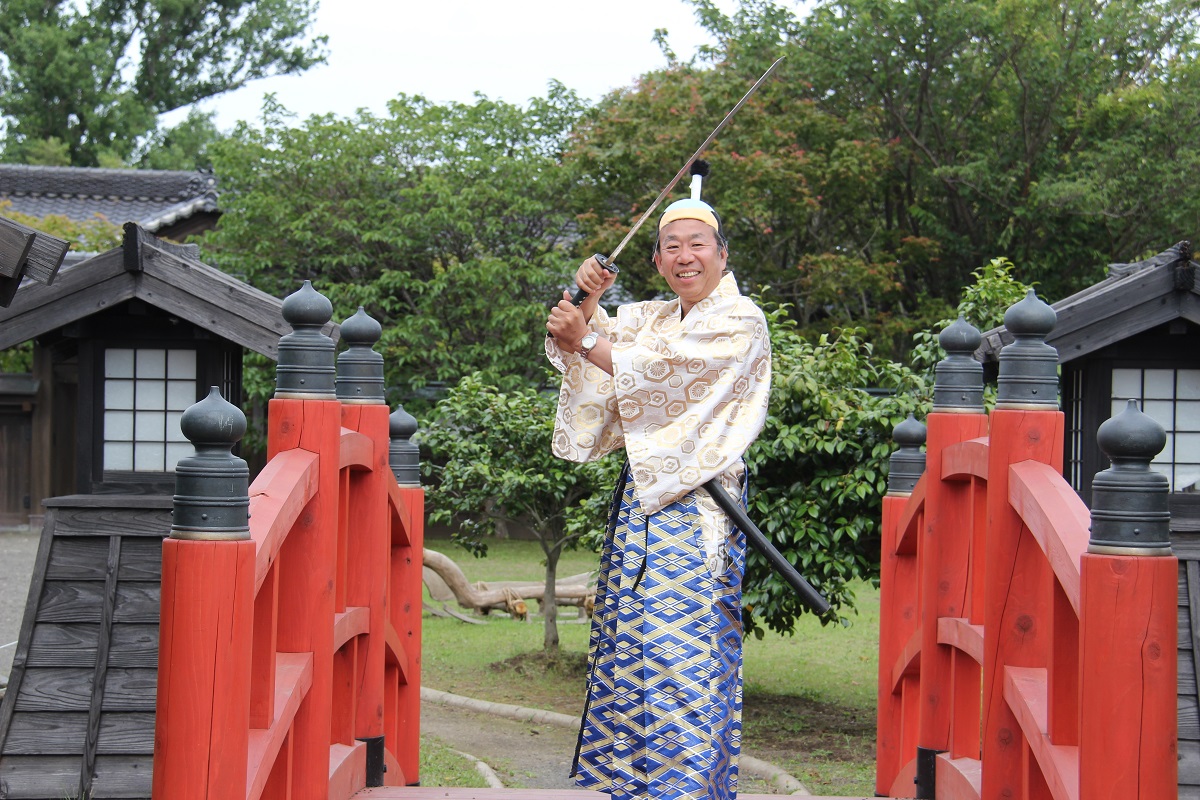 Matsumae was one of the harbors on the Kitamaebune route. The cargo vessels stopping at Matsumae did not only bring in goods to trade but also brought in the Japanese culture from all around Japan also to the northern towns. Especially the elegant Kamigata culture, such as ukiyo-e woodblock printing and kabuki theater, from Kyoto and Osaka flourished in Matsumae to the extent that people started to call it “the Little Kyoto of the North.” Today Matsumae is recognized as a Japan Heritage Site because it is “a unique space woven by the dreams of men who overcame rough seas—a port of call for Kitamaebune cargo vessel and a village of shipowners.”

Matsumae castle is the only Edo-style castle in Hokkaido and the northernmost such castle in Japan. Most of the Japanese castles have been destroyed and rebuilt several times in their history and also the current Matsumae castle is a rebuild from the 1960s. The castle grounds are now turned into a park with over 10,000 cherry trees of different varieties. Thanks to the different blooming seasons for different varieties, the cherry blossom season in Matsumae lasts as long as from late April to late May. Adjacent to the castle grounds lies a temple district that hosts many Buddhist temples, some of the oldest Japanese buildings in Hokkaido. 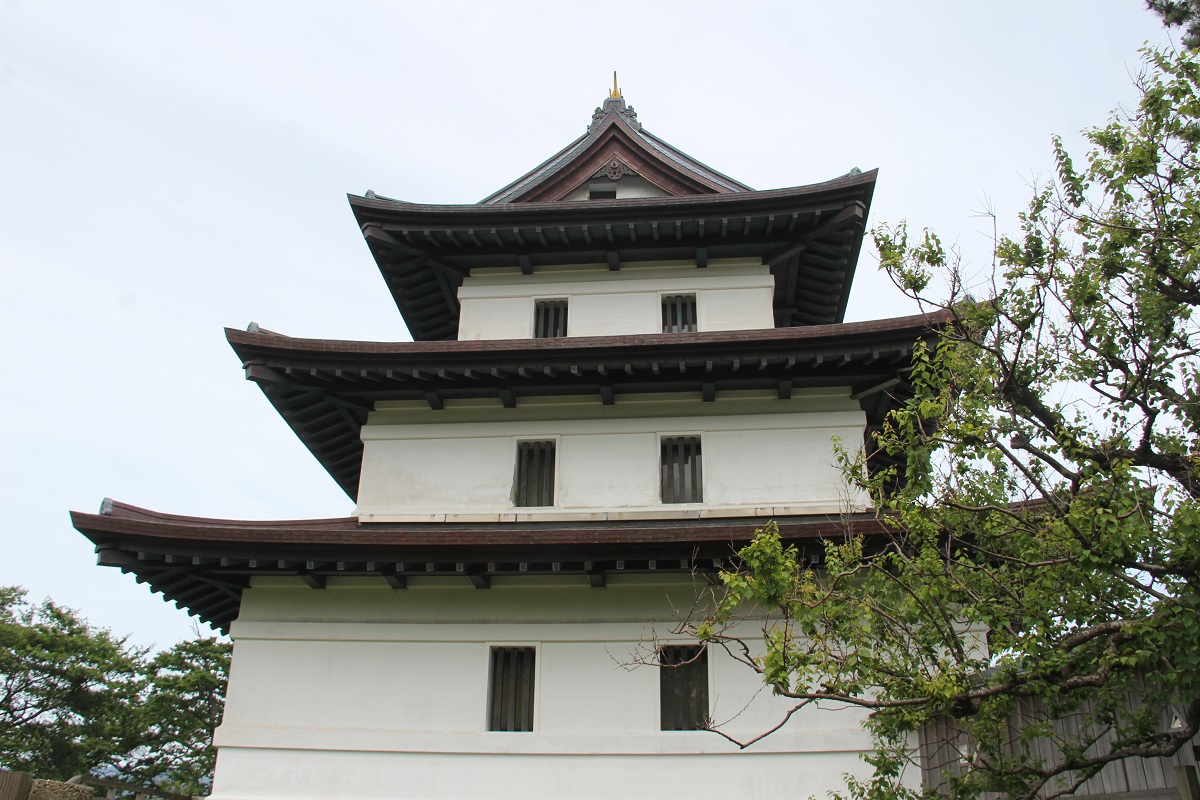 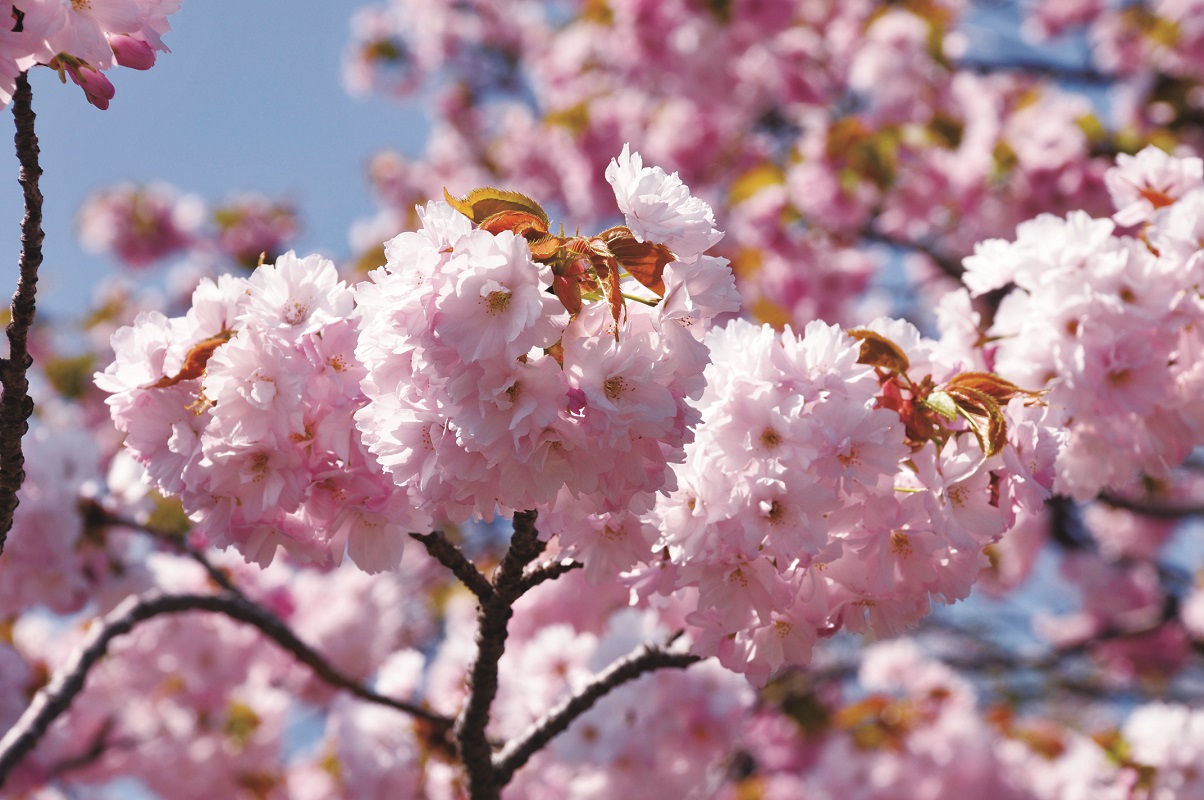 Travel tips for your Matsumae and Esashi trip

So, you might be wondering what to do in these towns full of history during your trip? Here you can find some tips and inspiration for your travel planning. Please note that it takes more than four hours by private car to get to Esashi from Sapporo, the main hub of Hokkaido, and even longer to Matsumae from Sapporo, so we recommend staying overnight if your starting point is Sapporo city. From Hakodate city, it takes about 90 minutes by car to both Matsumae and Esashi, so a one-day trip is also possible. The travel time between Matsumae and Esashi is about 70 minutes by car. 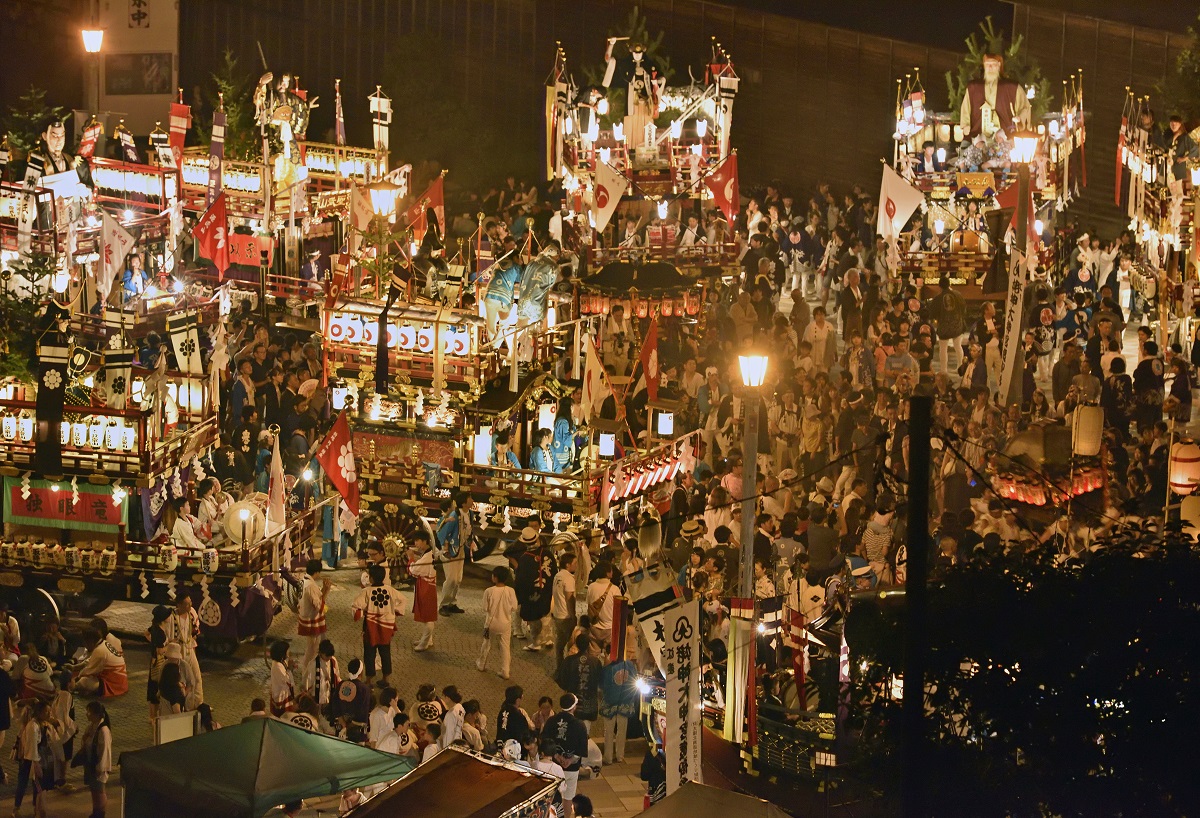 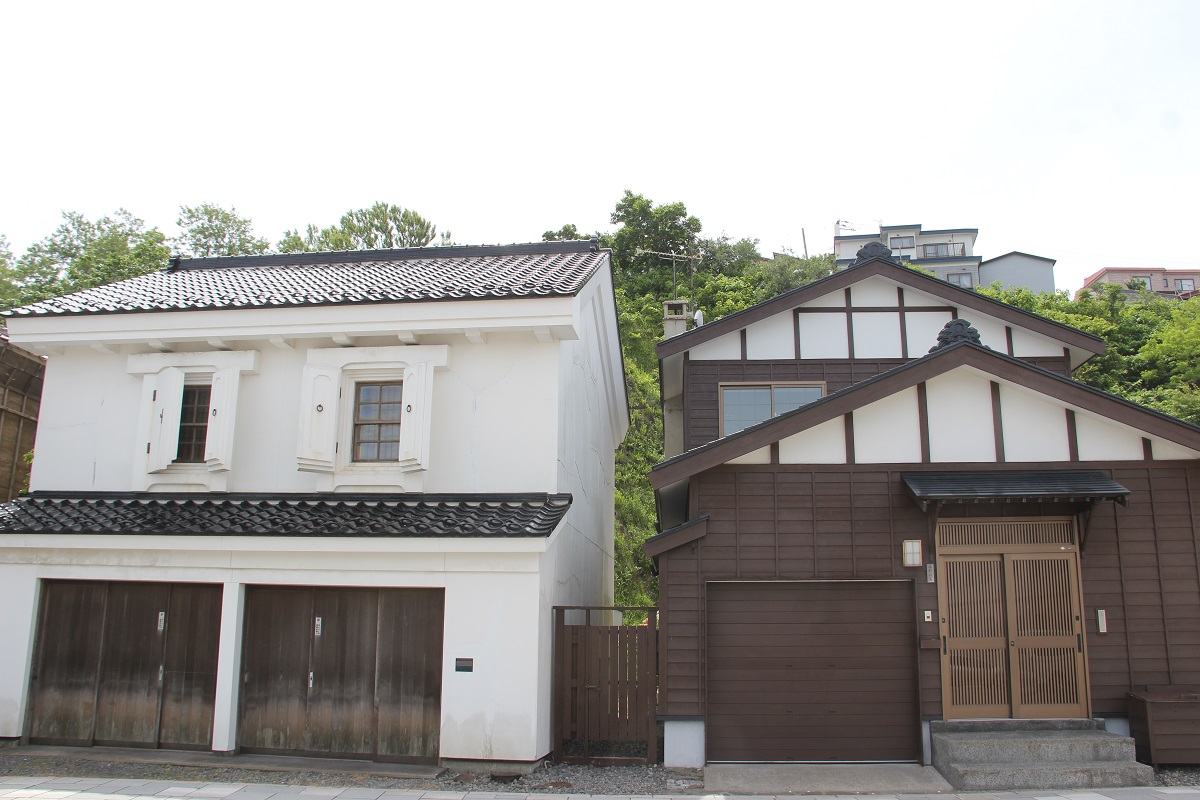 To delve deeply into Esashi history, we recommend for you a guided walking tour on the Inishie Kaido street while wearing a kimono. Visit and hear the intriguing stories of Ubagami grand shrine, Japan’s then strongest warship Kaiyomaru, the old house of the Yokoyama fisher family, and many more historical sights along the street. If you are traveling between August 9th and 11th, you’ll also get a chance to take part in the Ubagami-Daijingu Festival and enjoy the parade of carrying portable shrines and traditional floats through the town. 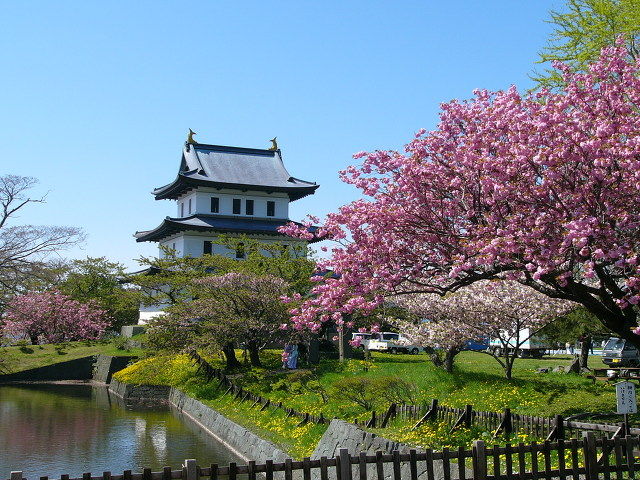 Since Matsumae is known as the hometown of cherry blossoms, we especially highly recommend visiting Matsumae if your trip is scheduled in the spring around April and May. The most picturesque place for cherry blossom viewing (hanami in Japanese) in Matsumae is of course at Matsumae castle. The best way to enjoy the beautiful pink and white clouds of blossoms and the historical atmosphere of the castle is by taking a stroll in the castle park and then having a picnic under the cherry trees as locals do.

So, what do you think, how about adding Esashi and Matsumae to your private tour itinerary? Full of history, interesting places to visit lined by stunningly beautiful sea, Esashi and Matsumae are an excellent addition to your travel plan. Let us know if you want to visit both of the towns or just one of them when you contact us.