Shibetsu (標津) is a town located in Eastern Hokkaido, the northernmost island of Japan. It’s part of the Nemuro area at the most eastern point of Hokkaido island. Because of its relatively remote location, Shibetsu is not your average tourist attraction, on the contrary: It’s far from the busy cities of Hokkaido and full of untouched, awe-inspiring nature. Shibetsu is especially famous for the Notsuke peninsula and its spectacular scenery and wildlife. With the winter ice horizon and the hauntingly beautiful end-of-the-world scenery, Shibetsu is one of the most interesting off-the-beaten-path destinations to travel in Hokkaido.

In this blog column, we’ll introduce you to one of our favorite winter trip destinations, Shibetsu, and give you some ideas about what to do there during your private tour. 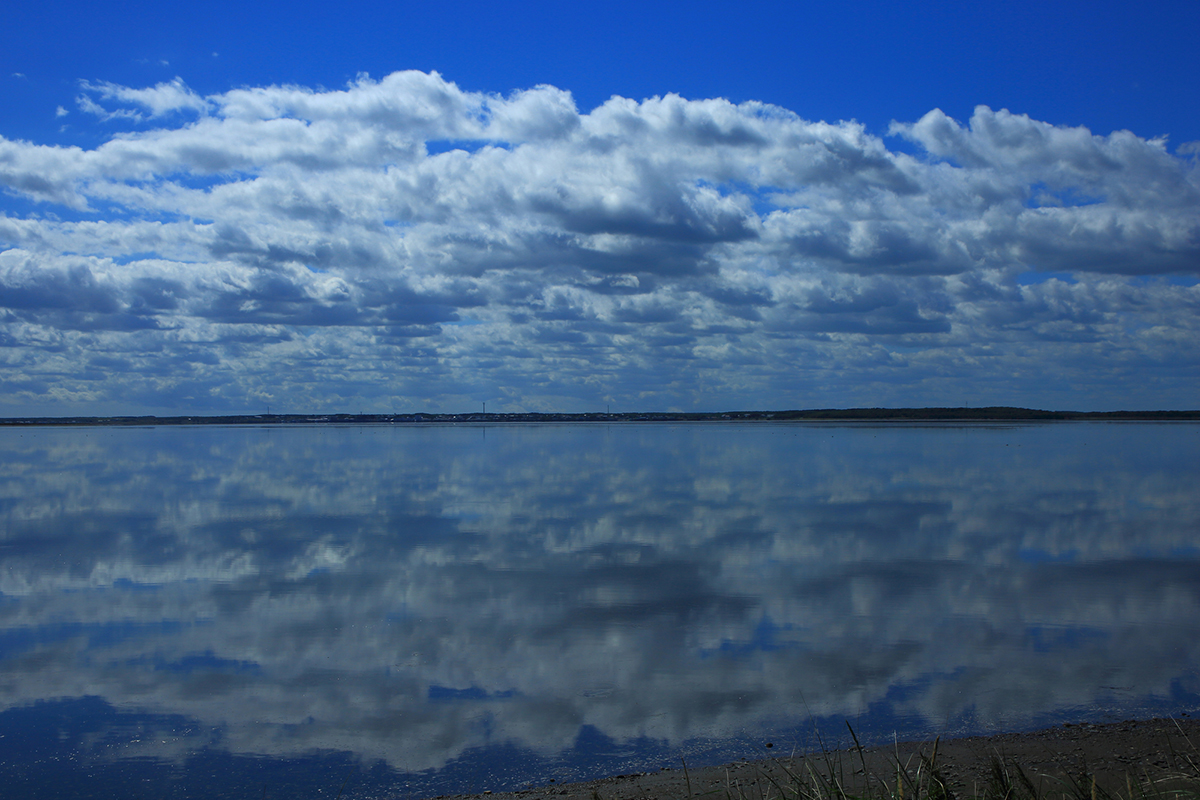 One thing worth noticing is that there are two towns called Shibetsu in Hokkaido. The names of the towns are written with different kanji characters: Shibetsu in Nemuro area, ie. the town this blog article is about, is written with characters 標津, and the other Shibetsu in Kamikawa area in central Hokkaido is written as 士別. If you are driving to Shibetsu and using a navigator, it’s best to double-check that you are heading to the correct Shibetsu! 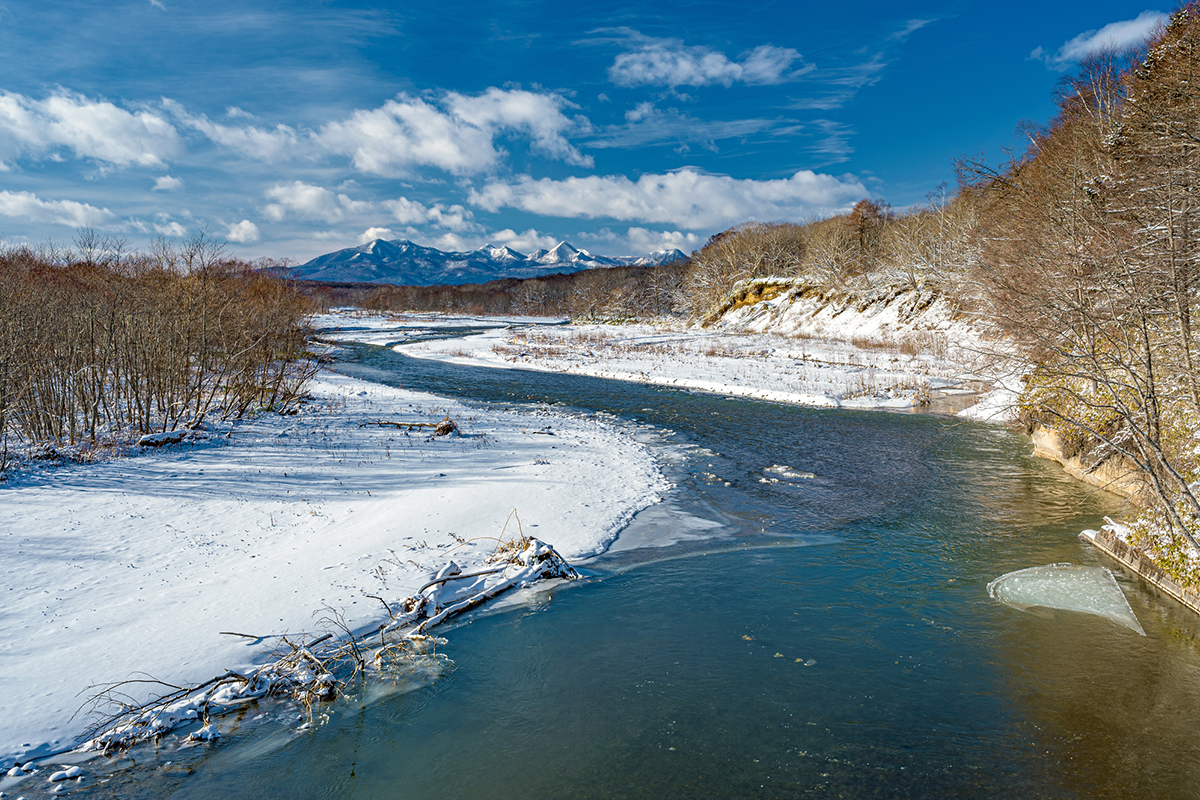 The reason there are two towns with the same name is due to the fact that the name comes originally from the Ainu language—the language of indigenous Ainu people of Japan and Russia—and being a common name, it is found in several other locations, too. In Ainu, ’si’ means ‘major/big/main/important’ and ‘pet’ means ‘river’, thus the Ainu name is ‘si pet’, that is, ‘a major river.’ There are several hundreds of rivers in Hokkaido and also Shibetsu has many rivers flowing through the area of the town. The major river refers probably to the largest river in the town, River Churui (忠類川). As you can imagine, considering a specific river as the main river of a certain area is very common and that is why there are several rivers that are titled the ‘si pet’ of the area. Two of these rivers have managed to get their names also attached to the towns that have been built on the river banks. Shibetsu is known for its amazing nature and especially hauntingly beautiful Notsuke peninsula. The area of the town is wide and it comprises a variety of nature from mountains in the north to the plains in the south and the coast in the east. The main businesses of the town are agriculture and fishery (an external link) but eco-tourism is a growing business, too. The most famous product of the town is its high-quality salmon, but it also produces other seafood such as surf clams and scallops and agricultural products such as potatoes and dairy products.

Shibetsu is located quite far away from the main hub of Hokkaido, Sapporo City. Furthermore, the public transportation to the town and eastern Hokkaido, in general, is somewhat limited, with no train connection and some busses running between Sapporo and the town. The time required for a car ride from Sapporo is over 6 hours. If you are busy, the fastest way to reach Shibetsu is to take a plane. The closest airport to Shibetsu is Nakashibetsu airport in the Nemuro area. If you are moving to Shibetsu from Sapporo, you can take a plane from New Chitose Airport. There are 3 daily flights and the flight time is about 50 minutes. If your starting point is in Tokyo, you can fly to Nakashibetsu from Haneda airport. There is one daily flight and the flight time is about 1 hour and 40 minutes. From Nakashibetsu airport, it takes about 30 minutes by car to get to the center of Shibetsu town.

If you want to get more off-the-beaten-path travel ideas in eastern Hokkaido, be sure to take a look at our earlier blog columns White Weekend at Shiretoko Peninsula, Kushiro: The city of cranes and ancient marshlands, Akan-Mashu National Park: Hot springs and caldera lakes, Okhotsk: The land of flowers in the East, and Kitami: The city at the crossroads of cultures, just to mention a few.

Notsuke peninsula at the end of the world Notsuke peninsula (Notsuke Hanto / 野付半島) is a bow-shaped land strip that arches itself between the towns of Betsukai and Shibetsu protruding far into the Sea of Okhotsk. The soil material of the peninsula is sand and being 26 kilometers long, it is the largest of this type of peninsula in Japan. In the Ainu language, the name of the peninsula is notkew, which means ‘lower jaw.’ There is an old legend that once an enormous whale landed on the coast of Shibetsu and when the whale died, its lower jaw bone was left behind and became the base of the Notsuke peninsula giving it its peculiar shape. 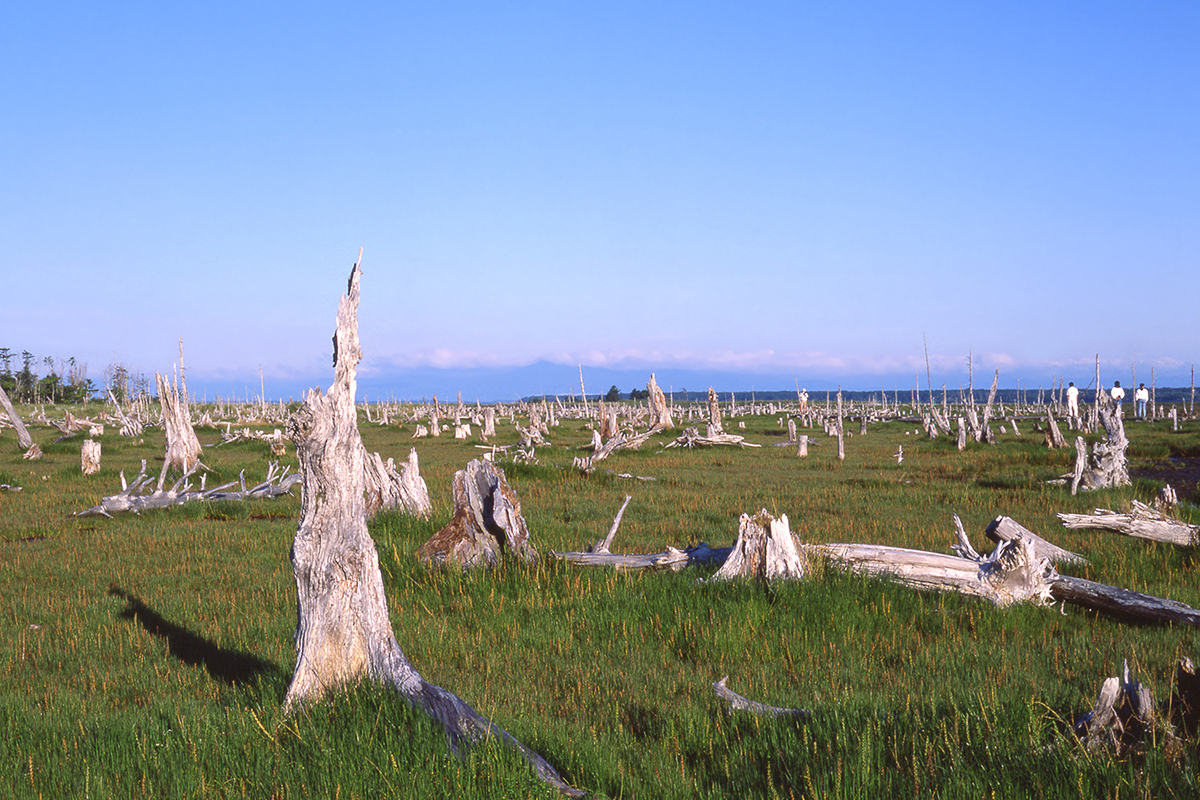 The peninsula is a hugely popular destination for outdoor activities among the Shibetsu locals, not least because of its amazing sceneries during all the seasons. Maybe the most well-known place on the peninsula is Todowara (トドワラ), which is a forest of dead, dry pine trees still standing in the place they used to grow. As the soil of the Notsuke peninsula is sand, it lets the water easily in and out and when the level of seawater rose, the pine forest could not take the rising level of saltiness in the water. This forest is said to be scenery, which you can see at the end of the world. In the winter, the shallow Notsuke bay between mainland Hokkaido and the Notsuke peninsula freezes and becomes a flat plain of snow. This scenery is called ice horizon (an outbound link) and it’s another famous view of the peninsula. 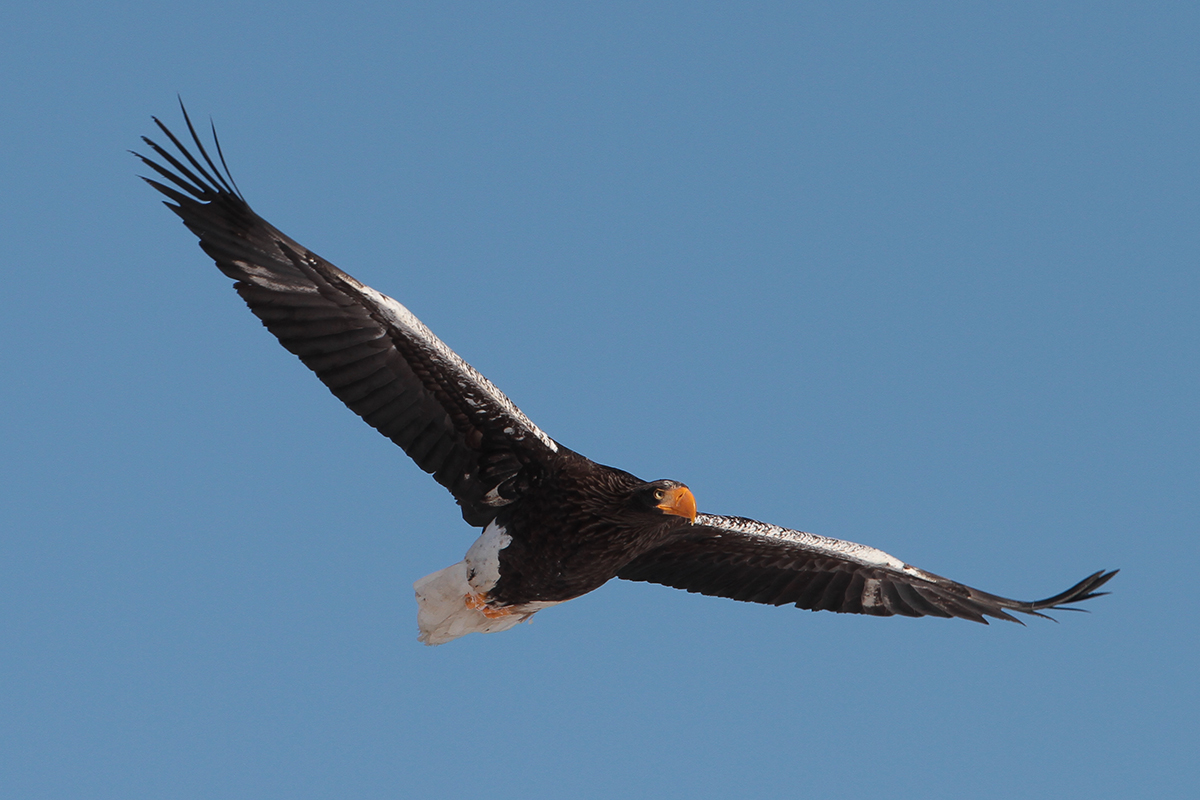 Notsuke peninsula is an excellent place for bird watching. Among the birds populating the peninsula are Stellar’s sea eagles, white-tailed eagles, cranes, and migratory birds such as whooper swans. Other than birds, the animals you can expect to see at Notsuke are Ezoshika deers, Ezo red fox (kitakitsune in Japanese), and seals. During the winter, the herds of deer roam the peninsula looking for food, since there is relatively little snow, and it’s easier to dig out the grass. The foxes come also for food and it’s fun to watch these playful animals frolicking in the snow. Some of the seals you can see at Notsuke peninsula are local inhabitants but some of them are accidentally brought there by the drift-ice flowing down to the south from the north (the seals don’t seem to mind the free ride, though). 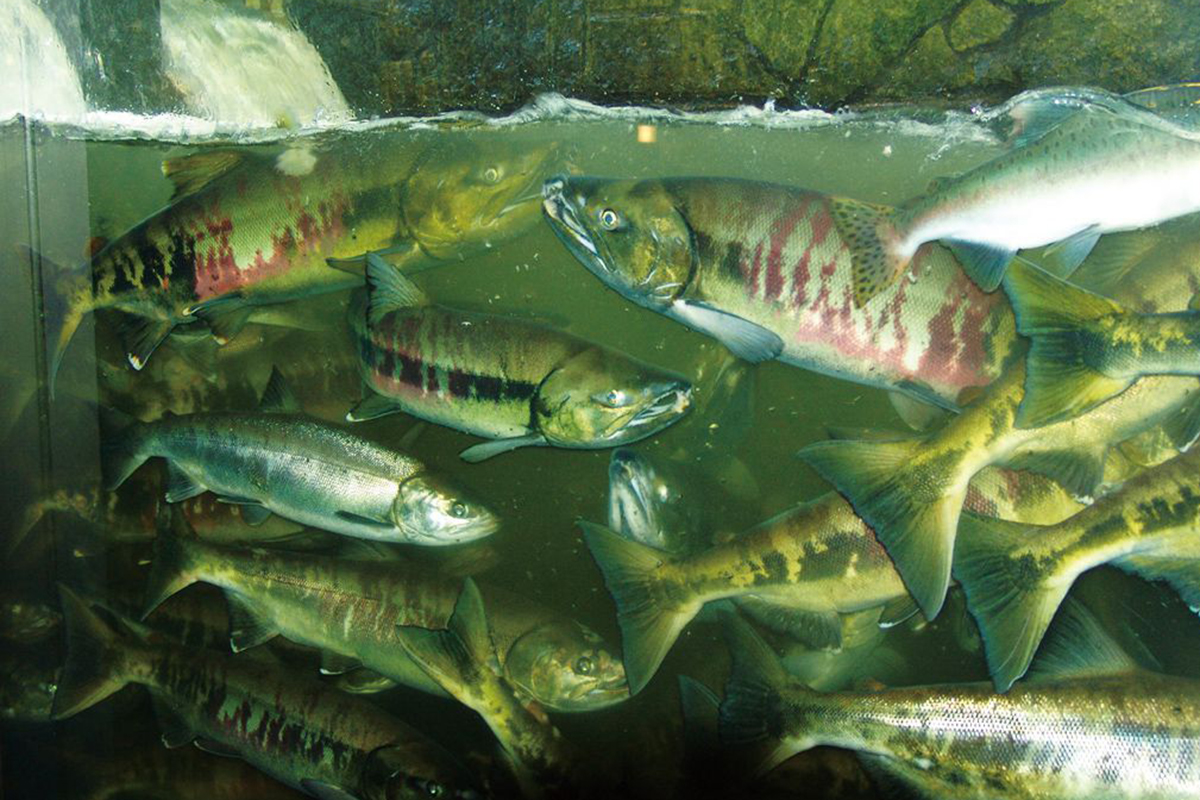 Shibetsu lives mainly on fishing and salmon is the main catch in Shibetsu, so it is no wonder that THE thing in Shibetsu is salmon. There are numerous ways to enjoy your salmon in Shibetsu: you can have it grilled or fried, in a soup, or as sashimi, that is raw, or you can enjoy a bowl of salmon roe. However, there are some dishes that are especially typical to Shibetsu. Many people outside Japan are familiar with a Japanese dish called shabu-shabu and there are many shabu-shabu restaurants also abroad. Shabu-shabu is a hotpot dish of thinly sliced meat and vegetables that are quickly boiled in a pot and then dipped in different kinds of sauces. However, have you ever heard of salmon shabushabu? Salmon shabushabu is one of the popular salmon dishes in Shibetsu. Another favorite is sakechazuke or fried salmon and rice with green tea. Then there is chanchanyaki or a dish of grilled salmon and vegetables. Ruibe or sliced frozen salmon is a traditional Ainu dish. Ruibe literally means ‘melted food’ and it’s eaten half-thawed. 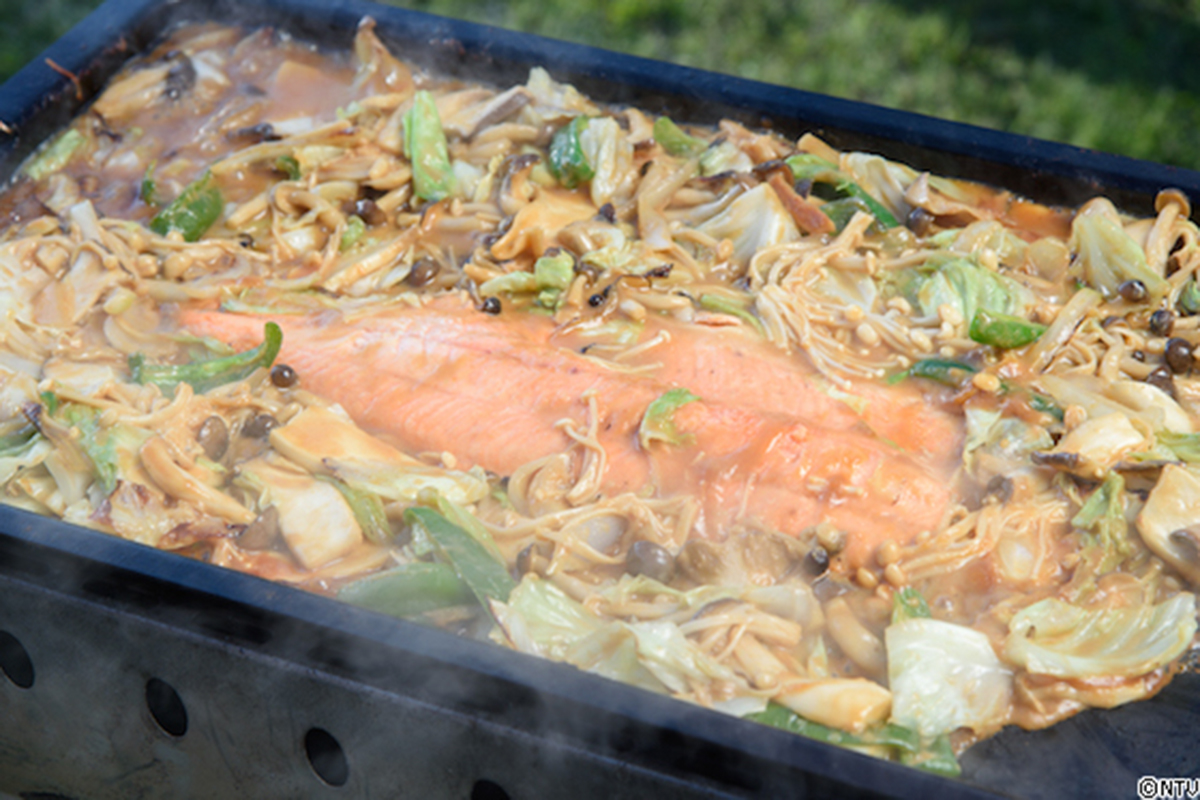 Salmon is an essential part of Ainu cuisine and culture. In the Ainu language, salmon is called ‘kamuycep’ or the ‘the fish given by the deities’. According to the traditional Ainu worldview, all the things around us are ‘kamuy’ or deities/gods. However, salmon and deer are an exception. Why? While salmon and venison were the backbones of Ainu diet and in the olden days Ainu’s survival depended on these two, on the other hand, they are so ubiquitous that it was difficult to see them as deities. Instead, they were thought to be gifts from the kamuy, deer from Yuk kor kamuy (the deity that governs the deer), and salmon from Cep kor kamuy (the deity that governs the fish).

Sampling all these different salmon dishes is a must during your 2022 winter trip in Hokkaido and Shibetsu! To learn even more about salmon and Shibetsu, watch the video below.

Ideas for your winter trip to Shibetsu 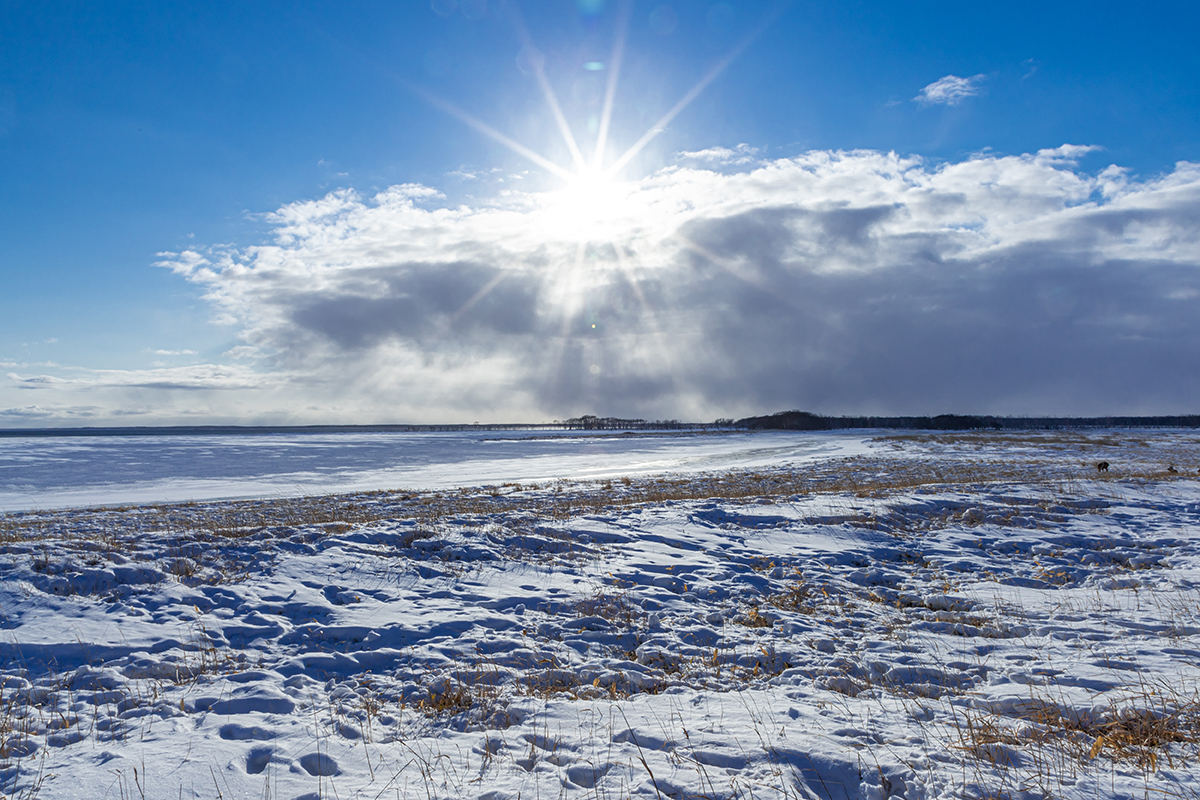 The Notsuke peninsula, Todowara with its at-the-end-of-the-world scenery, and the Notsuke bay with its ice horizon are something you don’t want to miss in Shibetsu winter. You can choose snowshoeing, a snowmobile or a sled ride, bird or seal watching, or a photo tour to shoot for example deer or foxes; the combination of the activities is up to you. If you need any further help to make your winter trip plan to Hokkaido and Shibetsu, don’t hesitate to contact us through our contact form. 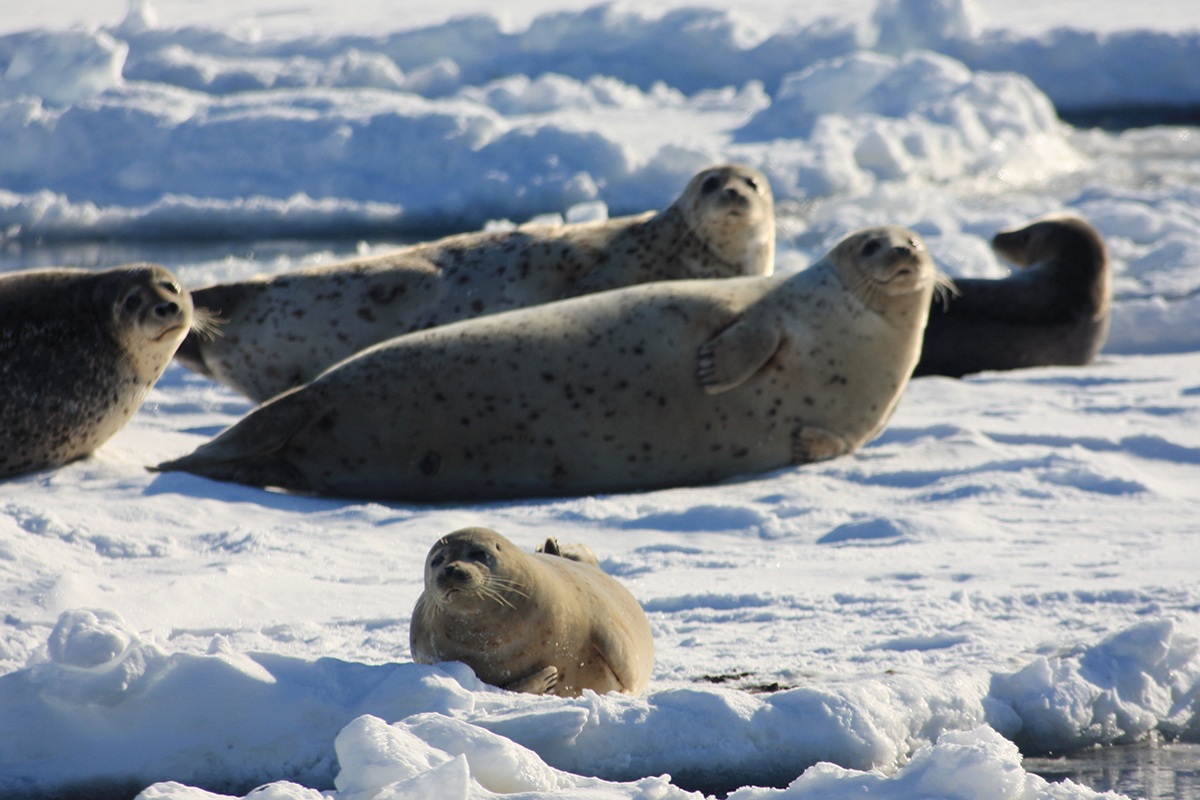 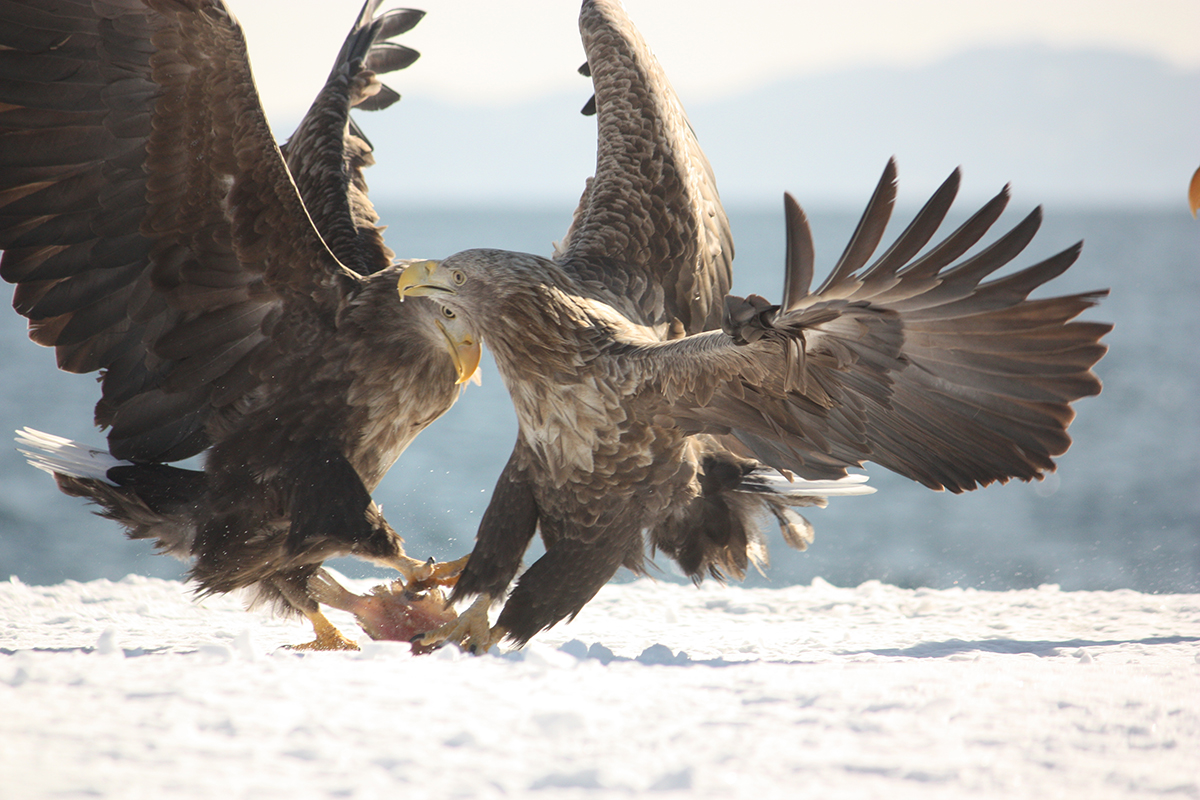 It’s of course possible to add other only-in-the-winter types of activities to your travel plan. Other activities you can enjoy in eastern Hokkaido are for example winter canoeing, red-crowned crane watching, snowshoeing, and dogsledding, just to mention a few. You can try your skills in winter canoeing at Arekinai River in Kushiro city—located less than a hundred-kilometer (about a 60-mile) drive from Shibetsu. In Kushiro, you can also watch the graceful red-crowned cranes and if you are lucky, you might also see them dancing while attempting to find a partner. 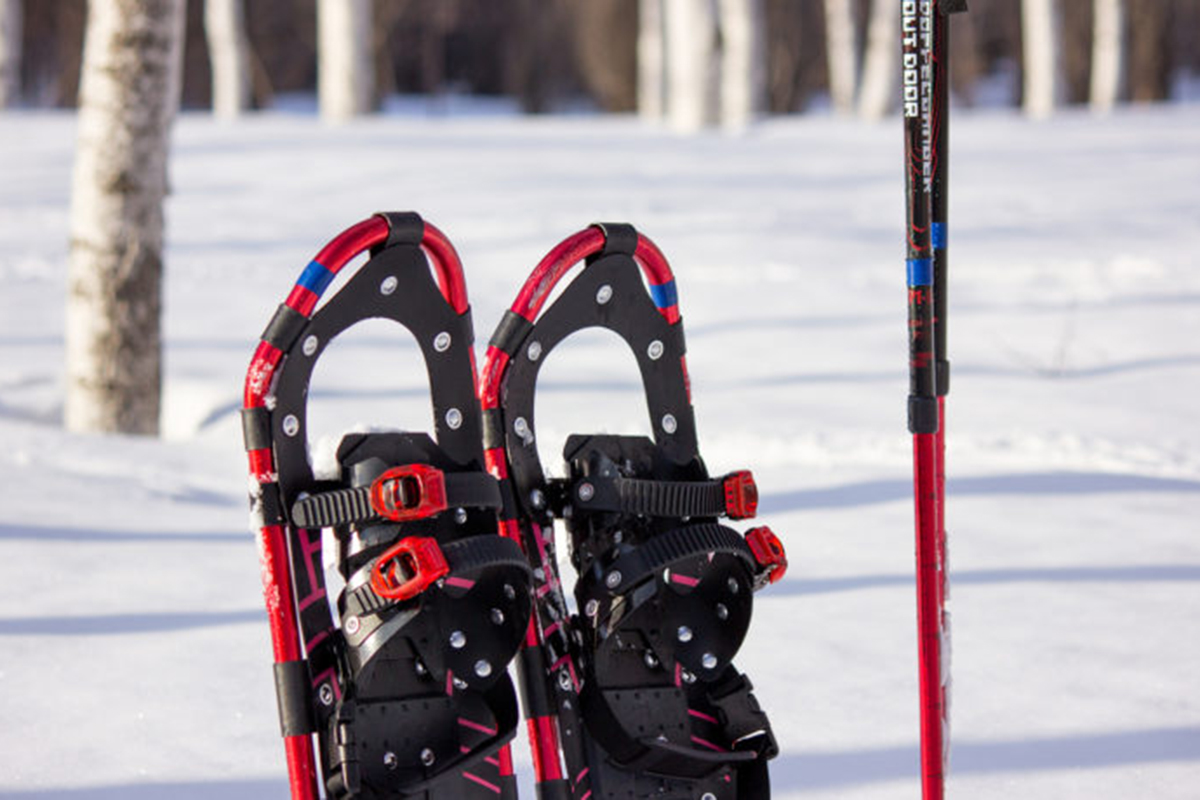 Snowshoeing is an activity that is offered almost everywhere in Hokkaido in the winter. One of the most impressive locations for snowshoeing is the forest around Lake Akan. The mysterious atmosphere in the wintry forest is beyond compare. The distance between Lake Akan and Shibetsu is about 120 km/75 miles and it takes about 3 hours to drive from Shibetsu to Lake Akan. For dog sledding, you can head for example to Shikaoi town (about 250-km/155-mile-long ride from Shibetsu) and enjoy a dog sledding experience arranged by our long-time partner, Mushing Works (an outbound link). The town of Shikaoi is located on the vast Tokachi plain, so there is plenty of space to ride with your team of dogs and really feel the speed.

If you like the idea of adding Shibetsu and some other locations with exciting winter activities to your winter trip bucket list, let us know when you contact us!