Onuma Quasi-national Park is located at the border of the towns of Nanae, Shikabe, and Mori, in Oshima Peninsula of southern Hokkaido—the northernmost island of Japan. The park covers 90.83 square kilometers (35 square miles) and is centered around two lakes, Onuma and Konuma, and volcanic Mt. Komagatake.

Onuma is known for its beautiful birch and maple forests that surround the lakes. It is titled as one of the best spots to see the autumn leaves in Hokkaido. The quasi-national park stretches itself in the area of three neighboring towns: Nanae, Shikabe, and Mori. The closest town to Onuma, Nanae Town, is famous for its agricultural products, such as apples and grapes. Shikabe at the shore of Uchiurabay is known for its seafood. A bit northwest to Shikabe lays Mori town, and like Shikabe, it is a fishers’ town. These three towns are referred to together as the Kankoma area.

This blog column is about Onuma Quasi-national Park and the beautiful wetlands in the park. Read on to find out more about the unique nature of Onuma and the Kankoma area.

Onuma Quasi-national Park (an outbound link) is located in the southeastern part of Oshima Peninsula, the large peninsula that stretches to the south and is parted from the Japanese main island by Tsugaru Strait. Onuma (also written as Ōnuma) has been assigned as a quasi-national park—meaning that is governed by the local authorities rather than the central government of Japan—in 1958. The area of the park covers 90.83 square meters (35 square miles), which makes it the smallest national park in Hokkaido. However, the compact park covers a variety of nature, especially unique wetlands at the lakes and the volcanic mountainous area around Mt. Komagatake 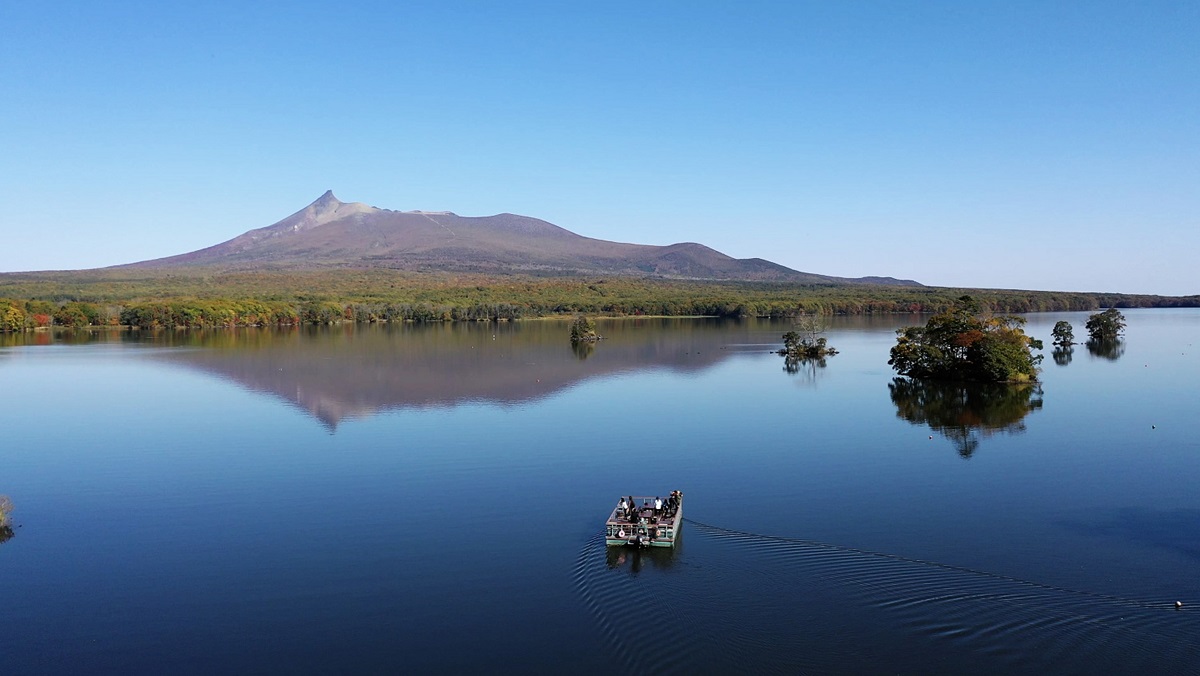 There are several ways to travel to Onuma. It takes about 4 and a half hours to drive from Sapporo to Onuma and about four hours from Chitose Airport. Hakodate is the closest city to Onuma and is about a 45-minute-long drive away. If your point of departure is in Tokyo, an interesting way to reach Onuma is to hop on a Shinkansen bullet train in Tokyo and travel all the way up north to the current Hokkaido Shinkansen line (an outbound link) end station of Shin-Hakodate–Hokuto. The travel time from Tokyo to Shin-Hakodate–Hokuto is 4 hours and 10 minutes. At Shin-Hakodate–Hokuto, you can transfer to a local train and arrive in 10 minutes at Onumakoen station, which is the closest station to the Onuma Quasi-national park entrance. Alternatively, we can arrange a driver to come and pick you up at the Shinkansen station, so that you can avoid the hassle to move around with your luggage. 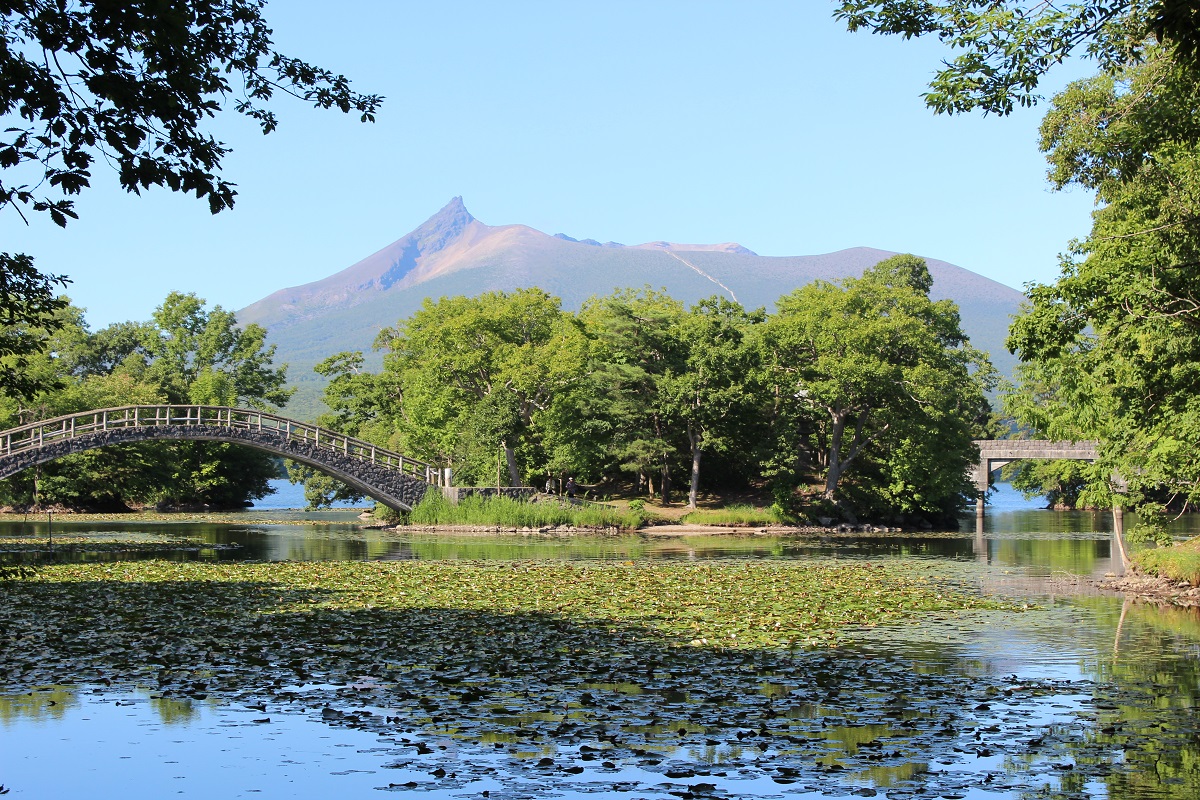 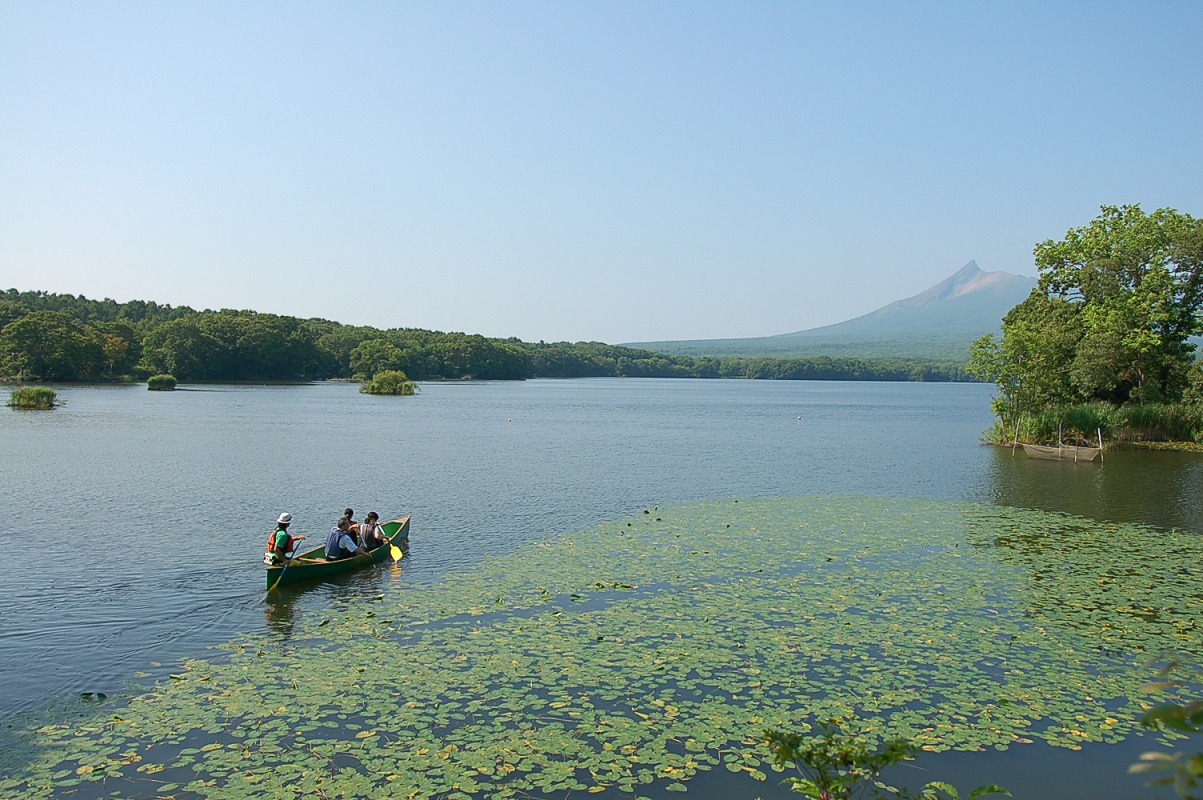 The national park area includes Mt. Komagatake and two lakes called Onuma and Konuma. Mt. Komagatake is a volcano, like most of the other mountains in Japan. The lakes were formed when Mt. Komagatake erupted about 50,000–30,000 years ago. The eruption caused mudflows, which blocked the outflow from the depressions at the foot of the mountain and the lakes were born. Now the lakes are home to waterfowl such as goose and ducks and different kinds of wetland plants.

The video below has narration in Japanese but you don’t need to understand the explanation to realize why it is worth adding Onuma to your travel plan.

Lake Onuma and Konuma are two lakes at the foot of Mt. Komagatake formed by a volcanic eruption several tens of thousands of years ago. Actually, the lakes are connected by a narrow strait, so technically speaking they are one single lake. There is a bridge over the strait and with a road and Hakodate railway line crossing the strait there. The visitors can explore the whole area around the lakes by foot following the routes around the lake shore. 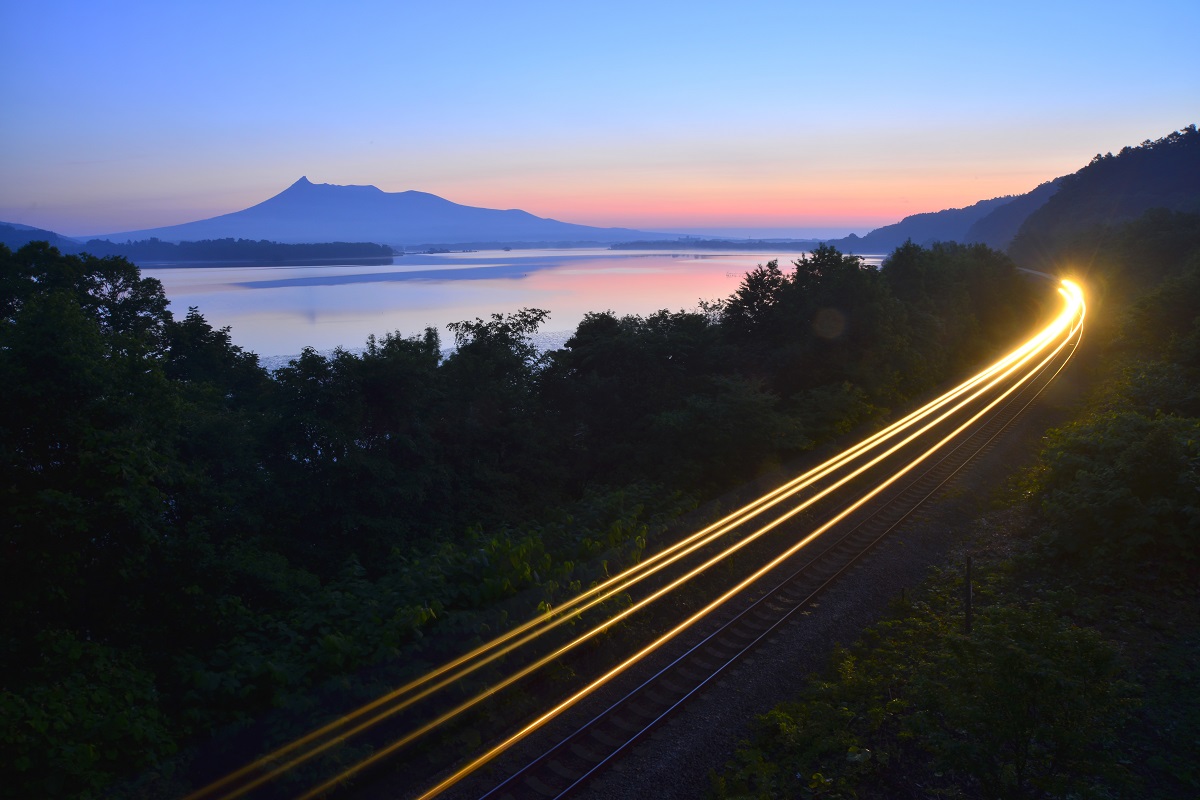 The lakes are home to a number of different bird species. There are several waterfowl species living at the lakes, such as whooper swans, grey herons, great white egrets, spot-billed ducks, Mandarin ducks, and little grebs. Other birds you can see around the lakes are Steller’s sea eagles, white-tailed eagles, great spotted woodpeckers, white-backed woodpeckers, black woodpeckers, bramblings, Japanese grosbeaks, and long-tailed tits. Because of all of these different species inhabiting the area, the wetlands of Onuma have been registered under the Ramsar Convention of Wetlands of International Importance Especially as Waterfowl Habitat (an outbound link) since 2012. There are also other animals living in the area, such as Ezo deer, Ezo squirrels, and Ezo red foxes.

What comes to the vegetation, in the spring, the Asian skunk cabbages bloom around the wetlands, followed by irises and water lilies later in the summer. The forests around the lakes consist for example of maples, rowans, and birches, and they offer an especially wonderful view in the fall with their colorful foliages. Onuma is indeed titled as one of the best spots to admire the blazing colors of the autumn leaves. 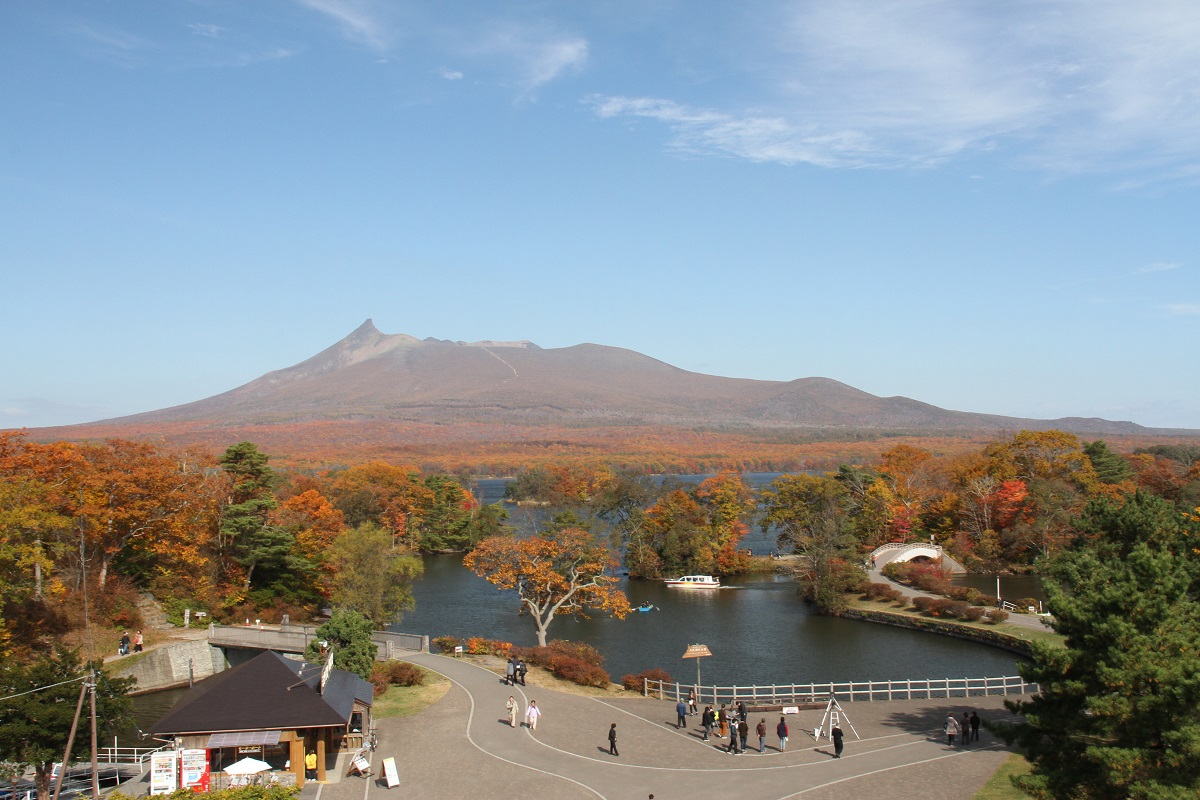 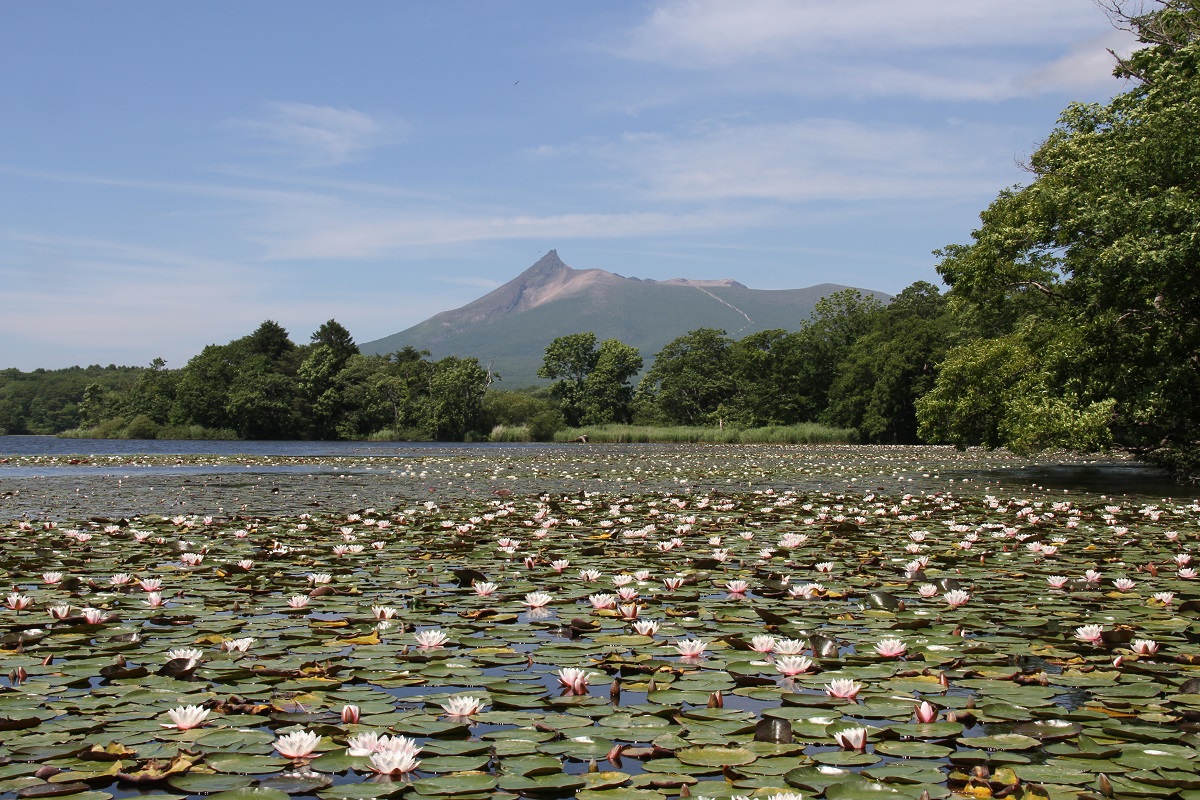 The name Onuma is Japanese and means ‘a big pond’. However, the original name of the place comes from the Ainu language—the language of indigenous Ainu people of Japan and Russia. In Ainu, the name is ‘poroto’ and it means—surprise!—‘a big pond.’ Konuma is also Japanese, and means ‘a small lake.’ The original Ainu name is ‘ponto’ with the same meaning as the Japanese name. Actually, about 80% of the place names in Hokkaido come originally from the Ainu language. Most of the place names have just been adjusted to the Japanese sound system and resemble their original counterparts. Some of the names—like Poroto and Ponto here—have been translated into Japanese.

If you want to know more about activities at lakes in Hokkaido, read also our earlier blog columns Lake Shikaribetsu: Crystal Clear Waters and Peeping Pikas and Toya: An Adventure among Volcanoes.

Mt. Komagatake is an active stratovolcano. It became active in 1640 after a 5,000-year-long period of dormancy and 15 different kinds of volcanic activities from a major eruption in 1694 to a phreatic eruption (a vapor eruption) in 1996 have been recorded since. At the moment, it is forbidden to climb to the highest point of the mountain—Kengamine peak—due to eruption hazard. 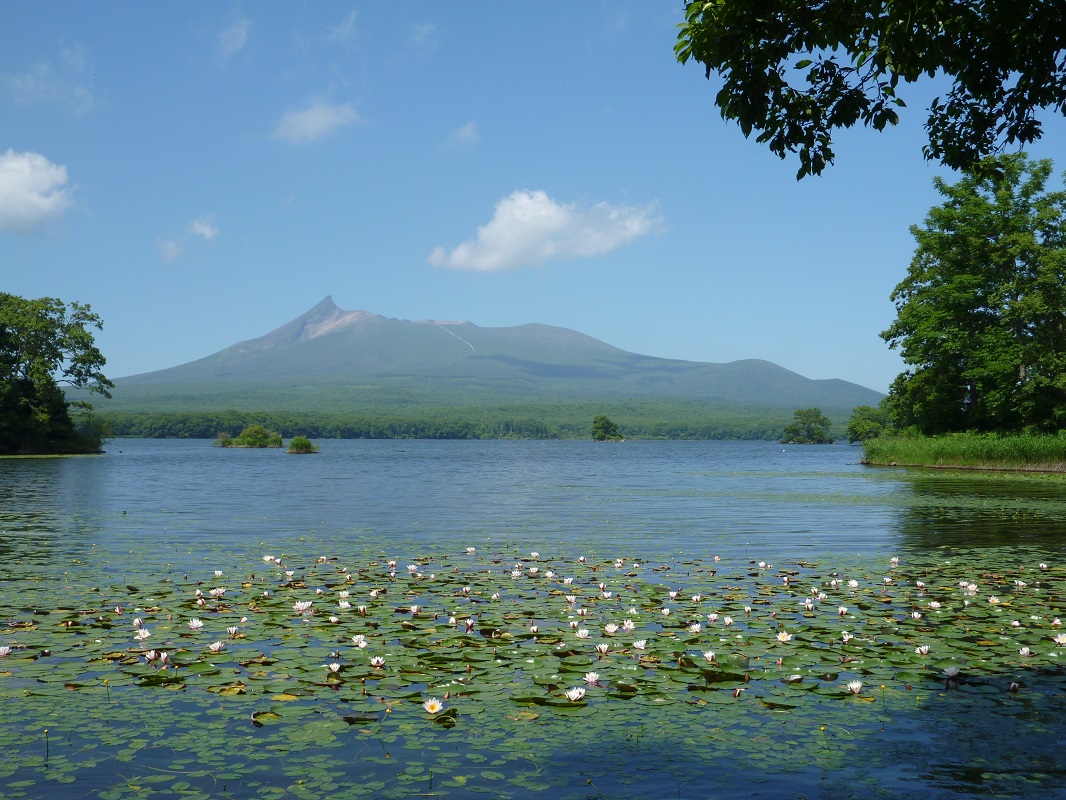 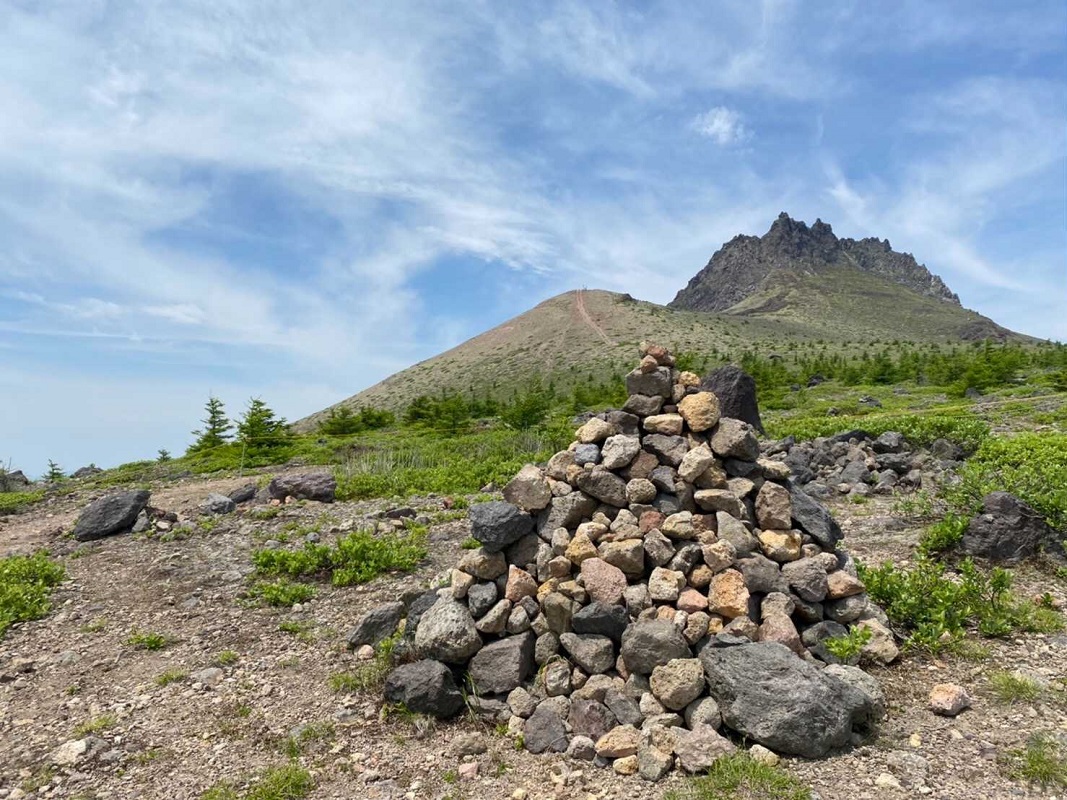 There are several mountains named Komagatake in Japan, so to distinguish them, the Komagatake were talking about here is often referred to as Hokkaido Komagatake or Oshima Komagatake (Oshima is the name of the subprefecture to which the quasi-national park belongs). The highest point of the volcano reaches up to 1,131 meters (3,711 ft) and this steep peak is called Kengamine in Japanese and kayapenupuri (‘sail mountain’) in Ainu. Indeed, the shape of the peak resembles a sail. A gentler peak at the northern side of the mountain is called Sawaradake in Japanese and saraki (name of a local plant) in Ainu.

To learn more about trekking and hiking in Hokkaido, also take a look at our earlier blog posts Akan-Mashu National Park: Hot Springs and Caldera Lakes and Daisetsuzan National Park: The Playground of the Gods.

Kankoma area or Kankomagatake area (an outbound link) refers to the three towns—Shikabe, Nanae, and Mori—around (in Japanese ‘kan’) Mt. Komagatake. The area offers quite a few different outdoor activities, such as kayaking, canoeing, biking, hiking, and trekking. Kankoma area is also a treasure chamber for gourmands, who enjoy fresh seafood and delicious fruits and vegetables. 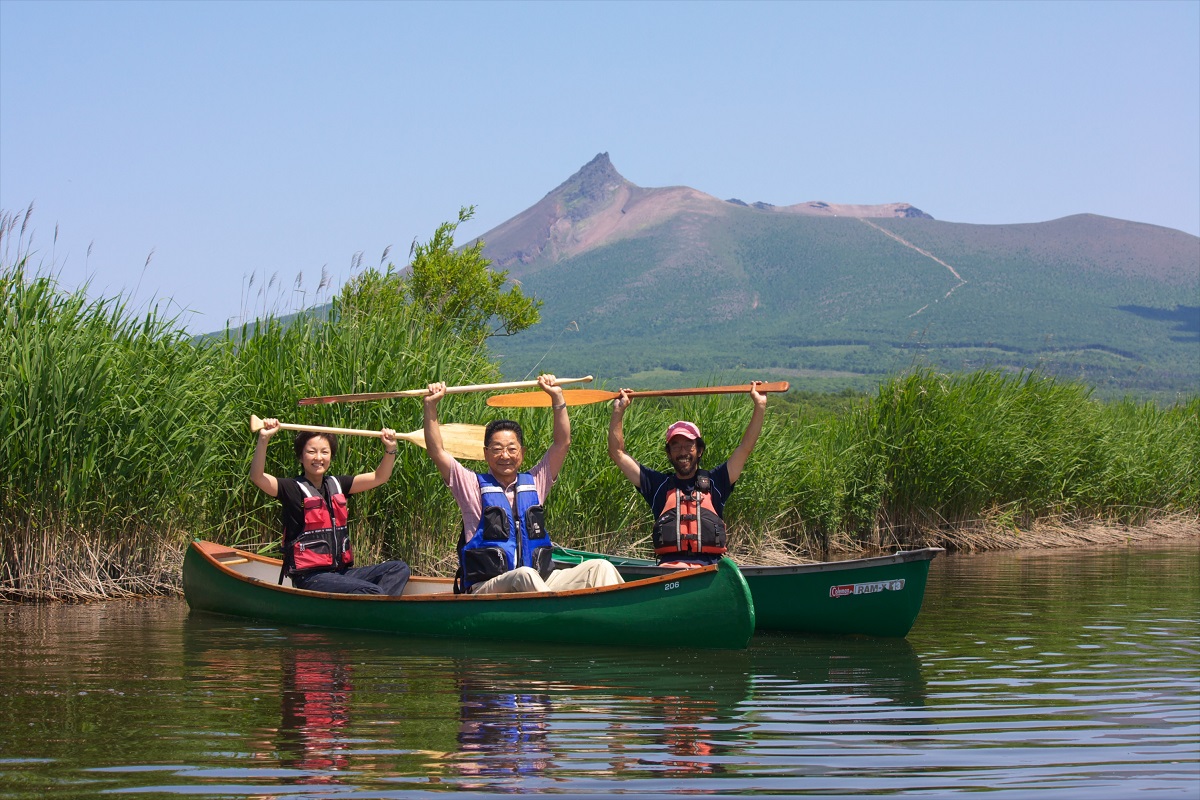 Shikabe (an outbound link) is a fisher’s town with about 3,700 inhabitants south of Komagatake. The main fish catch of the town comes from cod, scallops, and octopus, but the ocean also provides the fishers abundance of kombu seaweed. The name of the town is originally Ainu language ‘sike un pe’, ‘carrying in one’s back.’ It is said that it refers to a nearby mountain carrying a river on its back. Another explanation for the name is that Shikabe was a place where cargo from ships was unloaded and carried further in the mainland. 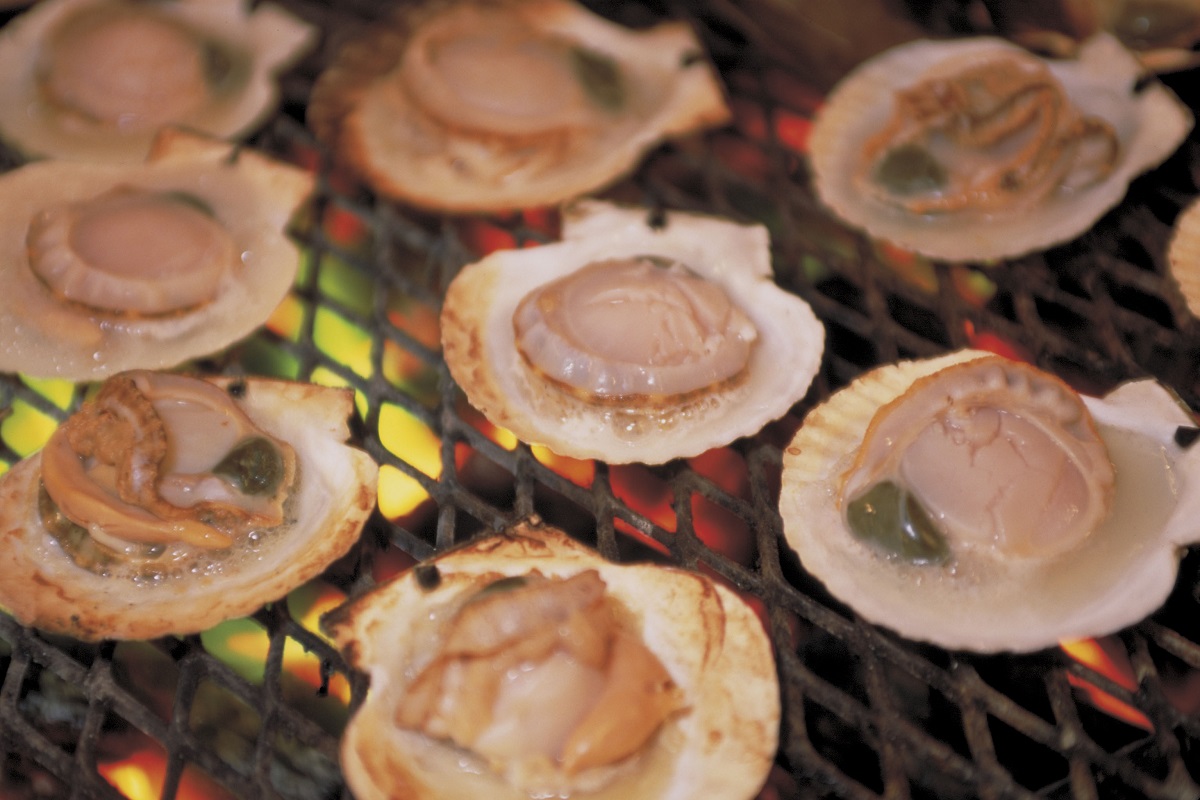 Nanae town (an outbound link) is located 16 kilometers to the north of Hakodate. The name of the town comes from Ainu ‘naa nay’, which means ‘a lot of mountain streams.’ There are about 28,000 inhabitants in the town. The main industry of the town is agriculture, and the main products are fruits, such as apples and grapes, and vegetables such as daikon radish, leek, carrots, and also rice. Nanae is famous for its orchards, especially apples and grapes. Lakes Onuma and Konuma are located within the borders of Nanae town, and one fun activity to try at Nanae is canoeing at the lakes. You can also try a cycling tour in the town. 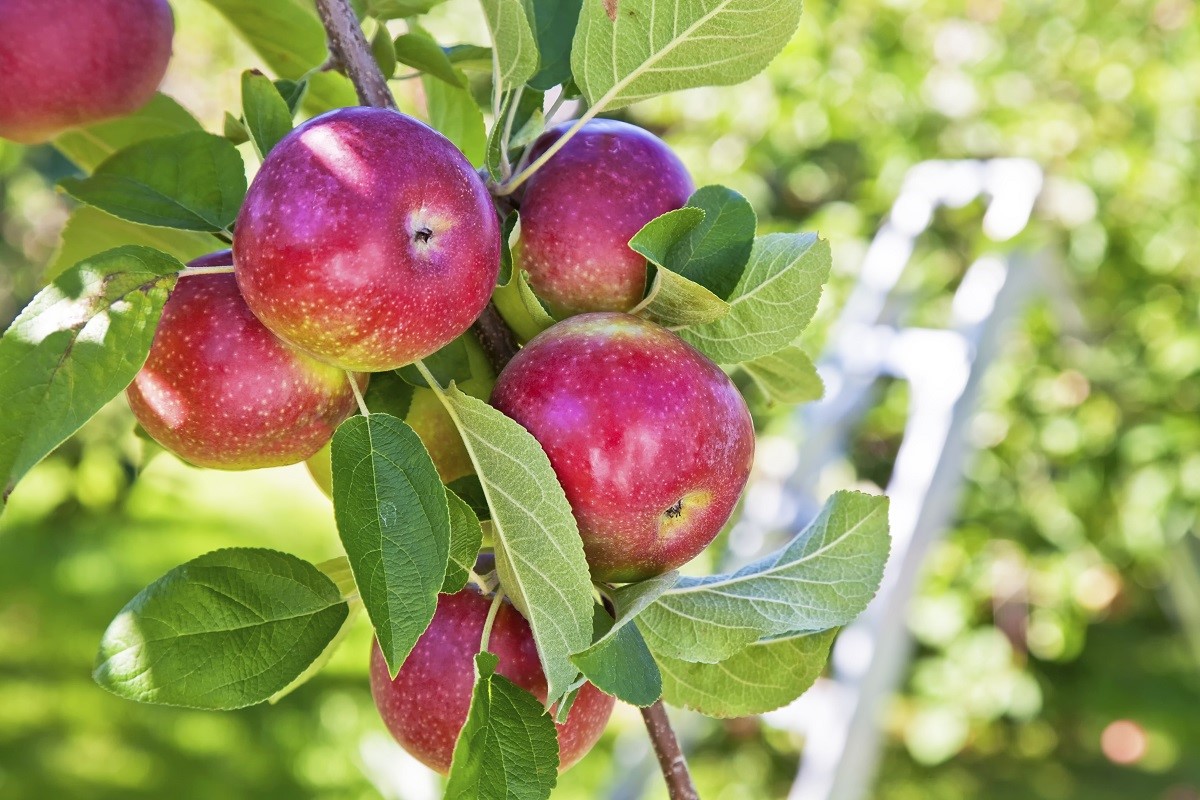 Mori town is located on the northern side of Mt. Komagatake at the shores of Uchiura Bay. The town has about 14,400 inhabitants and its main product is seafood, such as scallops, cod, hair crab, squid, and botan shrimp. This makes Mori a must-visit trip destination for seafood and sushi lovers. A popular dish called Ikameshi—squid stuffed with rice—is originally developed in Mori. The name of the town comes from the Ainu language but it has been translated into Japanese. The original name in Ainu is ‘oniuspet’, that is ‘a river that has a lot of trees growing at its end.’ The Japanese name of the town means ‘forest’ in English, so it is a translation of the part ‘a lot of trees growing’ of the Ainu name.

So what do you think? How about planning your next fall trip to Onuma quasi-national park and the Kankoma area to enjoy the breathtakingly beautiful nature of Japan and savor the local delicacies? If your immediate reaction is ‘yes!’ or if want to ask us some further questions about travel planning, you can always reach us through our inquiry form.