History of Hokkaido: The war of the last samurai in Hakodate

The city of Hakodate is located at the tip of Oshima Peninsula in Japan’s northernmost island Hokkaido. It is the third largest city in Hokkaido and has a long history compared to many other Hokkaido cities. The city is especially famous for being the final battle scene for the Boshin war in 1869 that was a final blow to 250 years of isolation policy in Japan and opened the country fully for international relations and modernization.

Especially important sites during the war were star-shaped Fort Goryokaku and Mount Hakodate. Goryokaku was the site of the final battle between the new government forces and the old shogunate forces during the Boshin war. Mount Hakodate was a strategic point at the end of the battle of Hakodate, and also for a long time afterwards, because the entire mountain was used as a fortress and an observation post.

This blog column focuses on the history of Hakodate and historical travel tours in the city. For a more general introduction of the city of Hakodate as a travel destination and tips for your trip, please see our earlier blog column Hakodate: the southern capital of Hokkaido.

A guidebook approach to Hakodate

If you take a look at any given travel guidebook about Hakodate, the first thing you probably see is the praise for the breathtakingly beautiful night view from Mount Hakodate (an outbound link). Well, as you can see, the guidebooks are not lying! The best time to admire the night view is about 30 minutes after the sunset when the light navy blue dusk slowly covers the whole sky while the city lights one after another light up. However, it is recommended that you arrive at the observation deck already before the sun sets so that you can see how the scenery changes from day to night. The scenery changes also with the seasons: during the fall the skies are often clear but during the summer there is often fog creeping in from the sea, during the winter the cityscape is covered in snow, and during the spring the sea of clouds reflect the colors of the sunset.

The mountaintop and the observation deck area can be easily accessed by a cable car in 3 minutes from the foot of the mountain to the top. You can also drive to the top of the mountain by car, but there are restrictions on access by private car during the peak season in the summer and the road is closed during winter. And of course it is also possible to hike up the mountain. 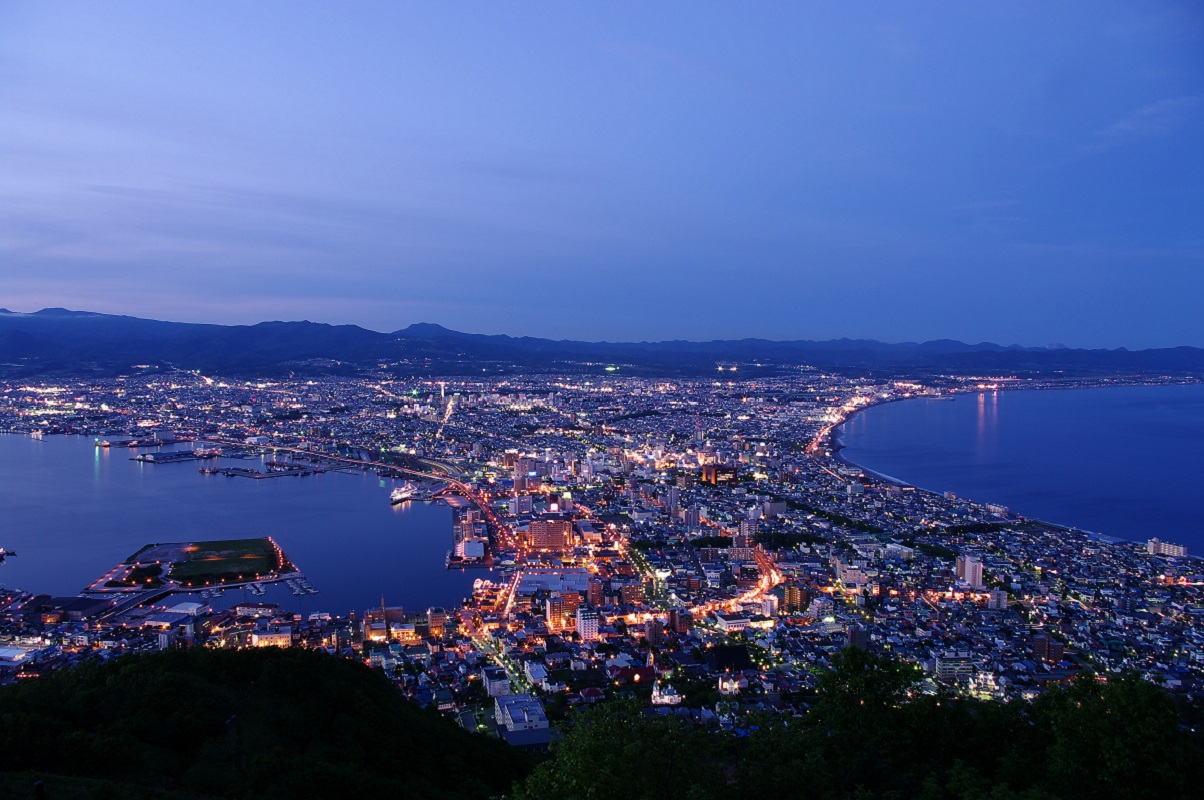 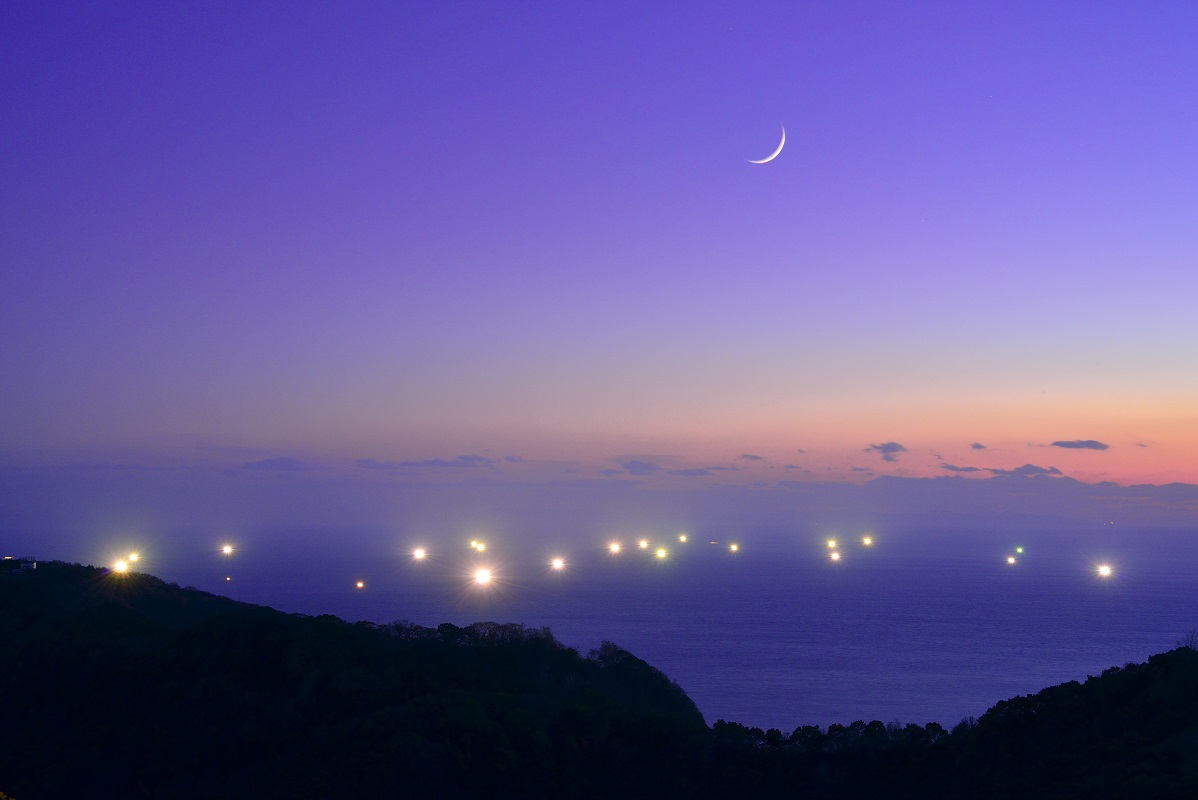 City of Hakodate is surrounded by the sea and it is of course reflected in the local food culture. Be it squid, tuna, hokke (Okhotsk atka mackerel), flounder, or scallops, the meeting point of the warm current from the Sea of Japan and the cold waters of the Pacific Ocean create optimal conditions for fishing. The best way to enjoy these blessings of the sea are kaisendon (a rice bowl topped with sashimi, that is, uncooked seafood) and of course sushi. Especially worth mentioning is Japanese flying squid sashimi that is at its best from June to December. Hakodate is one of the first Japanese port cities to be in contact with western culture in the 19th century and that is also reflected in the city’s food culture.

Another thing where you can see the western influence in Hakodate, is the city itself and its streetscape. The western district stretches between the sea port and Mount Hakodate and you can see for example western style Kanemori red brick warehouses at the bay area (an outbound link). A fun way to get to know the area is to walk along the 19 ‘saka’ (slopes) of Hakodate. The slopes are hilly streets leading from the foot of the Mount Hakodate to the sea port and you can see and feel historical Hakodate at its best while strolling these streets. There are also numerous historical buildings in the western district, such as the elaborately decorated Old Public Hall of Hakodate Ward. 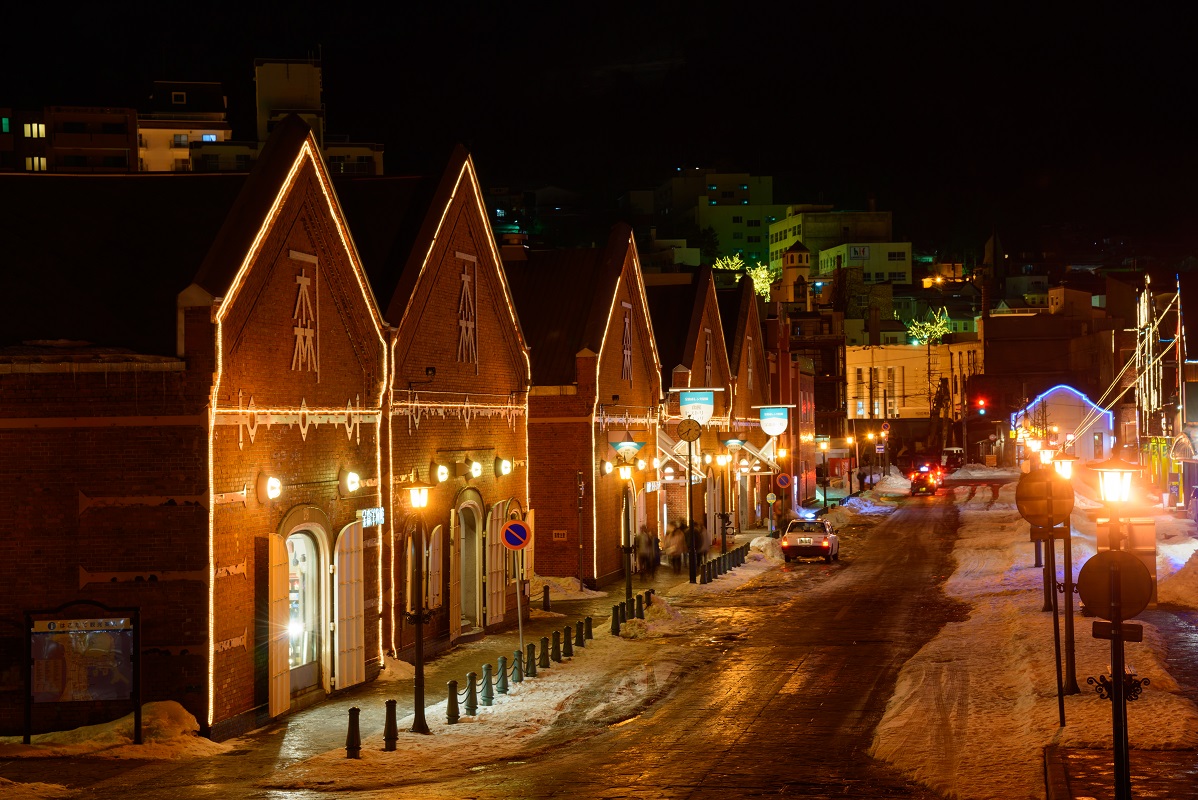 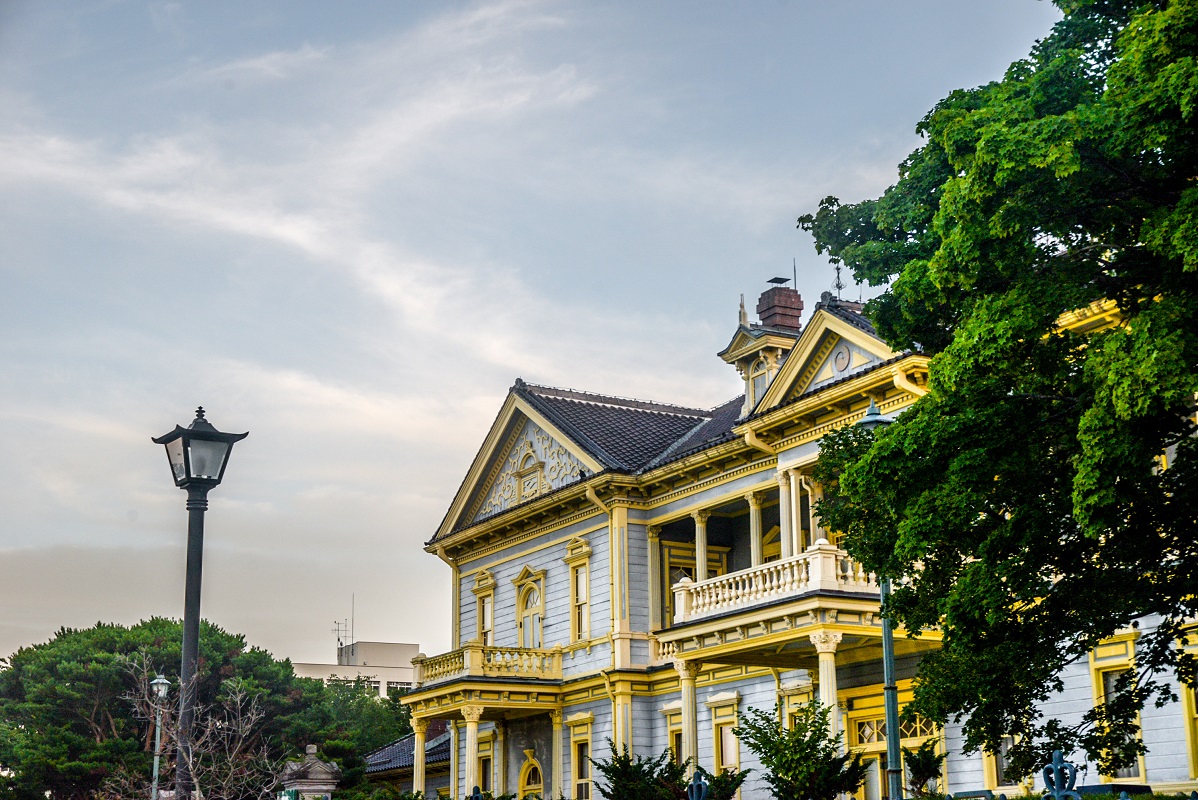 The history of Hakodate the guidebooks don’t tell you about

Hokkaido has been a part of Japan only for a relatively short time; it was annexed to Japan in 1869. Before the annexation, Europeans and Americans wanted for several hundreds years to establish trading relationships with Japan but the Tokugawa shogunate—old feudal government—kept the relationships to a minimum, opening only a handful of ports for foreign trade and for selected partners only. This sakoku or closed country policy lasting for about 250 years ended in 1853, when United States Commodore Matthew Perry with this fleet of ‘black ships’ arrived at Edo bay (current Tokyo bay) and threatened to start a war with Japan if his fleet are refused to enter the port. The following year, Japan reluctantly decided to start to open up and Hakodate was one of the first cities to engage to foreign trade.

However, the foreign pressure and threat of war did not end there. Europeans and Americans were aggressively spreading their influence and establishing colonies in South East Asia. In the north, the Russians took over Siberia and when they started to approach the eastern Siberia, the Japanese felt an urge for action. Hokkaido was annexed as a buffer zone between the Japanese mainland and the spreading Russian power in the north.

All this, however, did not happen smoothly without any debate and conflict within Japan. Opening up meant also an influx of Western ideas and modern inventions to Japan. One of the disputes was how to arrange the governing of Japan: should the old system of emperor being just a symbol and daimyo samurai warlords holding the true power continue or should the emperor be the actual leader of the country. The result was that imperial rule was restored in 1868 in so-called Meiji Restoration and the Tokugawa shogunate was stripped of its power. However, this change of power did not happen peacefully but led to a civil war known as the Boshin war. The last battle of the war was fought in Hakodate between the new government forces and the old shogunate forces. 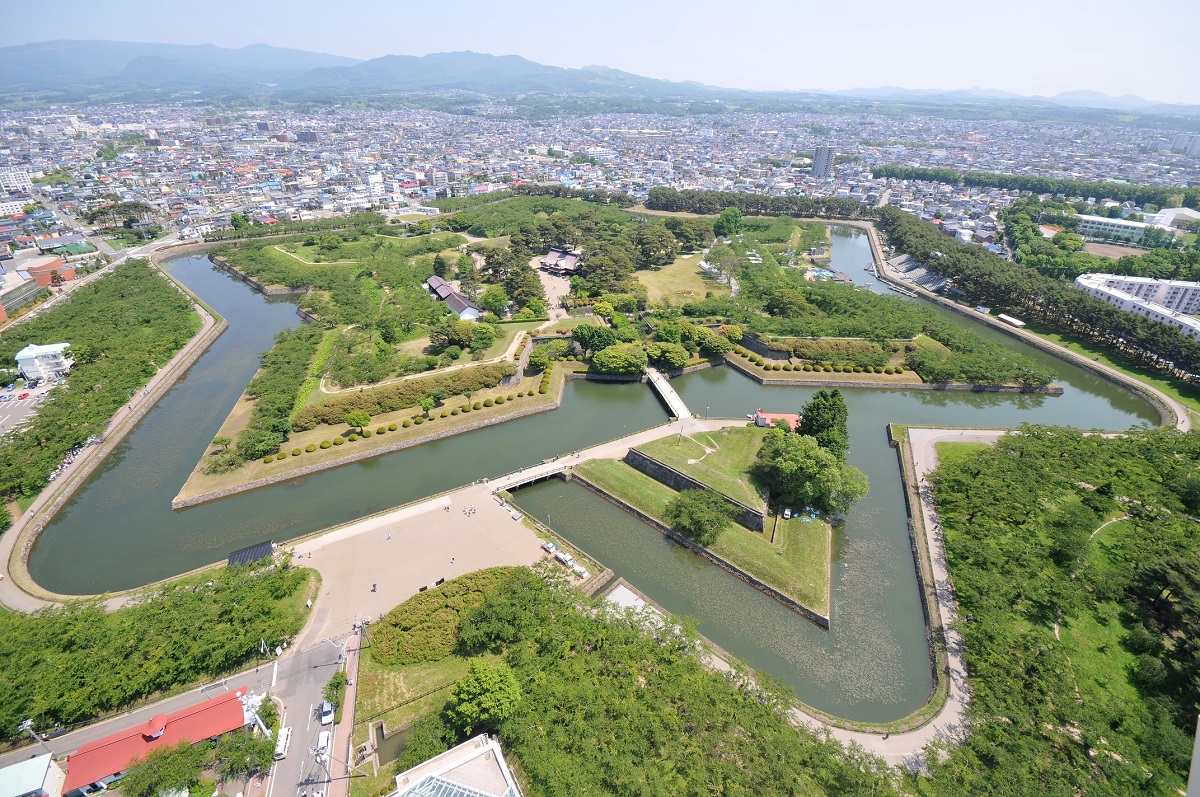 The internal turmoil in Japan connected to the end of seclusion policy led to a civil war called the Boshin war lasting from the New Year’s Eve 1868 to mid-May 1869. The battle started in Kyoto and moved to Edo (current Tokyo) . There the old shogunate army was almost completely destroyed by the new government forces. The remaining old shogunate supporters gathered and fled to the north to Ezo (current Hokkaido) where they eventually took control over Hakodate and its surroundings and announced the establishment of the Republic of Ezo, making Goryokaku their headquarters. The new Japanese government, however, did not accept the new republic and started a counterattack, quickly taking over the area surrounding Hakodate. The final battle was fought in Hakodate and Goryokaku and the old shogunate supporters finally surrendered on May 18 1869.

Shortly after the Boshin war ended, Ezo was annexed to Japan and renamed Hokkaido. Hakodate continued to be an important military site. Mount Hakodate (334 m) gives an excellent view of the sea around Hakodate. That is why the whole mountain was made into a fortress and an observation post in 1898. The fortress was used for about 50 years, until 1946. During that time, it was of course forbidden for civilians to enter the mountain and the mountain was also erased from maps and photographs. Today, however, there is free access to the mountain or rather mountains, because what is called Mount Hakodate is not just a single mountain but a row of 13 mountain peaks. The ruins of the fortress and other facilities in the mountains were designated as heritage sites of Hokkaido in 2001.

If you are interested in samurai and the history of Hokkaido, take a look at another blog column of ours, Yakumo: The town of samurai and rice.

Visiting Fort Goryokaku is a must-do during your Hakodate trip but how about taking the visit to another level and going together with a local guide who knows all about the history of the fort?  You will get so much more out of your visit to Goryokaku tower, the park surrounding the tower, and Hakodate Magistrate’s Office when accompanied by one of the knowledgeable guides. Goryokaku was the site of the last stages of the Boshin war where the last samurai joined forces with French army and navy officers and defended the fortress against Japan’s imperial troops. Add a guided tour at Fort Goryokaku to your trip plan and let your guide tell you the intriguing details.

Mount Hakodate is famed for its breathtaking night scenery but there are also other ways to explore the mountain and its historical usage as a canon battery and fortress. The location of each battery is not marked with any signs, but with the knowledge of a local guide you can find them easily and explore the ruins of the fortress scattered here and there on the mountains. The only way to reach these ruins is by foot, so be sure to wear your hiking shoes. However, the slope is not steep and the hike is suitable also for inexperienced hikers. 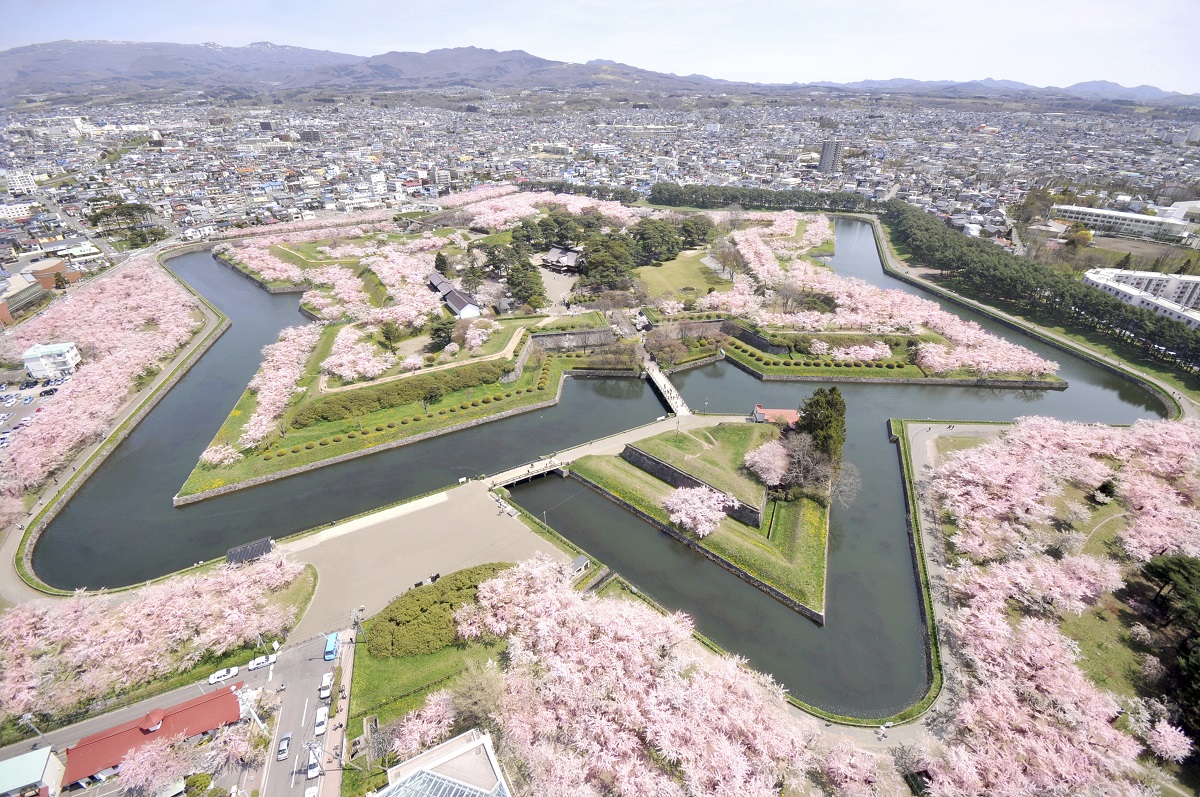 Example travel itinerary in and around Hakodate

Fort Goryokaku in Hakodate is not only known for its history but it also is a popular cherry blossom viewing site in the spring. If you are planning a trip to Hakodate in late April or early May, be sure to combine your guided historical tour with a hanami cherry blossom viewing picnic or a barbecue party at the Fort’s park. When in Hokkaido, the type of barbecue is of course Jingisukan: a mix of delicious mutton and fresh vegetables.

Since Hakodate was one of the first cities to open after Japan’s ‘closed country’ isolationist policy ended, the city has been an international meeting place for a long time and there also are many buildings that have taken influence from foreign, mainly European, architecture. This means taking a guided walking tour around the city is an excellent way to get to know the history of the city and explore the beautiful cityscape of Hakodate. Another wonderful way to get to know the local culture and history is through food. We can guide you to the restaurants that offer the best of the best from Hakodate cuisine. If you would rather get even deeper into the food culture, you can take a cooking class together with a local instructor and learn how to make the delicacies from scratch.

If you feel that Hakodate deserves to be your next dream travel destination, let us know in the inquiry form!